91mobiles.com
Home Comparisons OnePlus 10T vs iQOO 9T: which flagship phone should you spend your... 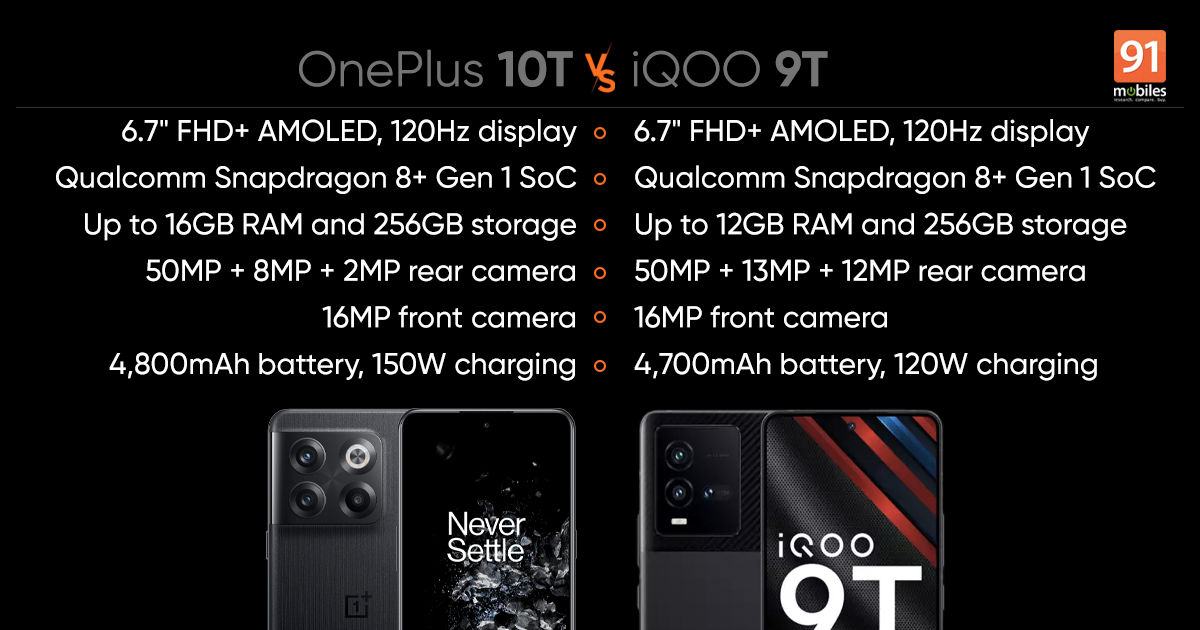 The newly launched OnePlus 10T and iQOO 9T have arrived in India in the race to be the next flagship killer. Both phones have comparable specifications and are powered by Qualcomm’s newest Snapdragon 8+ Gen 1 SoC. Looking only at hardware, the iQOO 9T seems to offer a more versatile camera setup, while the OnePlus 10T offers faster-charging speed. But let’s take a closer look at what the two flagships offer in our OnePlus 10T vs iQOO 9T comparison.

On the other hand, the iQOO 9T comes in two variants. The base model comes with 8GB RAM with 128GB storage and is priced at Rs 49,999, as of writing this article. Its higher spec’d model with 12GB RAM and 256GB storage option will cost you Rs 54,999.

The OnePlus 10T is available on Amazon and will also be available offline through the company’s own stores as well as other multi-chain retail outlets like Reliance Digital and Croma. iQOO 9T, on the other hand, is now an online-only device sold on Amazon, although the company did announce future ambitions to expand into the offline arena.

In terms of design and feel, both phones are pretty modern. The OnePlus 10T borrows design aspects from its older sibling, the OnePlus 10 Pro. From the rear camera island to the curved back, the phone now has a flat panel on the front. Since there is a distinction between the two phones, OnePlus has undoubtedly cut corners by opting for an all-plastic design, which they claim is due to the phone’s 360-degree antenna. The classic Alert Slider, the company’s switch to change between Ring, Silent, and Vibrate, has also been abandoned in favour of a bigger battery. The phone also lacks wireless charging and a headphone jack, but it does include an in-display fingerprint scanner. 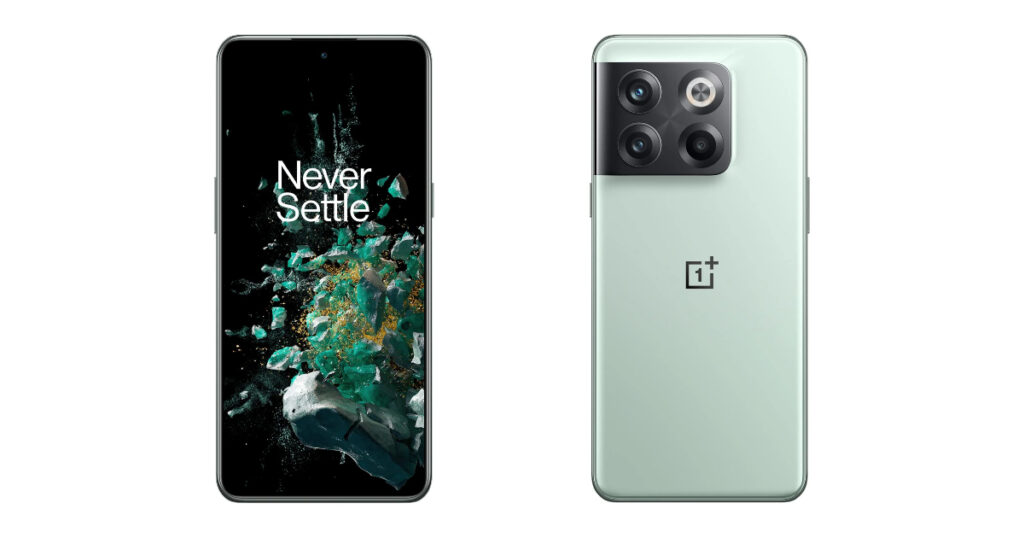 The iQOO 9T, on the other hand, receives a new look with a two-tone finish. iQOO has also lavished the phone with materials, including an aluminium mid-frame and textured glass on the rear. When the phone is flipped over, the massive camera module with triple lenses stacked in a recognizable pattern is seen. It boasts several cool features, such as a carbon fiber design on the back, a textured power button, and superb weight distribution. In comparison to the OnePlus 10T, the 9T is unquestionably larger and better built.

The Snapdragon 8+ Gen 1 SoC, Qualcomm’s most recent flagship processor, powers the OnePlus 10T. When compared to the previous generation chip, this new chip promises to produce superior thermal performance and boost overall efficiency by 30%. The phone is available in three memory configurations: 8GB LPDDR5 RAM and 128GB UFS3.1 storage, 12GB RAM and 256GB storage, and the most expensive 16GB RAM and 256GB storage.

The iQOO 9T, in contrast, comes in two RAM variants and is also powered by the Qualcomm Snapdragon 8+ Gen 1 SoC. The phone is available in two memory configurations: 8GB LPDDR5 RAM and 128GB UFS3.1 storage, & the top-end 12GB RAM and 256GB storage model.

The display is where both phones differ slightly. The OnePlus 10T is using a 6.7-inch E4 10-bit AMOLED display with a Full HD+ resolution. OnePlus refers to this panel as ‘Fluid Display,’ which means that the panel can dynamically switch between 60, 90, and 120Hz refresh rates. This screen is the same as the one used in the OnePlus 10R and is HDR10+ certified. 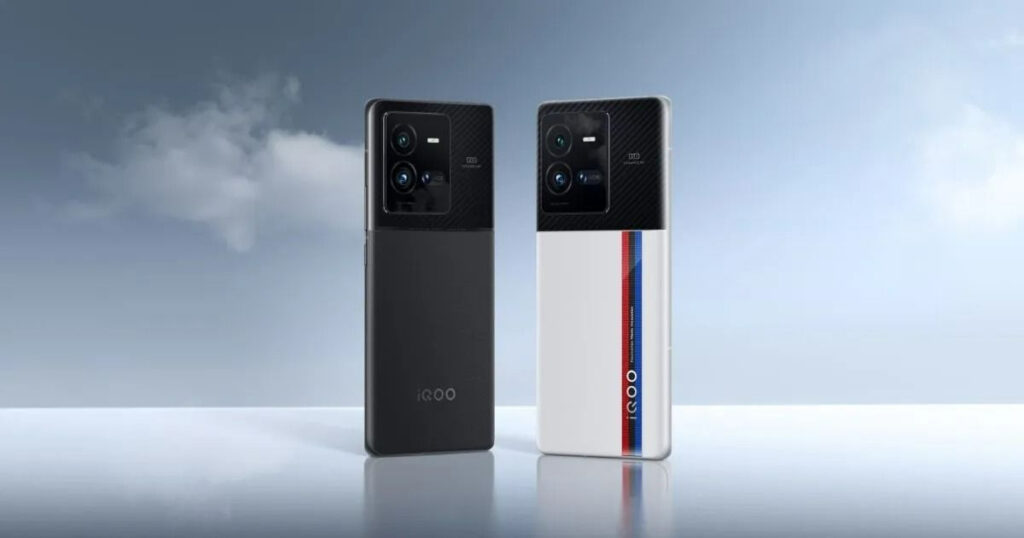 On the other hand, iQOO has chosen to go with a 6.7-inch E5 8-bit AMOLED panel with a Full HD+ resolution. The panel used here can also dynamically switch between 60, 90, and 120Hz refresh rates and gets HDR support on the major OTT apps.

On the back, the OnePlus 10T features a triple camera setup. OnePlus has used the same camera setup in its mid-range products. The sensor is a 50MP Sony IMX766 with an f/18 aperture, OIS, and EIS capability, as well as an 8MP ultrawide angle lens and a 2MP macro sensor with a dual-LED flash. A 16MP camera on the phone is in charge of selfies.

The iQOO 9T, on the other hand, has a more diversified camera arrangement. A 50MP Samsung GN5 sensor with OIS and EIS capabilities, a 13MP ultrawide angle lens, and a 12MP telephoto shooter with a dual-LED flash comprises the rear camera combination. The selfie camera, like the one on the OnePlus 10T, is 16MP. iQOO also takes the lead in the camera space by including an in-house designed V1+ chip that aids the camera in low-light scenarios.

In terms of connectivity, the OnePlus 10T comes with dual-band 4G and 5G support, dual-band Wi-Fi, Bluetooth 5.3, GPS, and USB Type-C for data transfer. The highlight here is the support for 11 5G bands for Global connectivity and the 360-degree antenna for better connectivity.

Coming to the iQOO 9T, the phone comes with dual-band 4G and 5G support, dual-band Wi-Fi, Bluetooth 5.2, GPS, and USB Type-C for data transfer. However, the phone skimps on additional 5G bands and gets support for just 12 bands in total.

Both phones lose out on a 3.5mm audio jack but gain an in-display fingerprint sensor.