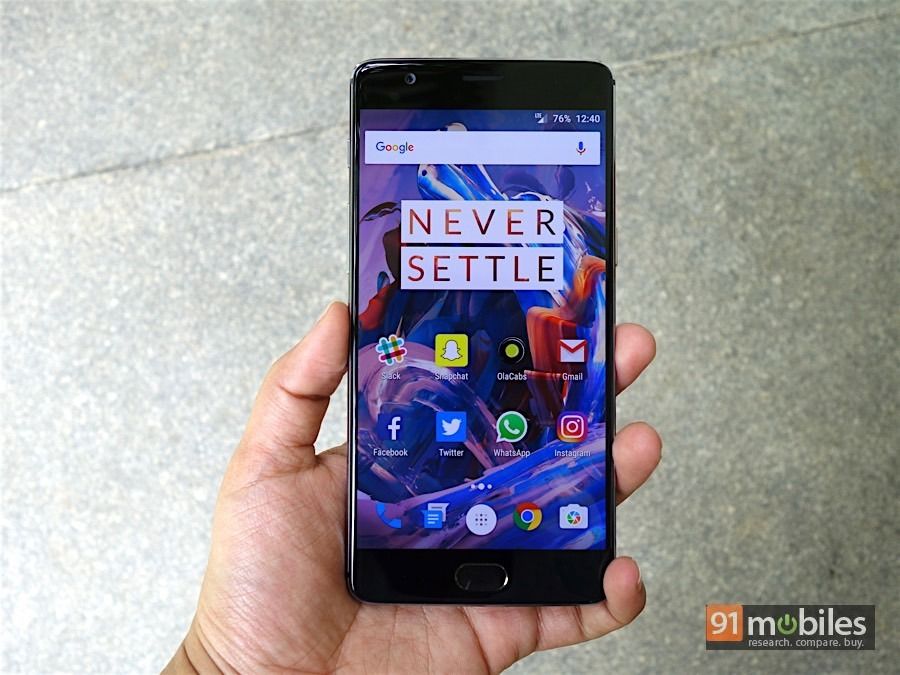 “All you wanted to know about OnePlus’ latest flagship”

HYPE. OnePlus sure knows a thing or two about this, and it has proven it time and again. It had a runaway hit in the form of the OnePlus One (review), while both the OnePlus 2 (review) and the compact OnePlus X (review) were also quite compelling for what they brought to the table. With the passage of time however, the stakes have gone up significantly, and it’s becoming tougher by the day for smartphone brands to differentiate their offerings. And in a crowded, highly competitive, and price sensitive market like India, heroes are born every day, fizzling out just as quickly. The Rs 20k to Rs 30k price band has been a tough one to grasp for almost everyone involved – right from the vendors to the consumers. This is the price segment where brands like Samsung, LG and HTC position their mid-range offerings, but this is also where others like Xiaomi, Lenovo, ASUS, Honor, LeEco and OPPO have their flagships… making things difficult for anyone out in the market for a new daily driver. The new OnePlus 3 lands in the same price range, but right from the get go, seems to get a few things right… things that may very well end up making it a blockbuster. And build hype around it. 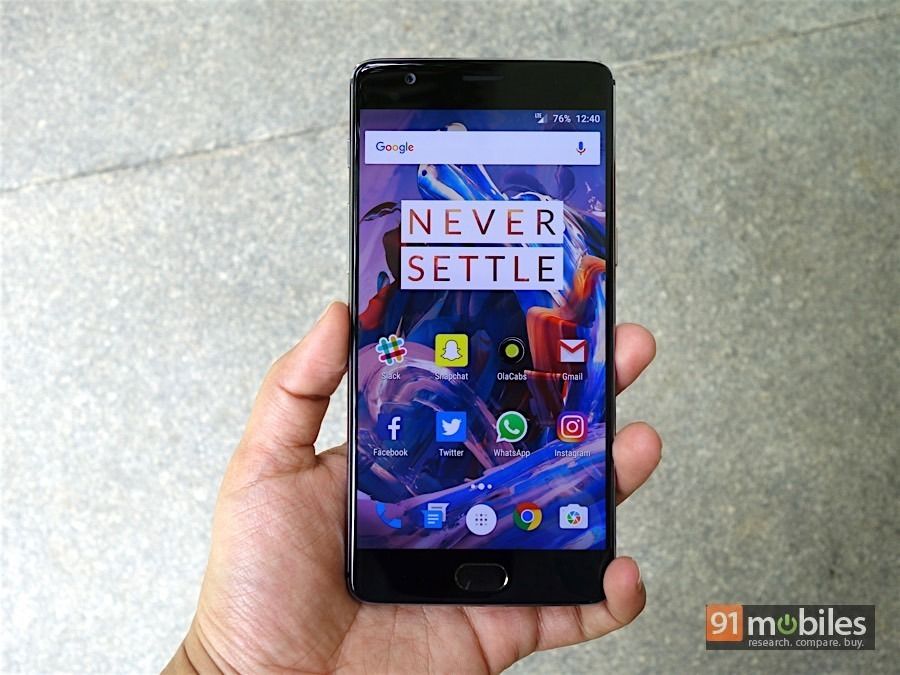 In one sense, the OnePlus 3 doesn’t really have anything out of the ordinary… at least compared to other existing and expected flagships. It’s crafted from metal, brings powerful innards, sports cameras that look capable on paper, and boasts the same features which are expected from a flagship. That said, us Indians like our food spicy, and our smartphones loaded… and the OnePlus 3 hits bull’s eye with one big spec that’s still new for us – and that’s its massive 6GB of RAM. While others like the LeEco Le Max 2 (first impressions), and the upcoming ASUS Zenfone 3 Deluxe (first impressions) also boast the same spec, they are yet to land. And anyway, this is OnePlus we’re talking about here… the same brand that has almost patented hype, so to speak, and enjoys an enviable fan following on a global level. Let’s take a detailed, closer look the OnePlus 3 and its features, presented in a handy QnA format.

So what specs does the OnePlus 3 boast?

For your money, you get a smartphone encased in a body fashioned out of a single slab of aluminium alloy. Up front, there’s a 5.5-inch Optic AMOLED display, bearing a resolution of 1080p. Inside, a quad-core Snapdragon 820 processor purrs, with two cores clocked at 2.2GHz and the other two ticking at 1.6GHz. The processor is mated to a whopping 6GB of RAM – making the OnePlus 3 the very first smartphone to be available in India with this class-leading spec. There’s 64GB internal storage, which is non expandable. A 16MP Sony sensor with PDAF and optical image stabilisation handles photography, while an 8MP shooter is present on the front. A fingerprint scanner crafted out of ceramic is embedded into the home key below the screen, and promises to unlock the phone from standby in under 0.3 seconds. OnePlus says its accuracy improves over time, so it actually gets better at recognising your fingerprints the more you use it. A 3,000mAh battery with OnePlus’ Dash Charge tech powers the show, and the brand says that it can be charged up to 60 percent levels within 30 minutes. 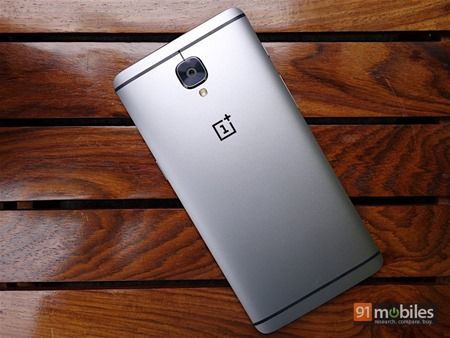 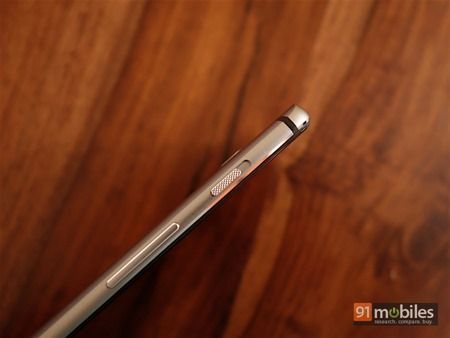 In one word – super. The all-metal bod looks quite premium, and the phone is just 7.35mm thick. Encased in anodised aluminium, the OnePplus 3 sets the bar high in terms of smartphone construction. It features rounded corners and a gently curving rear that makes the phone ergonomic to hold. Up front, the 2.5D curved display, and super slim bezels add to the sleek look. On the side, you get OnePlus’ signature alert slider switch that cycles between three notification profiles – all, priority and none.

Does the OnePlus 3 screen come with a layer of Gorilla Glass?

Yes, the 5.5-inch screen on the OnePlus 3 comes with a layer of fourth-gen Gorilla Glass. The brand even throws in a screen protector pre-installed on the device.

What’s the SIM size supported by the OnePlus 3? 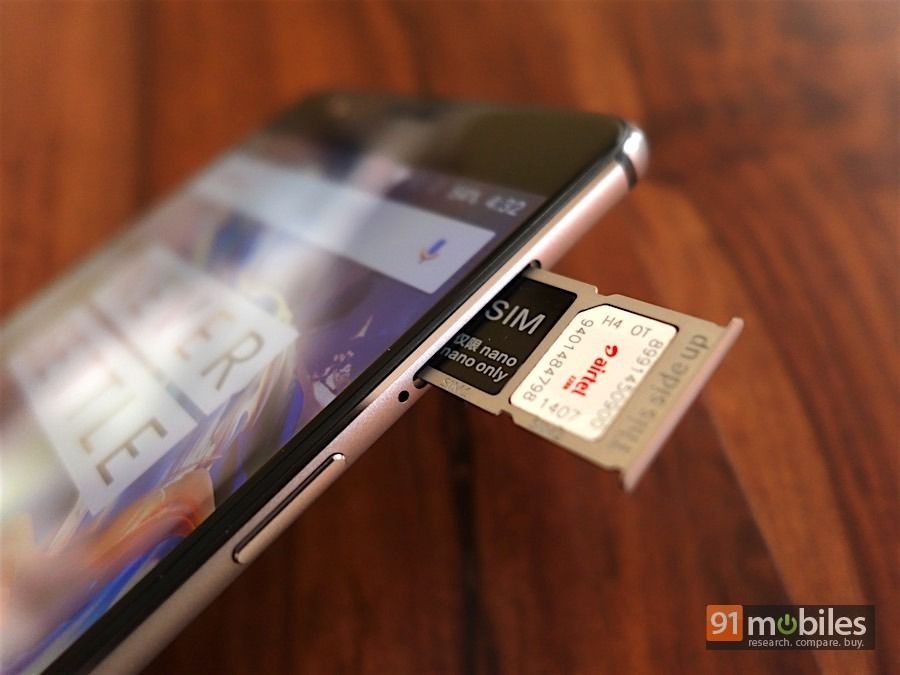 The OnePlus 3 is a dual-SIM, dual standby device, and accepts a pair of nano-SIMs in a tray on the side.

The answer to that is yes.

Does the OnePlus 3 support 4G? What about the other connectivity options on offer?

Cat 6 LTE is supported, and the model available in India supports the following 4G bands:

The other connectivity options include dual-band Wi-fi 802.11 ac, Bluetooth 4.2, GPS and GLONASS.

How much storage is available to use on the OnePlus 3? Can I add more? 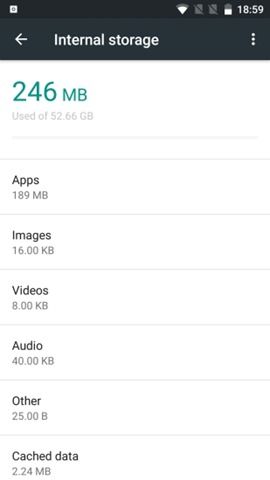 Almost 52.5GB is available to use for your own apps and content on the OnePlus 3, out of the 64 gig storage which is built it. Unfortunately, there’s no way to add more.

What sensors does the OnePlus 3 come with?

What can you tell me about the cameras?

The rear cam on the OnePlus 3 sports a 16MP Sony PDAF sensor with f/2.0 aperture and support for 4K video. Time lapse and Slow-mo videos can be captured as well. At the front, you get an 8MP fixed focus shooter with f/2.0 and 1080p video capabilities. Apart from Phase Detection Autofocus that promises to focus and shoot in under 0.2 seconds, the rear camera also features optical image stabilisation to eliminate blur. In addition, the incorporation of electronic image stabilisation claims to add digital stability to videos. The phone is capable of shooting RAW stills too. 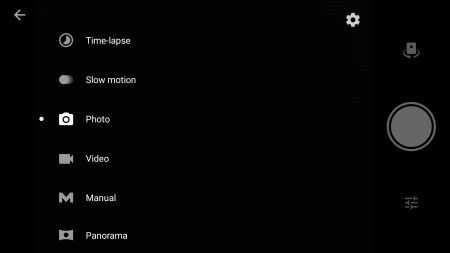 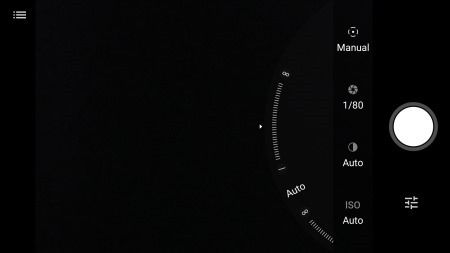 The app features include a manual mode that let you tweak various shooting parameters, while the other features include Auto HDR, smile capture and an HD mode that claims to enhance image clarity and detail. A feature called Dynamic De-noise is said to work automatically in the background to reduce noise in post-processing. We’ll have a detailed camera review out shortly to let you know how well the OnePlus 3 can shoot.

What about the software platform and its features? 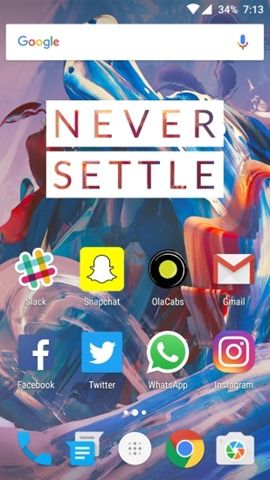 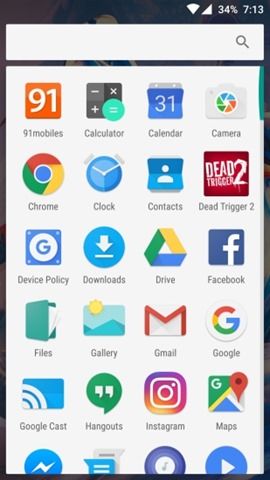 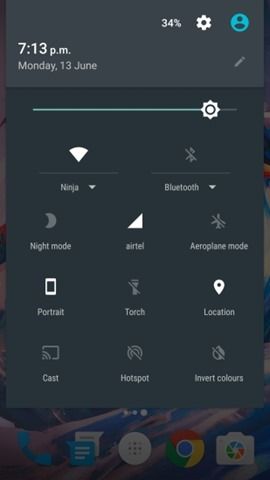 The OnePlus 3 runs the brand’s OxygenOS, and the base is Android Marshmallow. As we’ve seen earlier on the OnePlus 2 and the X, OxygenOS is quite similar to Cyanogen OS in its approach, and offers a near-stock UI. However, you also get a variety of customisation options, tweaks and controls. Custom icon packs are supported, while other options include a dark mode for night time viewing, custom LED notifications, accent colour customisation, quick settings and the ability to change the quick settings and status bar icons. 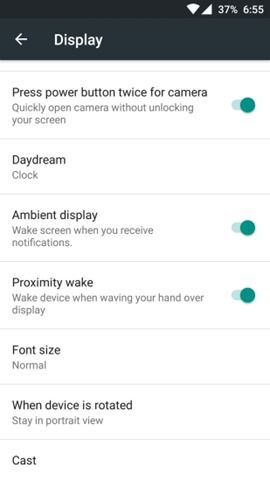 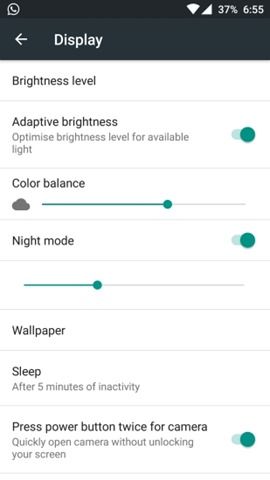 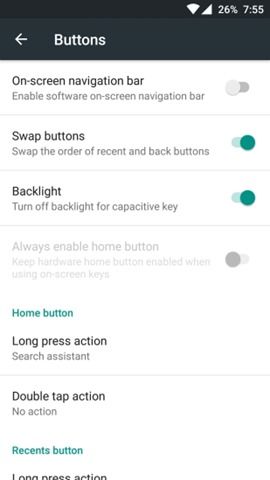 Android’s ambient display feature is there as well, lighting the screen up with white on black, low-power alerts when notifications arrive. You can even wake up the screen just by waving your hand in front of the proximity sensor. The functions of the navigation keys can be swapped, and you can choose to enable onscreen navigation buttons if you like. 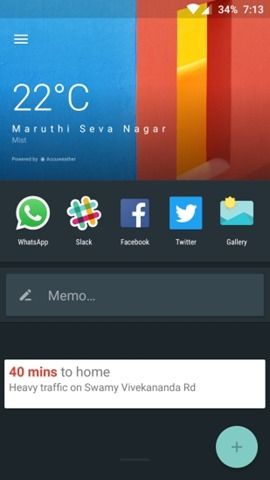 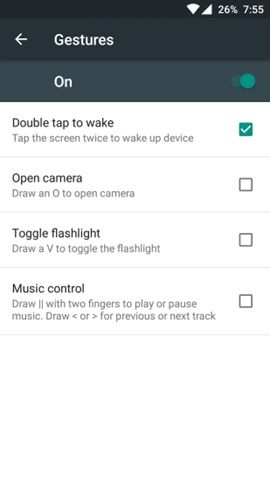 One of the highlight features of OxygenOS is Shelf, and this has received a refresh. As usual, it occupies place of pride as a dedicated panel that slides out when you swipe right on the home screen, and gives you access to recently-used apps and contacts, write quick memos, and add the widgets you want. The platform also gives you immense control over app permissions, while screen-off gestures like double tap to wake, launching the camera or flashlight and controlling music straight from standby are around too.

What’s included in the retail box? 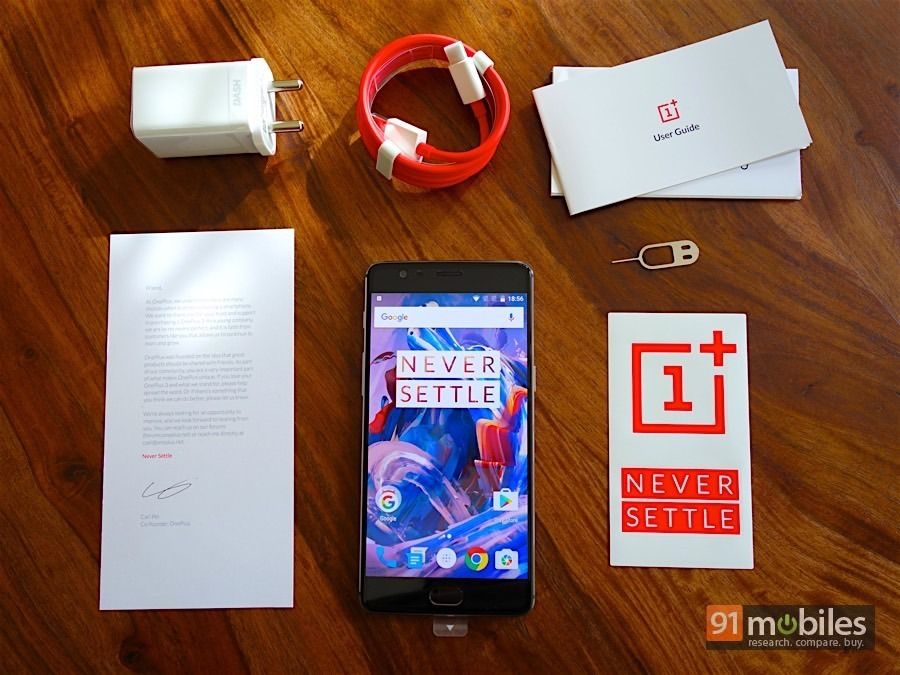 Apart from the phone, the box includes the documentation, a SIM eject tool, OnePlus’ signature red cable with USB and Type-C connectors at either end, and a two-pin wall charger rated at a whopping 4A (featuring the brand’s Dash Charge quick charging tech). No headphones are included.

Any info on accessories? 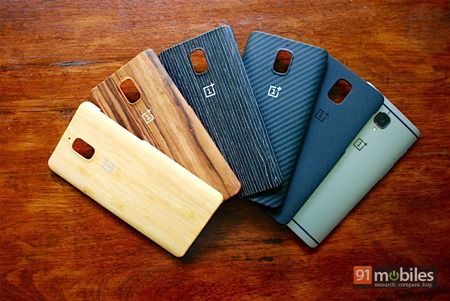 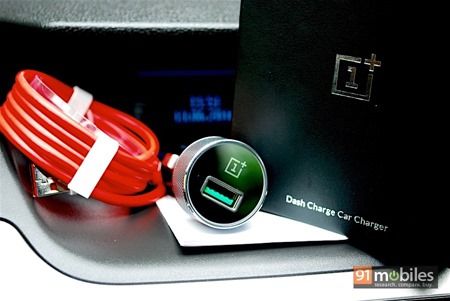 Oh yes. First up, OnePlus will be offering back covers for the new phone in various finishes, including bamboo, kevlar, and sandstone. These should be available to buy around the same time the OnePlus 3 goes on sale, but we don’t have an idea of their pricing yet. A car charger that supports Dash Charge will also be available as an optional accessory.

What are the damages and how I can buy a OnePlus 3? 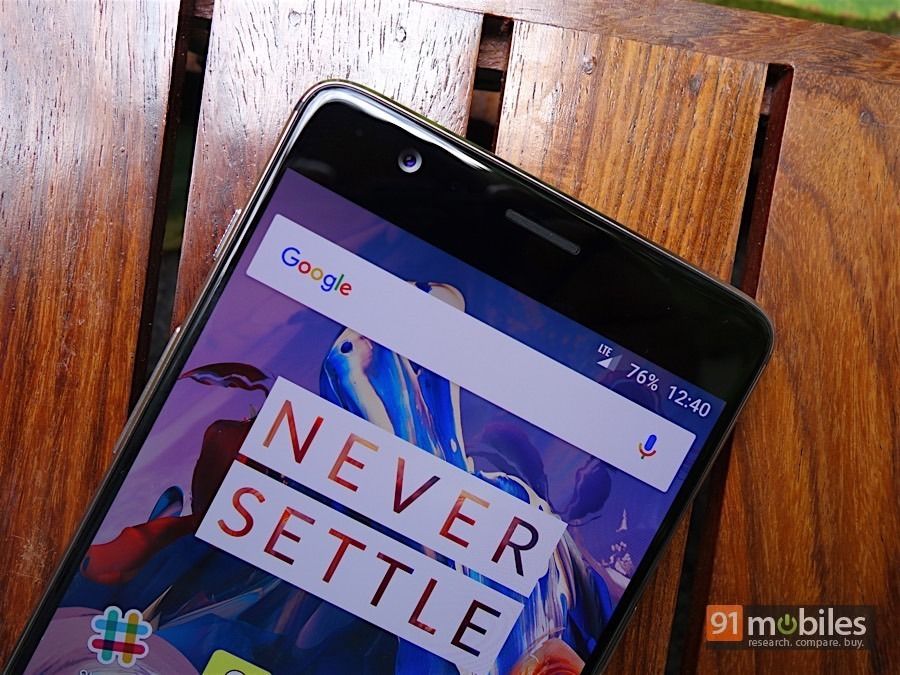 The OnePlus 3 can be yours for Rs 27,999, and will be available to buy in graphite via Amazon India, which is the exclusive sales partner. The online sales are slated to begin at 12.30 am on June 15th. A soft gold hue will come later. OnePlus is known to use an invite-based selling model for its devices, but this time around, the brand has chosen to not use the same. So the phone should be available to buy via Amazon directly, but we expect limited stocks and high levels of excitement from those interested to buy. Act fast if you want to get your hands on it.