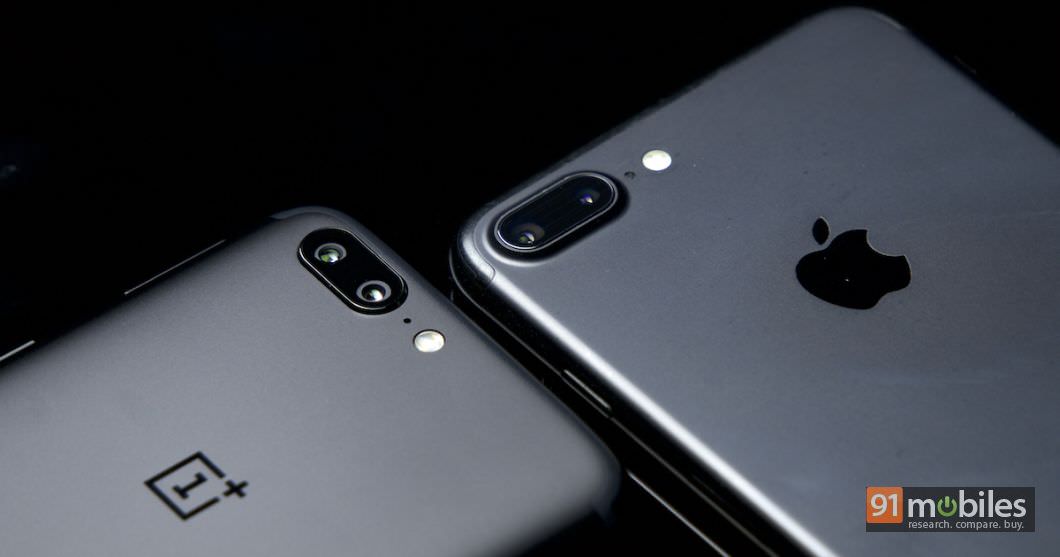 The OnePlus 5 (review) is finally here and it rocks dual cameras on the rear. The cameras work in tandem to take better portrait shots with an enhanced depth-of-field effect and the secondary camera can also do 2x lossless zoom. Can you think of any other phone that works in a similar fashion? Yup, you guessed that right: we are talking about the Apple iPhone 7 Plus (review). So, it made complete sense that we pit the two against each other to find out which one comes out on top.

The Apple iPhone 7 Plus has a 12MP f/1.8 primary camera and another 12MP f/2.6 secondary. Not much is know about the sensors, except for the fact that the secondary sensor could be smaller than the primary one.

Now, let’s get down the the brass tacks – the actual image performance.

Both the phones use the available camera hardware in tandem with some clever software tricks to achieve the so-called “true 2x lossless zoom”. We compared the results on both.

In the wide shot, you will notice that iPhone tends to favour muted colours and the OnePlus 5’s colours are more accurate, especially the greens. The colour temperature preferred by the software algorithms – on the OnePlus 5 and the iPhone 7 Plus – is on the warmer side and quite similar really. But, the OnePlus 5’s shot edges out the iPhone 7 Plus’ in one aspect – the details captured. OnePlus 5 offers more details around the edges of the leaves of the trees, whereas the iPhone 7 Plus struggles to grab information from the shadows. Clearly, the engineers at OnePlus has worked overtime to tune the cameras to be flagship-class. This is particularly impressive for a smartphone that undercuts the price of other flagship smartphones by a big margin.

However, when we compare the telephoto samples, we see a completely different picture (no pun intended). The iPhone 7 Plus’ secondary camera reproduces a warmer colour temperature overall but it is packed with details. While the OnePlus 5’s secondary camera can capture a decent amount of details, it struggles to retrieve information from the shadows in dense areas. Also, it is easy to notice a fairly higher amount of noise in the OnePlus 5 shot on closer inspection.

To sum it up, while the primary camera on the OnePlus 5 produces a better image than the iPhone 7 Plus, the iPhone’s telephoto lens manages to capture an image packed with more details at 2x zoom.

Just like iPhone’s Portrait mode for a heightened depth-of-field effect, OnePlus uses the power of dual cameras for attractive Portraits. However, during our testing we noticed something very peculiar.

In the iPhone 7 Plus sample, you will notice that we have a closer crop of our team’s go-to writer Prateek – who, incidentally, has secret modelling aspirations apart from being a writer. What this means is that Apple makes use of the full focal length of the telephoto lens for the depth mode. On the other hand, the OnePlus 5’s sample was shot at 24mm focal length (35mm equivalent) compared to the 56mm focal length used by the iPhone 7 Plus. Now, we don’t know why OnePlus didn’t choose to use the closer crop for the Portrait shot but it is not necessarily a bad decision; it is merely a curious one.

As for the actual quality of the portraits, we preferred the iPhone 7 Plus’ shot. When viewed at full resolution, it is evident that the iPhone captures more details on the face. The focus on the OnePlus 5’s shot is softer. Moreover, Prateek’s cutout feels a lot more natural and DSLR-like compared to the OnePlus 5’s shot, which has some rough edges that still need to be sorted out; take a look at the greens next to Prateek’s right hand for proof. When we shot indoors, the portrait images were a little too grainy and therefore we suggest that you shoot all your portraits under good lighting conditions.

Lest we forget, even the colour accuracy – while muted – is tuned to perfection on the iPhone 7 Plus. Yes, Prateek’s face does look like he is perennially suffering from jaundice. In fact, the OnePlus 5’s camera does some colour correction to make his face look pinker than normal. Facial colour accuracy is obviously vital when shooting portraits and hence we’ve placed a lot of emphasis on that parameter.

All said and done, none of our observations indicate that the OnePlus 5’s portrait shots are bad. In fact, if you are going to upload this portrait picture as your display picture on Facebook, then OnePlus’ shot will actually look impressive. Also, at first glance – when not looked at it from a critic’s perspective – the end user will actually find the OnePlus 5’s portrait shot pleasing to the eye. And, from a consumer’s standpoint, maybe that is what matters at the end of the day for OnePlus.

No wide-angle lens on any iPhone so yes. 🙂 (For me, anyway. I prefer wide angle vs telephoto)


However, it is evident that OnePlus agrees with our viewpoint too. OnePlus’ implementation of the telephoto secondary lens gets a ‘great effort’ tag from us, but Apple is still the reigning king of portraits and zoomed images. Note this though, a software update on the OnePlus 5 can entirely change the outcome of this article.