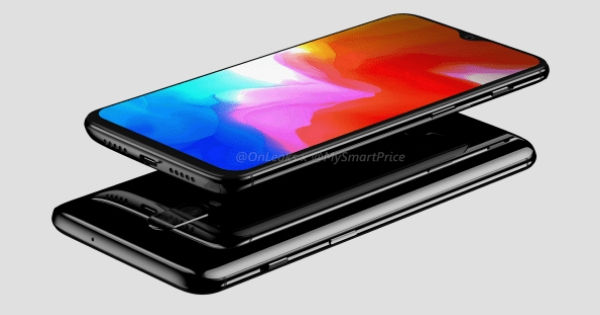 We have been seeing the CAD-based 3D renders and 360-degree videos of upcoming smartphones from the popular leakster – @OnLeaks for a while now. And now it’s the turn of the soon-to-be-launched OnePlus 6T, giving us a fair idea of how the handset is expected to look like. The images corroborate with what we have already seen in the past leaks.

The renders show the next OnePlus flagship flaunting a waterdrop notch on top of the display, which we have already seen on the likes of the OPPO R17, F9, F9 Pro (review) and Vivo V11 Pro (review). There is no trace of a fingerprint scanner in the renders as well, which suggests that the OnePlus 6T will indeed have the in-display fingerprint scanner. The images seem to be of the Mirror Black variant and can be seen featuring the same vertically-stacked camera module on the back with LED flash as the OnePlus 6 (review). The button and port placement are also identical to the predecessor, however, a critical element is missing. It seems that the OnePlus is finally letting go of the 3.5mm audio jack on the next flagship, which the brand had already confirmed. The dimensions of the smartphone are revealed to be 57.5 x 75.7 x 8.2mm and 8.6mm at its thickest point viz. the camera bump.

To recap on the rumoured specs, the OnePlus 6T is tipped to sport a 6.41-inch AMOLED display with full HD+ resolution and 19.5:9 aspect ratio. At the core, the phone will rock the same high-end Qualcomm Snapdragon 845 chipset as its predecessor. We can expect the RAM and storage variants to be the same as well — 6GB + 64GB, 8GB + 128GB and 8GB + 256GB. The 6T is also said to retain the camera hardware from the OP6 i.e. 16MP + 20MP setup on the back and a 20MP selfie shooter. The battery is also speculated to remain the same at 3,300mAh with Dash Charging support. However, in the software department, it’s likely to boot the Oxygen OS based on Android 9.0 Pie, which recently rolled out to the OnePlus 6.

According to a leak, OnePlus is expected to launch the smartphone on October 17th and a recent report revealed that the smartphone could be launched in India on the same date. However, pricing of the phone is still under the wraps with the only hint being the rumour that the T-Mobile variant of the 6T will retail for $550 (~Rs 38,400).