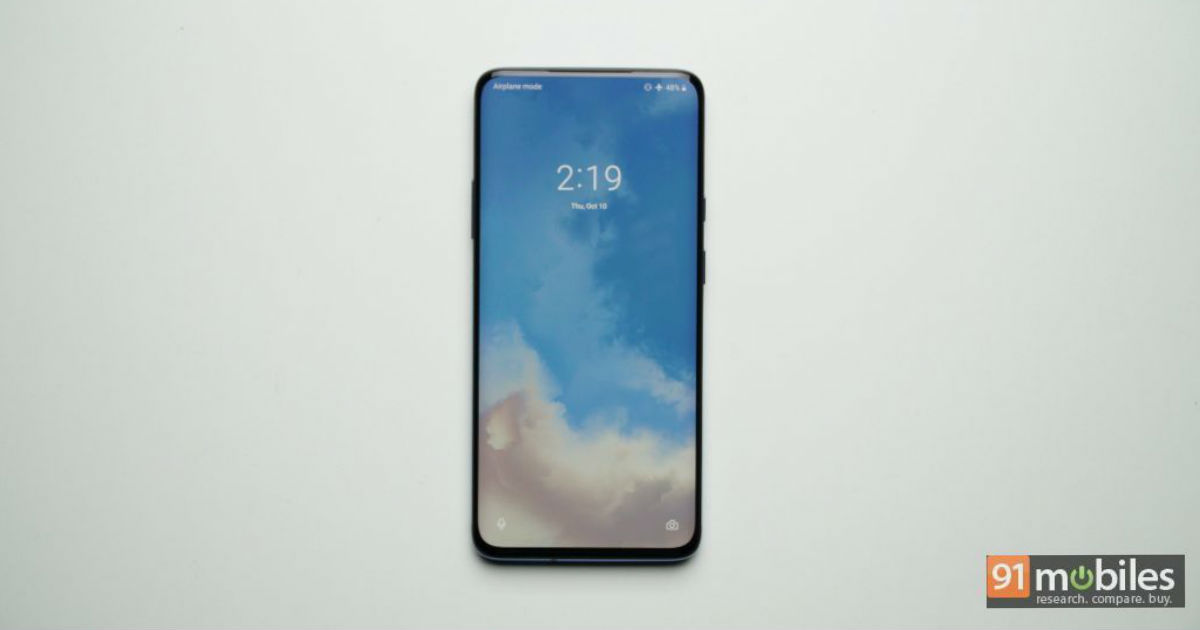 The OnePlus 7T Pro smartphone has been launched at an event in London, UK. The handset is an elder sibling of the OnePlus 7T smartphone from last month and a follow-up of 7 Pro, which was introduced earlier this year. The OnePlus 7T Pro shares most of its traits with its predecessor save for the chipset, laser autofocus, fast charging tech, and a slightly bigger battery cell. The all-new OnePlus 7T Pro has the features pop-up selfie camera design, curved Fluid AMOLED display, triple rear cameras, and the latest Qualcomm Snapdragon 855 Plus SoC ticking at its core. The phone houses 4,085mAh battery, up from a 4,000mAh cell, and is backed by Warp Charge 30T, which is said to be 23 percent faster than the previous-gen Warp Charge technology, though wireless charging is still missing.

OnePlus 7T Pro price in India is set at Rs 53,999. The handset and comes in only Haze Blue colour and 8GB + 256GB configuration. It will go on sale in India at 12pm on October 11th via exclusive OnePlus stores in eight cities. Open sales for the device start 12pm on October 12th via Amazon.in, OnePlus.in, and the OnePlus offline stores.

Launch offers for those who purchase the device on October 12th via OnePlus.in and offline stores include Rs 3,000 instant discount on HDFC Bank credit card. Amazon users will get Rs 1,750 off making the purchase via an ICICI Bank debit or credit card and Rs 1,500 off on other banks’ debit and credit cards. Buyers will also get up to Rs 3,000 off on flight tickets on Amazon Pay. Airtel customers will get double data benefits on select prepaid recharges, accessories voucher worth Rs 500 for OnePlus.in. Buyers will also get no-cost EMIs for up to 6 months on purchasing the handset from select channels.

The OnePlus 7T Pro McLaren Edition price is Rs 58,999 and it comes with 12GB RAM and 256GB storage. This smartphone will be available for pre-orders via OnePlus retail stores for an amount of Rs 5,000; those who pre-book the handset will get it on October 18th and get the Type-C Bullets earphones free. It goes on open sale on November 5th at 12pm via online and offline channels.

The OnePlus 7T Pro sports a 6.67-inch Fluid AMOLED display with no notch or bezel whatsoever. Like its predecessor, the phone’s screen has 90Hz refresh rate, HDR10+ support, QHD+ resolution (1,440 x 3,120p), in-display fingerprint scanner, 19.5:9 aspect ratio, and 3D Corning Gorilla Glass protection. The handset is powered by a Snapdragon 855 Plus mobile platform, which is said to be slightly better than the regular Snapdragon 855 SoC. This is paired with 8GB of RAM and 256GB UFS 3.0 non-expandable storage.

As far as the cameras are concerned, the OnePlus 7T has the same triple camera setup of 48-megapixel Sony IMX586 sensor with f/1.6, OIS, and EIS + 8-megapixel telephoto lens with OIS and f/2.4 aperture + 16-megapixel ultra-wide-angle lens f/2.2 aperture lens and 117-degree field-of-view. The 7T Pro has a laser focus that can latch the focus on the subject much quicker and macro mode that turns the wide-angle lens into a macro lens. The cameras are backed by 3x optical zoom, PDAF, 4K video at 30/60fps, super slow-mo, time-lapse, portrait mode, and more. The front camera of the phone employs 16-megapixel Sony IMX471 sensor on the front for selfie and video calling. Other features include face unlock, dual stereo speakers with Dolby Atmos, haptic vibration, face unlock, and standard connectivity options.