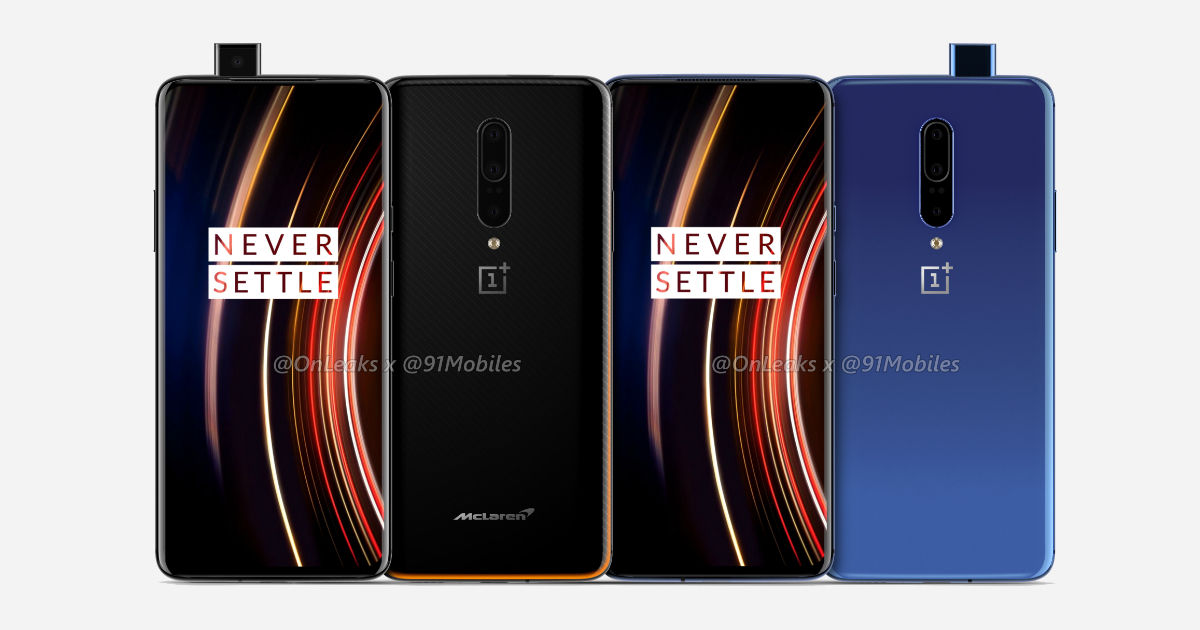 According to the renders, the OnePlus 7T Pro, as well as the McLaren Edition, will look exactly the same as its predecessor, the 7 Pro. OnLeaks believes there are no external differences to be seen between current flagship and its successor, which may launch on September 26th in India and hit the market on October 15th. However, it will come in a new Haze Blue colour option, which can be seen in the renders.

Both OnePlus 7T Pro and OnePlus 7T Pro McLaren Edition feature a curved edge-to-edge screen with pop-up selfie camera. Since the design – including the dimensions – will remain unchanged, we can expect the display to be 6.67-inch in size. The handsets will most likely pack the same Fluid AMOLED panel with 90Hz refresh rate and in-display fingerprint scanner as the OnePlus 7 Pro.

The back panel of the OnePlus 7T Pro will look the same its predecessor’s too, the renders show. On the other hand, we can see some differences on the rear design of the OnePlus 7T Pro McLaren Edition compared to that of the 2018 model. The handset seems to have a textured pattern on the whole back panel; on last year’s McLaren Edition handset, it was restricted to just the middle of the back. Orange accents that start from the middle of both sides and cover the bottom.

Apart from this, the OnePlus 7T Pro duo sticks to the vertically-aligned triple rear cameras at the centre instead of going for a circular camera module, which is expected on OnePlus 7T. The power button and alert slider are on the right spine of the phone whereas the volume rocker seem to be on the left edge. The USB Type-C charging port, which doubles up as the audio jack, is at the bottom edge of the OnePlus 7T Pro and 7T McLaren Edition along with speaker grill and antenna.