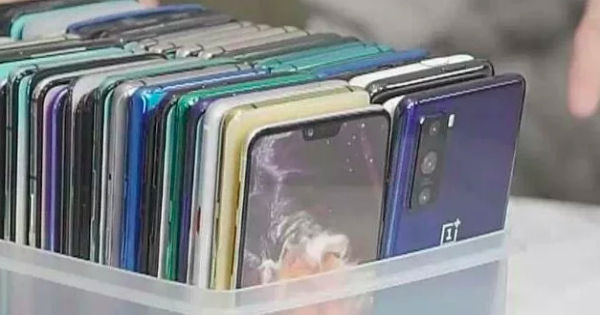 A little while ago, 91mobiles brought you exclusive OnePlus 8 Lite renders, which suggested that the mid-range phone was in development. The renders revealed a phone with a centered punch-hole display and a rectangular camera module on the back with dual cameras and an LED flash. Now, an alleged OnePlus 8 Lite live image has surfaced online, which shows us the rear panel of the phone that is more or less in line with the render. The image shows a bunch of OnePlus phones stacked in a box, with what looks to be a OnePlus 8 Lite prototype. We see the vertical camera setup of the OnePlus 8 Lite, but with triple cameras instead of dual sensors as previously reported. We also see no fingerprint sensor on the back, further suggesting the OnePlus 8 Lite will come with an in-display fingerprint sensor.

Apart from the live image, there are no new details about the OnePlus 8 Lite. Based on our previous report, the OnePlus 8 Lite specifications could include a 6.4-inch or 6.5-inch flat OLED display with a center-alinged punch-hole cutout, Type-C port and measuring 159.2 x 74 x 8.6mm. OnePlus 8 Lite could come with last year’s Snapdragon 855 or 855 Plus SoC without 5G, while the more powerful OnePlus 8 and OnePlus 8 Pro would get the latest Snapdragon 865 SoC with 5G connectivity.

That’s all the information we so far know about the OnePlus 8 Lite at the moment. We expect OnePlus to announce the OnePlus 8, OnePlus 8 Pro, and the OnePlus 8 Lite in the first half of 2020. Separately, OnePlus was present at CES 2020 this week to show off the OnePlus Concept One smartphone with a disappearing triple camera setup thanks to a colour-shifting glass technology.

OnePlus 8 gets BIS certification in India, expected to launch in Q2 2020

OnePlus 8 lineup will be the ‘most beautiful flagship series’: CEO Pete Lau