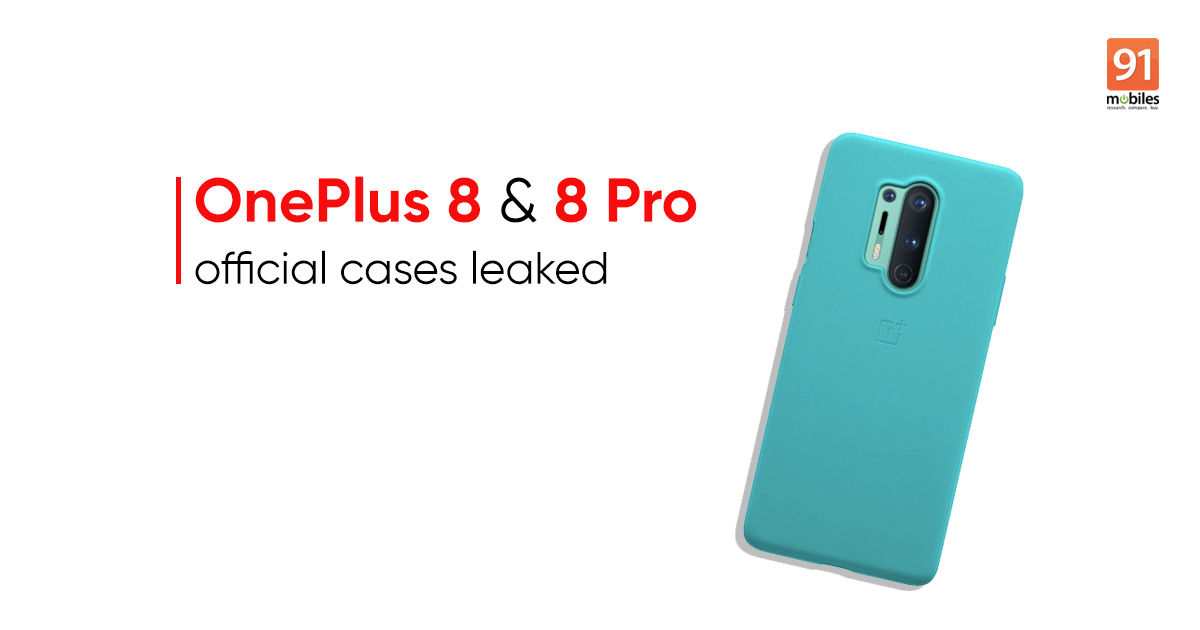 The highly-anticipated OnePlus 8 series is all set to launch on April 14th in India. While all eyes will be on the flagships, OnePlus will also be introducing a handful of accessories including OnePlus 8 and OnePlus 8 Pro cases. Popular Indian tipster Ishan Agarwal has shared high-def images of the cases, which will most likely be sold alongside the handsets in the country. Options include the signature OnePlus Sandstone in Black, new Smoky Purple, and Cyan. Additionally, Nylon, Karbon and simple transparent bumper OnePlus 8 and OnePlus 8 Pro cases are also said to be available. As has been the case before, these cases will not be bundled with OnePlus 8 series, instead, you will have to purchase them separately via OnePlus website and partnered retail stores such as Amazon.in.

The OnePlus 8 and OnePlus 8 Pro, as confirmed by the case renders as well, will most likely debut with a punch-hole display. While the regular OnePlus 8 model is said to come with triple rear cameras, the ‘Pro’ variant will debut with a quad-camera setup. In case you don’t know it yet, both handsets will be powered by Qualcomm Snapdragon 865 SoC and sport high refresh rate display. The chipset is expected to be paired with 8GB/ 12GB of RAM and 128GB/ 256GB storage options. Software-wise, the handsets are tipped to run a new OxygenOS version with dark mode support for more apps atop Android 10 OS out of the box.

The OnePlus 8 will reportedly ship with a 6.55-inch Full-HD+ 90Hz Fluid AMOLED display with 20:9, a pixel density of 402ppi, and an in-display fingerprint scanner. The phone’s triple rear cameras are expected to feature Sony’s IMX586 48MP primary sensor, 16MP 16MP ultrawide sensor, and 2MP macro sensor with PDAF and dual-LED flash. For selfies, it would sport a 16MP Sony IMX471 sensor with f/2.0, fixed focus, and EIS on the front. The entire setup will be driven by a 4,300mAh battery with 30W Warp Charge 30T wired fast charging support.

As for the OnePlus 8 Pro, the handset could debut with a slightly bigger 6.78/ 6.79-inch Fluid AMOLED punch-hole display with QHD+ resolution, 120Hz refresh rate, and an in-display fingerprint scanner for security. The phone will allegedly feature quad rear cameras with 48MP Sony IMX689 main sensor, a 48MP Sony IMX586 ultra-wide-angle lens, an 8MP telephoto lens, and a 5MP colour filter with PDAF, Laser AF, and dual-LED flash. The phone’s front camera is said to come with the same 16MP selfie shooter as its younger sibling OnePlus 8. The OnePlus 8 Pro is tipped to be fuelled by a 4,510mAh battery with 30W Warp Charge 30T wired fast charging, 30W Wireless Charging, and 3W Reverse Wireless Charging support.

Additionally, OnePlus is also prepping to launch new OnePlus Bullets Wireless earbuds and Warp 30W wireless charger at the event. So stick around.