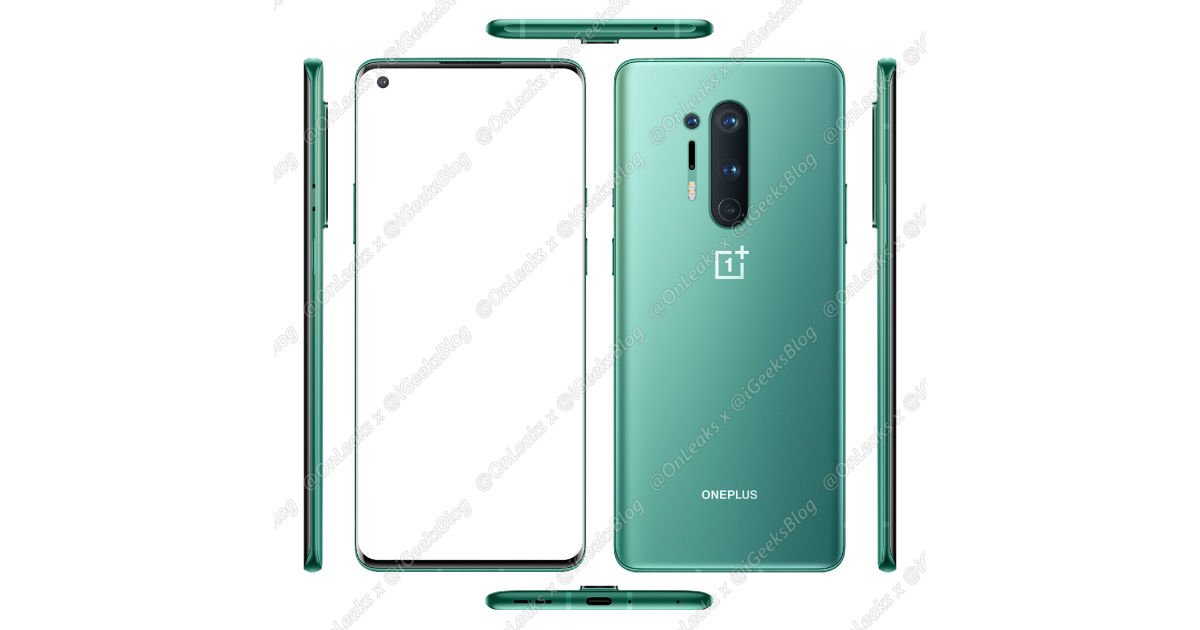 OnePlus 8 and OnePlus 8 Pro are easily among the most anticipated flagship phones expected to launch in 2020. The OnePlus 8 series is reported to launch on April 15th, and there have been plenty of reports in the past, including renders provided by 91mobiles late last year and other leaked live images Now, a new official-looking render of the OnePlus 8 Pro has surfaced online, courtesy of OnLeaks aka Steve H McFly and iGeeksblog. The image shows the phone in a shiny new green colour and the design almost matches with exclusive renders published by 91mobiles a while ago. In addition to the render, a separate leak by tipster Ishan Agarwal has revealed complete OnePlus 8 and OnePlus 8 Pro specifications. It seems the Pro model will be the company’s first to offer wireless charging support and proper IP68 water resistance.

The OnePlus 8 Pro press-image confirms it’ll have quad-cameras at the back — three of which are arranged vertically, while the fourth sensor is placed parallelly along with dual-LED flash and what looks like laser autofocus. The volume rocker is on the left and the power button and alert slider are on the right spine. Up top, there is the secondary microphone for noise cancellation and antenna lines. The USB Type-C port, speaker grills and primary mic are at the bottom. The OnePlus 8 Pro has a punch-hole cutout at the top left corner to house the selfie camera. The display doesn’t seem to have a curved edge like its predecessor but will have a 2.5D curved glass instead. The OnePlus 8 Pro has extremely narrow bezels and possibly an in-display fingerprint sensor for security.

Separately, noted tipster Ishan Agarwal in an exclusive leak has published the complete spec sheet of the OnePlus 8 and OnePlus 8 Pro phones, leaving nothing to the imagination. As expected, OnePlus, for the very first time could introduce wireless/reverse charging feature and a proper IP68 water-resistance on the high-end OnePlus 8 Pro model.

Talking about specifications, the OnePlus 8 Pro is said to ship with a 6.78-inch Quad HD+ Super AMOLED display with 120Hz refresh rate. As expected, it’ll be powered by the Qualcomm Snapdragon 865 SoC coupled with 5G connectivity, either 8GB/12GB LPDDR5 RAM and 128GB/256GB UFS 3.0 internal storage. The phone will have an IP68 rating for water and dust resistance. As for the optics, the OnePlus 8 Pro is expected to have quad cameras at the back consisting of a couple of 48MP sensors, an 8MP snapper and a 5MP sensor. On the front, it is tipped to ship with a 16MP snapper for selfies and video chats. A 4,510 mAh battery with 30W Super Warp 30T fast charging support, 30W wireless charging and 3W reverse wireless charging.

Similarly, the OnePlus 8 is said to come with a slightly smaller 6.55-inch full HD+ Super AMOLED display and 90Hz refresh rate. It is tipped to pack 8GB/12GB LPDDR4X RAM and 128GB/256GB UFS 3.0 storage. In terms of optics, the OnePlus 8 is said to come with triple rear cameras consisting of a 48MP primary sensor, a 16MP secondary unit and a 2MP unit. There will be a 16MP unit on the front. It is said to be equipped with a 4,300mAh battery with 30W Warp Charge 30T fast-charging support and no wireless charging support.