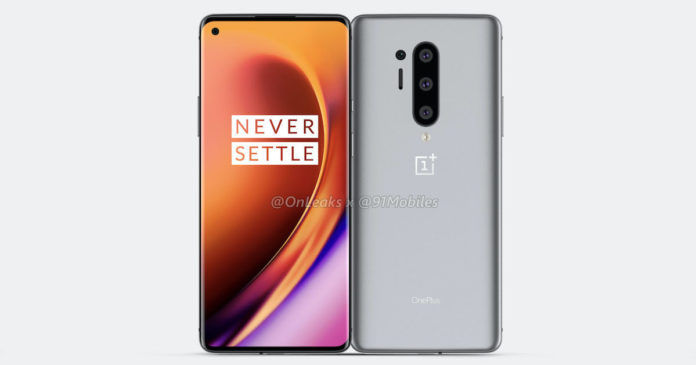 Over the past several months, we have seen the OnePlus 8 Pro through our exclusive renders, in the hands of Iron Man star and OnePlus brand ambassador Robert Downey Jr., as well as occasional unverified renders. Now, the some alleged OnePlus 8 Pro live images have surfaced, giving us yet another look at the phone’s design. The images once again show off the corner punch-hole cutout on a curved display and a vertical camera setup on the back, which we have seen several times previously as well. While the OnePlus 7T Pro features a vertical triple camera setup, the upcoming OnePlus 8 Pro will offer a quad camera setup wherein there will be three cameras stacked together and a separate fourth sensor next to the main module that could be a ToF camera or a macro lens.

This week, tipster Ishan Agarwal revealed the full OnePlus 8 Pro specifications. The phone is said to come with a 6.78-inch AMOLED display with QHD+ resolution and 120Hz refresh rate. The smartphone will be powered by the Snapdragon 865 5G SoC paired with 8GB and 12GB RAM and up to 256GB internal storage. It will house a 4,510mAh battery and support 30W Warp Charge 30T fast wired charging as well as 30W wireless charging. Additionally, the handset will support 3W reverse wireless charging.

The quad camera setup on the OnePlus 8 Pro is tipped to include two 48MP sensors along with an 8MP and a 5MP camera. The punch-hole display up front will house a 16MP selfie snapper. Since there is no pop-up mechanism, the phone will come with IP68 rating this time around.

The OnePlus 8 Pro is speculated to launch on April 15th. This, however, is largely expected to be incorrect considering the ongoing lockdowns in several parts of the world to curb the spread of the coronavirus. The company will likely launch the OnePlus 8 series towards the end of the month or early May.