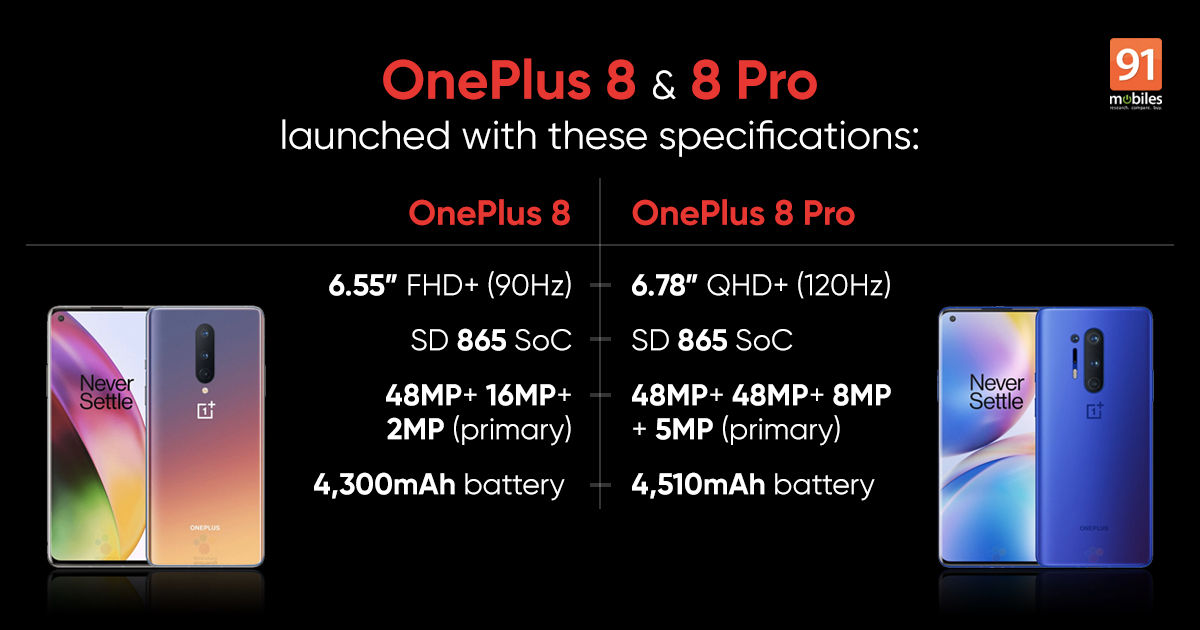 OnePlus 8 and OnePlus 8 Pro has been launched as OnePlus’ latest flagship offerings. Both OnePlus 8 and OnePlus 8 Pro rock Qualcomm Snapdragon 865 SoC and come with 5G connectivity. In India, the phones will only offer 4G connectivity due to the lack of 5G infrastructure in the country. The handsets flaunt glass backs, punch-hole displays, and vertically-aligned rear camera setups. While the OnePlus 8 packs triple rear cameras, the Pro model has as many as four cameras on the back panel. Furthermore, the OnePlus 8 Pro becomes the first smartphone from the brand to come with 120Hz display, IP68 water- and dust-resistance rating, and wireless charging support. The vanilla OnePlus 8, on the other hand, lacks wireless charging support and features 90Hz display, the same as the last two generations of OnePlus smartphones.

OnePlus has also announced 30W Warp Charge wireless charger that can juice up the compatible devices such as OnePlus 8 Pro from nothing to 50 percent in 30 minutes. The OnePlus Wireless 30W Charger price has been set at $69.95 (~Rs 5,321) and $79.95 (~Rs 6,082) for the pad and stand versions, respectively. The charging dock features a built-in fan at the rear-side to dissipate heat and avoid overheating and ‘Sleep Mode’ feature to turn off the cooling fan at night.

Starting with the OnePlus 8 Pro specifications, the handset ships with a 6.78-inch QHD+ Fluid AMOLED display that bears 1,440 x 3,168 pixels resolution, punch-hole design, 19.8:9 aspect ratio, HDR Boost, and 3D Gorilla Glass protection. The phone is powered by the Qualcomm Snapdragon 865 SoC, which is the most powerful chipset for Android phones at the moment. There is Snapdragon X50 chipset onboard as well for 5G connectivity. The SoC is paired with Adreno 650 GPU, up to 12GB LPDDR5 RAM, and 256GB UFS 3.0 storage. The OnePlus 8 Pro also comes with MEMC technology that boosts the frame rate of a standard video from 24fps to up to 120fps for a smooth and less blurry experience. The tech is considered ideal for sports and action-packed content.

In the imaging department, the OnePlus 8 Pro rocks a quad-rear camera setup, featuring a 48MP Sony IMX689 primary sensor with f/1.78, OIS, and EIS, an 8MP telephoto lens with OIS, 3X hybrid zoom, and f/2.44, a 48MP ultra-wide-angle sensor with 119.7-degree field-of-view and f/2.2 aperture, and a 5MP f/2.4 colour filter sensor. The front camera of the phone gets a 16MP Sony IMX471 shooter with EIS and f/2.45 aperture for selfies and video calling. The cameras are backed by a slew of modes, such as HDR, Nightscape, Super Macro, Portrait Pro, AI Scene Detection, and up to 4K video recording.

The OnePlus 8 Pro also comes with MEMC technology that boosts the frame rate of a standard video from 24fps to up to 120fps for a smooth and less blurry experience. The tech is considered ideal for sports and action-packed content.

Software-wise, the OnePlus 8 Pro runs OxygenOS atop Android 10 out of the box with Dark Theme 2.0, which is compatible with even more apps than the original version. The handset is driven by 4,510mAh battery with Warp Charge 30T wired and Warp Charge 30 wireless charging support that is rated to add 50 percent juice in just 30 minutes. For security, there is an in-display fingerprint scanner. Connectivity options include 5G, 4G LTE, dual SIM slots, Wi-Fi 6, Bluetooth 5.1, NFC, GPS + GLONASS, and USB Type-C charging port that doubles up as a headphone jack. The OnePlus 8 Pro measures 165.3 x 74.35 x 8.5mm and weighs 199 grams. The handset comes with IP68 water- and dust-resistance rating, which means that it can survive underwater up to 1.5m for 30 minutes.

The regular OnePlus 8 smartphone also runs Android 10-based OxygenOS with Dark Theme 2.0 out of the box. The handset has a slightly smaller form factor with 6.55-inch Fluid AMOLED punch-hole display compared to the ‘Pro’ model. The display is backed by 90Hz refresh rate instead of 120Hz, Full-HD+ resolution, 20:9 aspect ratio, and 3D Corning Gorilla Glass. The phone is powered by Snapdragon 865 5G SoC with 8GB/ 12GB LPDDR4X RAM and 128GB/ 256GB UFS 3.0 storage.

The OnePlus 8 rocks triple-rear camera setup, which comprises a 48MP Sony IMX586 primary sensor with OIS, EIS, and f/1.75 lens, a 2MP macro sensor with f/2.4 lens, and a 16MP ultra-wide sensor with f/2.2 lens and 116-degree field-of-view. For selfies, the handset features a 16MP Sony IMX471 shooter with f/2.45 lens and EIS. The cameras come with features to that of the OnePlus 8 Pro. A 4,300mAh battery with 30T Warp Charge (wired) support keeps the handset up and running. There is an in-display fingerprint scanner for security.