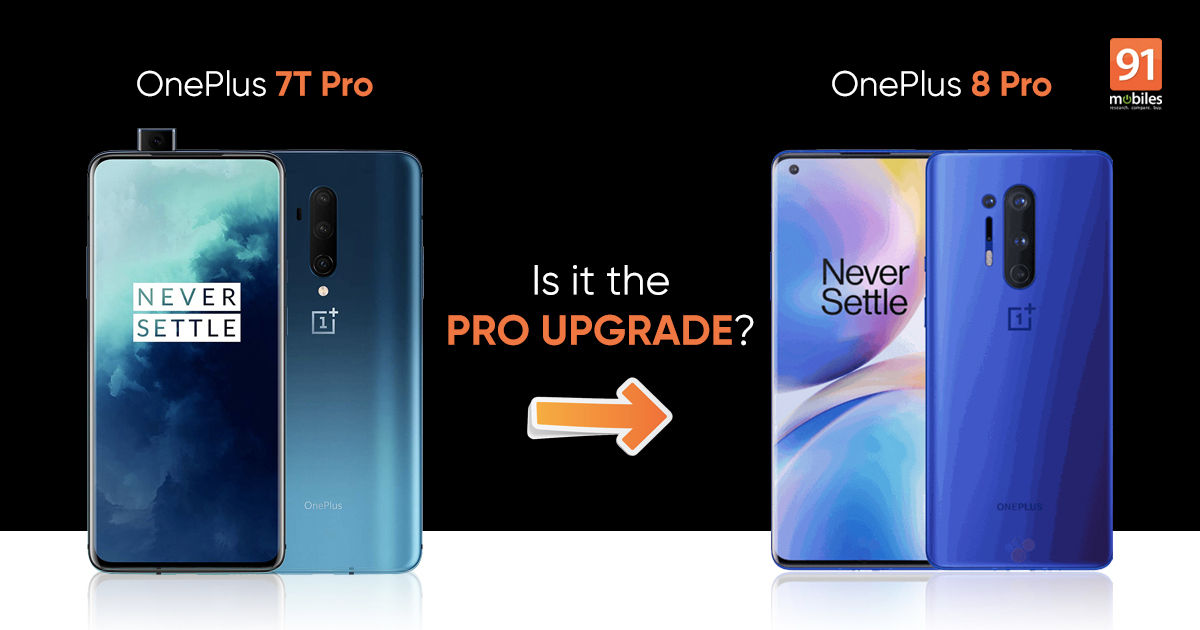 The ‘ultra-flagship’ OnePlus 8 Pro smartphone is the most loaded OnePlus offering yet. The handset is the first smartphone from the brand to come with wireless charging support. It also touts 120Hz screen refresh rate, a beefy battery, quad rear cameras, and the flagship Qualcomm Snapdragon 865 SoC under the hood. The OnePlus 8 Pro has been launched alongside the vanilla OnePlus 8, which is an iterative upgrade to last year’s OnePlus 7T smartphone (read our comparison to find out more). Here we will be comparing the OnePlus 8 Pro with its predecessor OnePlus 7T Pro:

Unlike last year where the ‘Pro’ OnePlus variants had pop-up selfie cameras, OnePlus has utilised the punch-hole display design for both vanilla as well as Pro models this time. The OnePlus 8 Pro, much like OnePlus 8, sports a punch-hole display with a cut out in the top left corner for the selfie camera. The display is 6.78-inch tall and comes with QHD+ resolution, 19.8:9 aspect ratio, and a refresh rate of 120Hz. The display is also backed by MEMC technology, which promises to enhance sports and action-packed content. The technology boosts frame rates of a standard video from 24fps (frames per second) to up to 120 fps for a smoother experience.

The OnePlus 8 Pro’s back panel features a glass layer and quad rear cameras. The volume rocker is on the left edge of the phone, whereas the volume rocker and power button are on the right. The bottom edge of the OnePlus 8 Pro houses the speaker grille and USB Type-C port for charging as well as audio. The OnePlus 8 Pro is IP68 water- and dust-resistance as well, which means it can survive underwater up to 1.5 meters and 30 minutes. Worth mentioning that OnePlus loyalists have been demanding the waterproofing feature for a while now, and finally, the brand has relented. The OnePlus 8 Pro is the first smartphone from the company to feature an IP rating.

The OnePlus 7T Pro, meanwhile, comes with a pop-up selfie camera design. The fascia sports a 6.67-inch QHD+ display with 90Hz refresh rate and HDR10+ support, while the rear of the phone features triple rear cameras. The handset’s physical buttons and ports alignment remains the same as the OnePlus 8 Pro.

As for the performance, the OnePlus 8 Pro houses Qualcomm’s Snapdragon 865 SoC paired with Adreno 650 GPU, up to 12GB of RAM and 256GB storage under the hood. The chipset is 25 percent more powerful and power-efficient than last year’s flagship Snapdragon 855+ SoC. The handset also comes with Snapdragon X50 chipset for 5G connectivity.

The OnePlus 7T Pro, as you might know already, rocks Qualcomm Snapdragon 855+ chipset paired with 8GB of RAM and 256GB storage. The handset lacks 5G connectivity. Software-wise, both phones run Android 10-based OxygenOS out of the box – but OnePlus 8 Pro comes with Dark Theme 2.0, which the OnePlus 7T Pro is likely to get via OTA software update.

The OnePlus 8 features a quad-camera setup at the rear, comprising a f/1.78 48MP Sony IMX689 primary sensor with OIS and EIS, an 8MP telephoto lens with OIS, 3X hybrid zoom, and f/2.44 lens, a 48MP ultra-wide sensor with 119.7-degree field-of-view and f/2.2 lens, and finally, a 5MP colour filter sensor with f/2.4 lens. The front camera of the phone gets a 16MP Sony IMX471 sensor with EIS and f/2.45 for selfies and video calling. The cameras are backed by a slew features, including HDR modes, Nightscape, Super macro, Portrait Pro mode, AI scene detection, and up to 4K video recording support.

OnePlus 7T Pro camera specifications include a 48MP Sony IMX586 triple rear camera with an f/1.6 lens and OIS as well as EIS support. This is paired with an 8MP sensor with an f/2.4 telephoto lens and OIS support, and a 16MP sensor with an f/2.2 ultra-wide-angle lens that offers a field of view (FoV) of 117 degrees. Furthermore, there are features such as UltraShot, Nightscape, Portrait, Pro Mode, Panorama, HDR, AI Scene Detection, and RAW Image. The front camera comes with a 16MP Sony IMX471 sensor with a pixel size of one micron and includes an f/2.0 lens for selfies and video calling.

The OnePlus 8 Pro is fuelled by a 4,510mAh battery with 30T Warp fast wired charging. In fact, marking the very first time for a OnePlus phone, the 8 Pro also features 30W Warp Charge wireless charging, which is said to charge the device from 0 to 50 percent in just half an hour. The handset comes with an in-display fingerprint scanner and connectivity options such as 5G, 4G VoLTE, Wi-Fi 6, Bluetooth v5.1, GPS/ A-GPS, NFC, and USB Type-C.

The OnePlus 7T Pro is driven by 4,085mAh battery with 30T Warp charge support. There is no wireless charging feature, but you get in-display fingerprint scanner for security. In terms of connectivity, the handset is equipped with 4G VoLTE, Wi-Fi 802.11ac, Bluetooth v5.0, GPS/ A-GPS, NFC, and USB Type-C.

As for the OnePlus 7T Pro price, it’s currently selling at Rs 53,999 for the lone 8GB RAM and 256GB storage option. The handset is available for sale in Haze Blue colour hue on Amazon.in, OnePlus official website, and other major retail stores.