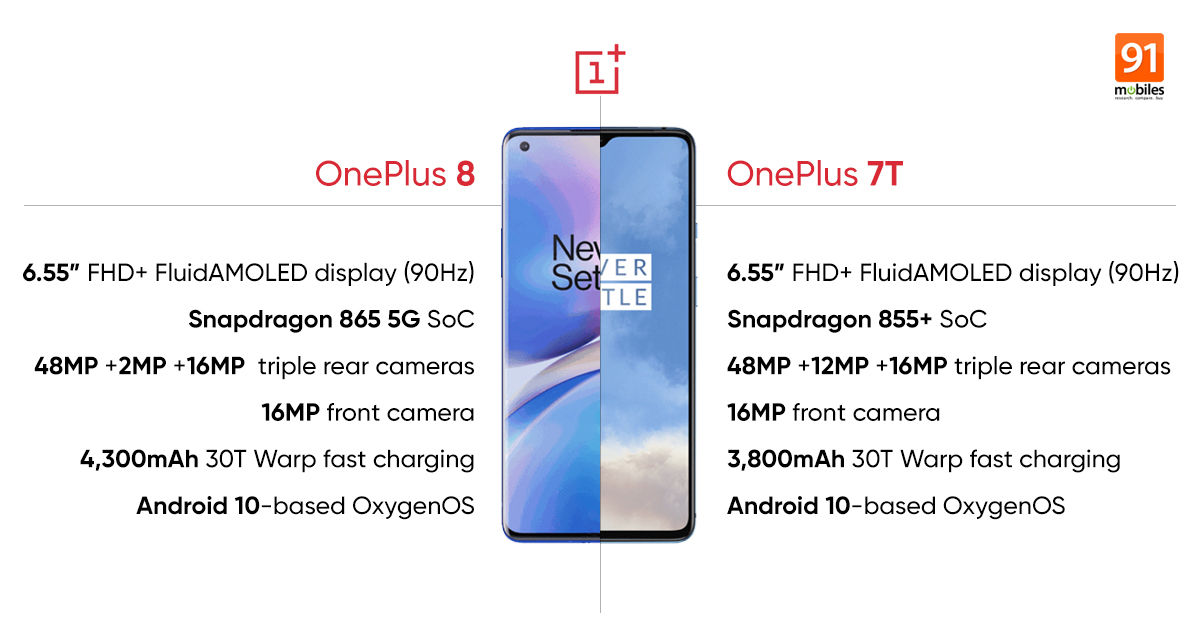 The OnePlus 8 has just been launched as the brand’s next-gen affordable flagship offering. The handset touts new age punch-hole display design and powerful hardware, including 5G Snapdragon 865 SoC and a 4,300mAh battery. However, a question that may be swirling in the minds of users is how different is OnePlus 8 from its predecessor, the OnePlus 7T? Well, we’re here to answer just that. So without any further ado, let’s begin the OnePlus 8 and OnePlus 7T price in India and specifications comparison.

On the design front, the OnePlus 8 is a tad different from its predecessor. The new handset comes with a punch-hole display and vertically-aligned triple rear cameras. The OnePlus 7T, on the other hand, has triple cameras arranged horizontally in a circular module on the back panel, and a waterdrop notch for the selfie camera atop the display. Apart from this and colour options, many design aspects on the handsets are similar.

Both OnePlus 8 and OnePlus 7T ship with glass-sandwich designs and 6.55-inch Fluid AMOLED Full HD+ displays with 90Hz refresh rate. The phones have a power button and alert slider on the right spine and volume buttons on the left. The bottom edge of the handsets features the speaker grill and USB Type-C charging ports that doubles up as a headphone jack.

The OnePlus 8 smartphone rocks the latest Snapdragon 865 SoC, which is said to be 25 percent faster and more power efficient than last year’s Snapdragon 855+ chipset. The chipset is paired with 8GB/ 12GB RAM and 128GB/ 256GB storage. Software-wise, the handset runs Android 10-based OxygenOS out of the box with the new Dark Theme 2.0 support that is compatible with even more apps now.

The OnePlus 7T, meanwhile, is powered by Qualcomm Snapdragon 855+ SoC coupled with 8GB RAM and 128GB/ 256GB storage onboard. While the handset will not be as fast as OnePlus 8, it’ll be capable enough to handle pretty much anything thrown at it with no lags and stutter whatsoever. The OnePlus 7T also comes pre-loaded with OxygenOS atop Android 10 out of the box. There is no Dark Theme 2.0 on the handset at the moment, but it’s likely to get OTA software update soon.

For selfies and video calling, both phones rely on 16MP shooters with EIS, Time Lapse, and Full HD video recording support at 30fps on the front. The OnePlus 8, however, will capture more light, and hence, details, thanks to the slightly bigger f/2.45 lens compared to f/2.0 lens on the OnePlus 7T.

For security, both phones have in-display fingerprint scanners.