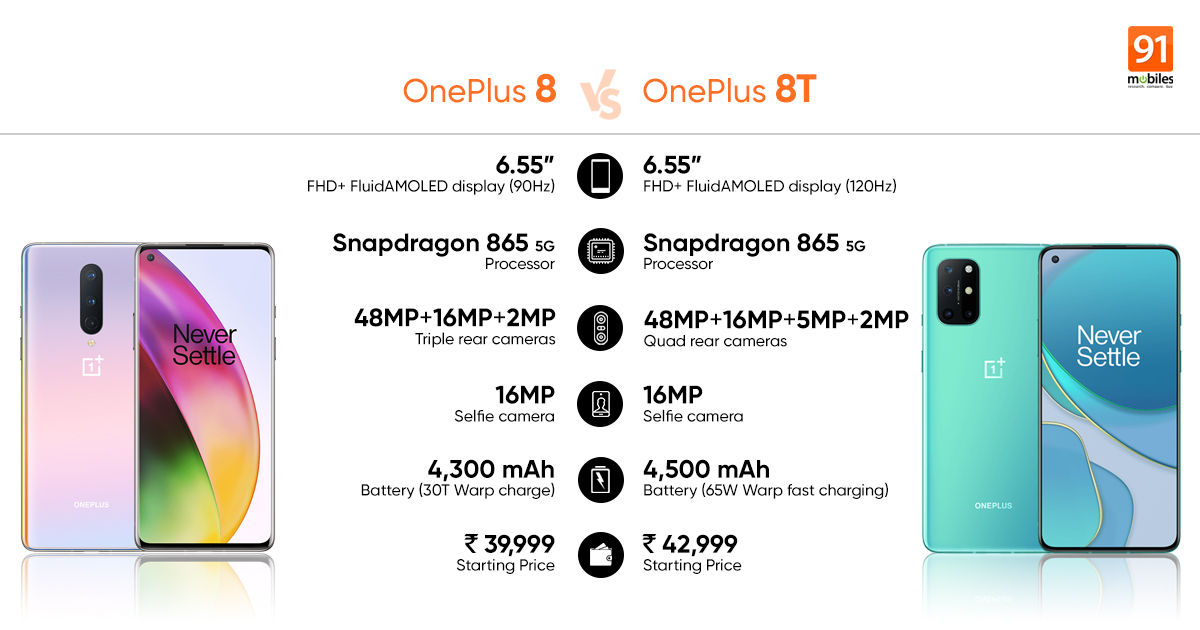 OnePlus 8T (review) price in India and specifications are now out in the open and the flagship is on open sale on OnePlus.in and Amazon. The newest premium OnePlus device comes with a host of upgrades compared to its predecessor, the OnePlus 8, especially in terms of display and fast charging support. Key OnePlus 8T specs include a 120Hz refresh rate screen, quad rear cameras, 4,500mAh battery, and fast 65W Warp Charge solution, among other things. That said, the OnePlus 8 (review) price in India is now down to Rs 39,999 during the Diwali sales on Amazon and OnePlus.in. It is unclear whether the price cut is temporary or permanent as of now, but the new pricing does make it a compelling buy still. Here’s a quick comparison between the two phones to tell you what’s new and different with the OnePlus 8T.

The OnePlus 8T and OnePlus 8 ship with a punch-hole display, which is 6.55-inch tall and bears an FHD+ (1,080 x 2,400p) resolution, in-display fingerprint scanner, Corning Gorilla Glass 5, and 20:9 aspect ratio. The handsets are powered by Snapdragon 865 SoC under the hood coupled with up to 12GB RAM and 256GB storage onboard, which is non-expandable. 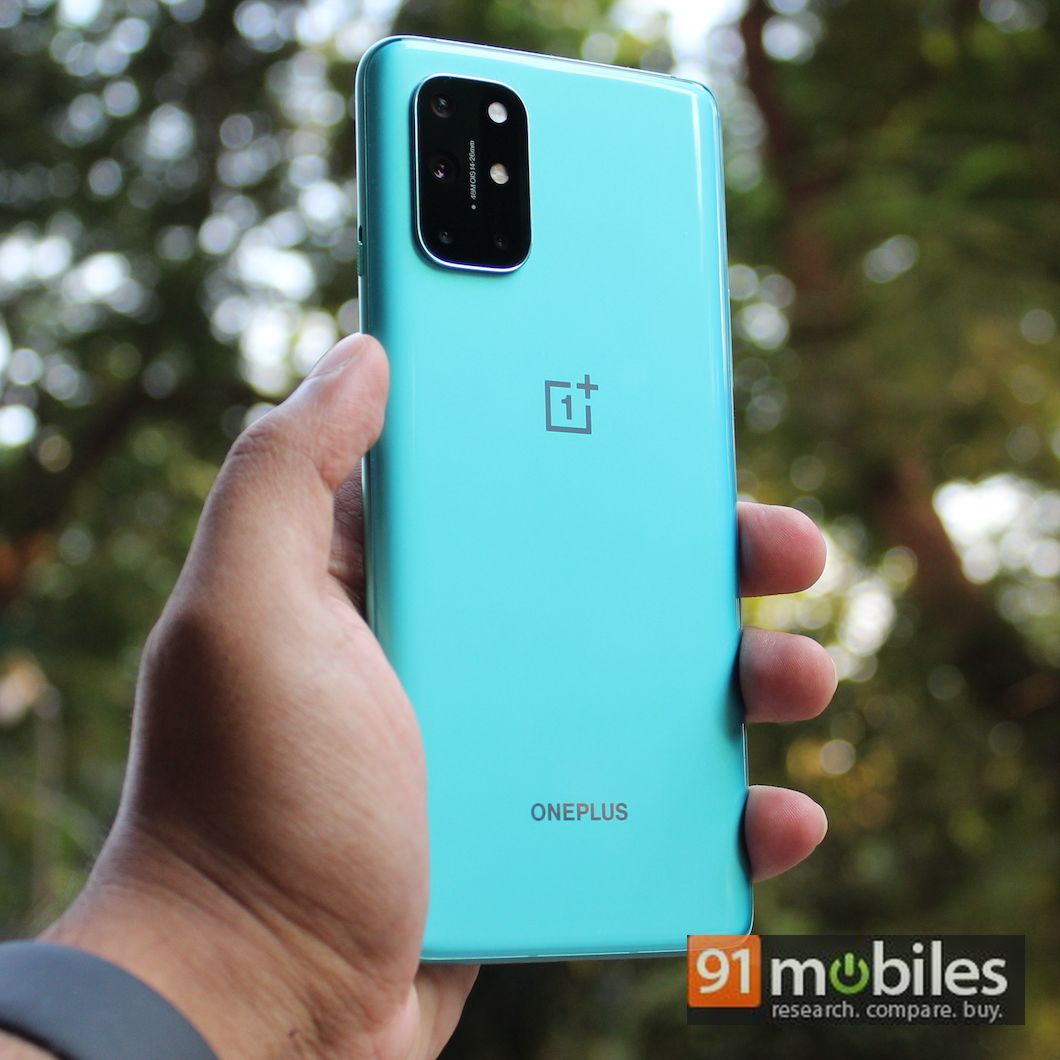 Both phones run Android 11-based OxygenOS (OnePlus 8 gets the software via OTA update). Connectivity options include 5G, 4G LTE, Wi-Fi 6, Bluetooth v5.1, GPS/ A-GPS, NFC, and a USB Type-C port. The handsets also pack Stereo Speakers with Dolby Atmos support and a haptic vibration motor. In optics, OnePlus 8 and 8T also have similarities. They both tout the same sensors, features, and 16MP snapper on the front for selfies and video calling. Both smartphones lack IP rating and wireless charging support.

As for the differences, the OnePlus 8T gets a flat screen at the front as opposed to the curved glass on the OnePlus 8. It also ships with quad cameras comprising a 48MP primary sensor, 16MP 123-degree ultra-wide lens, 5MP mono lens, and 2MP macro lens in a squarish camera module at the back. The OnePlus 8, in contrast, has triple rear cameras minus the monochrome lens vertically-aligned near the centre. 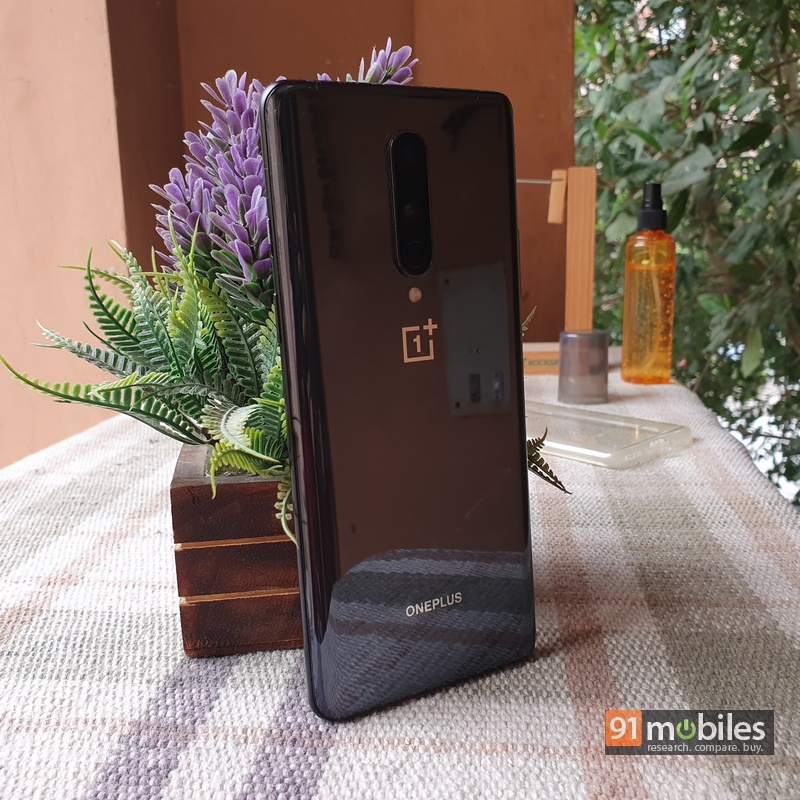 The OnePlus 8T also features a 120Hz refresh rate screen as opposed to the 90Hz screen on the OnePlus. The 8T gets a slightly bigger 4,500mAh battery as well compared to the 4,300mAh battery on the predecessor. The biggest upgrade, however, comes by way of the all-new Warp Charge 65 technology. The OnePlus 8T supports 65W fast charging which can fill the battery from zero to 100 percent in just 39 minutes. The regular OnePlus 8 supports a slower 30W fast charging solution.

OnePlus 8T price in India is set at Rs 42,999 for the base 8GB RAM + 128GB storage variant, while the top-end 12GB RAM + 256GB option costs Rs 45,999. The handset comes in Aquamarine Green and Lunar Silver colour options. The phone is on open sale on Amazon India and OnePlus.in.

The OnePlus 8T isn’t just cheaper, it could actually be better than the OnePlus 9R