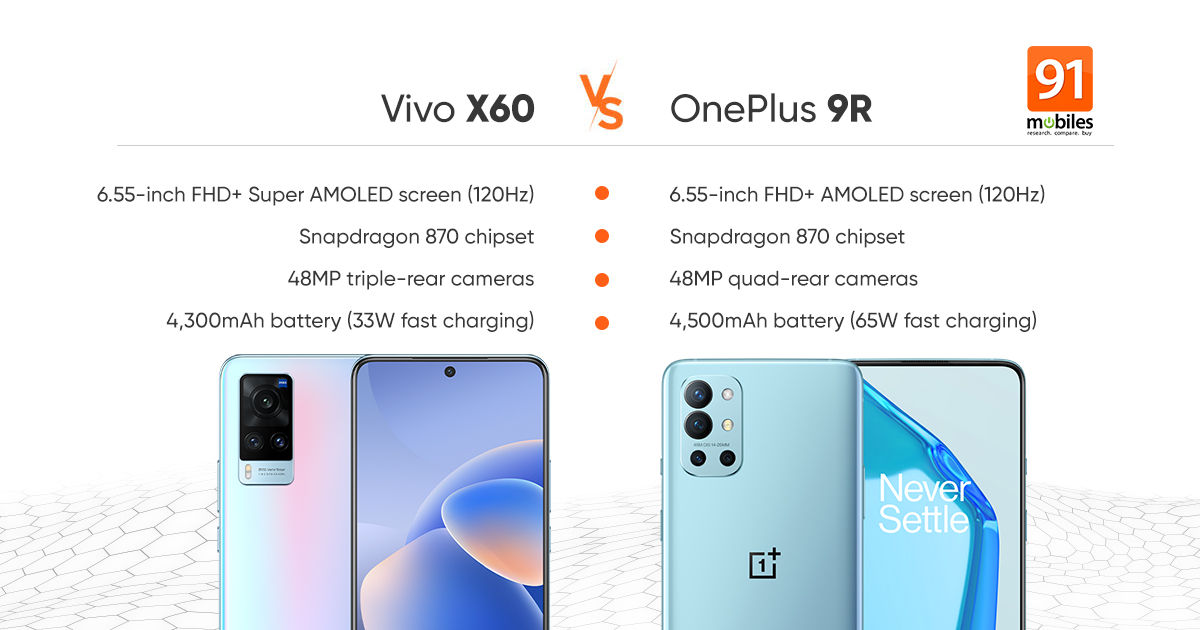 With the OnePlus 9R price in India and specifications finally revealed to us during the India launch event, it’s time to see just where it sits compared to its competition. We took a look at how the OnePlus 9 fares against the Realme GT and determined that the OnePlus flagship offered better features, whereas the Realme GT was a better value for your money. Now, let’s take a look at how the OnePlus 9R fares against the Vivo X60, which is due to be launched in India on March 25th. Both phones come with fairly identical specifications, including the chipset.

Both the OnePlus 9R and Vivo X60 are powered by a Qualcomm Snapdragon 870 chipset. However, the OnePlus 9R gives you more options in terms of memory and storage configurations, with the base variant offering 8GB of RAM and 128GB of storage. That can be upped to 12GB and 256GB if needed. The Vivo X60, on the other hand, only offers 8GB of RAM with 128GB or 256GB of storage, as per leaks. Neither device ships with a micro-SD card slot.

Moving on to the battery, the OnePlus 9R’s 4,500mAh unit supports fast charging at 65W. This is significantly better than the Vivo X60’s 4,300mAh unit that maxes out at 33W. Everything else is pretty much identical across the board, with both smartphones offering 5G, Wi-Fi 6, Bluetooth 5.1, NFC, and an under-display fingerprint scanner.

While the display specs of the OnePlus 9R and Vivo X60 are the same – a 6.5-inch FHD+ AMOLED screen with a 120Hz refresh rate – the Vivo X60’s panel is HDR10+ certified, allowing it to deliver better visuals compared to the OnePlus 9R. Both phones are covered by a layer of Corning Gorilla Glass on either side. Despite using a glass body, neither device supports wireless charging.

The OnePlus 9 series may have gotten a much-needed shot in the arm with its Hasselblad partnership. However, none of that has trickled down to the OnePlus 9R, which for all practical purposes, still runs last year’s hardware. Its rear camera array consists of a 48MP primary sensor, 16MP ultra-wide-angle lens, 5MP macro lens, and 2MP monochrome sensor. This is quite underwhelming to the Vivo X60’s 48MP primary sensor, 13MP portrait lens, and 13MP ultra-wide-angle lens. Similarly, the Vivo X60’s 32MP selfie camera is objectively better than the OnePlus 9R’s 16MP module.

While the Vivo X60 clearly edges out the OnePlus 9R in some key specs, the latter’s battery capacity and charging speed is commendable. Both the phone should deliver similar performance with the Snapdragon 870 SoC, though the OnePlus phone gets a higher 12GB RAM option. Stay tuned for our review of the Vivo X60 and OnePlus 9R to find out which phone is worth buying over the other.