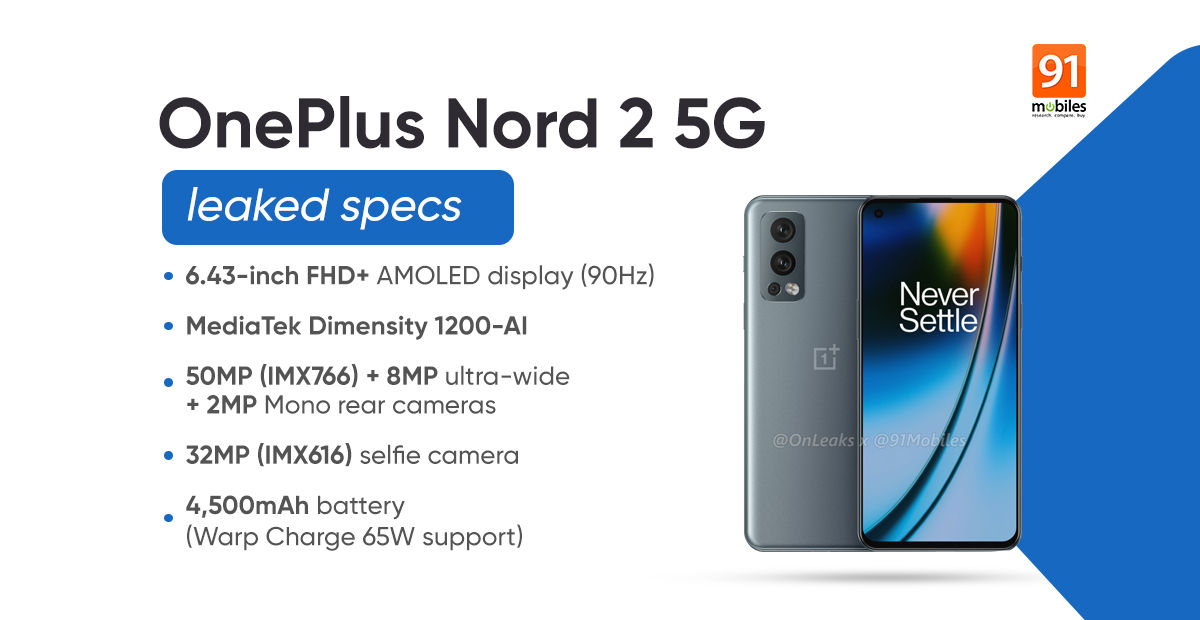 The OnePlus Nord 2 India launch date is July 22nd. The launch event will begin at 07:30 PM Indian Standard Time (IST) and it will be streamed live on YouTube. We will post the link to the live stream video of the event in this post as it goes live on YouTube. It is worth mentioning that this will also be the global unveiling of the phone.

According to the information that we have received, the OnePlus Nord 2 price in India will be Rs 31,999 for the base variant, which will have 8GB RAM + 128GB storage. The other model on offer will feature 12GB RAM + 256GB storage and it will be priced at Rs 34,999.

The OnePlus Nord 2 has been listed on Amazon India, which confirms that it will be sold through the e-commerce platform in the country. What we have also learnt is that the OnePlus Nord 2 will be available in two colour options, Grey Sierra and Blue Haze. There will also be a special edition on offer called Green Woods. It will have a leather back panel.

The company has already confirmed that the OnePlus Nord 2 will feature the MediaTek Dimensity 1200 AI SoC, which will be exclusive to the smartphone. This chipset will offer additional AI features compared to the standard, MediaTek Dimensity 1200 processor. The teaser page of the device on Amazon India reveals that the phone has Oxygen OS 11 customisation. It suggests that the device will come loaded with the Android 11 OS.

When it comes to imaging, OnePlus has already revealed that the phone will have a triple-camera setup at the rear with a 50MP Sony IMX766 primary sensor. This camera will also have optical image stabilisation (OIS). While the brand has not revealed details regarding the other two sensors, we have learnt that those will be 8MP ultrawide and 2MP macro/depth modules. At the front, there will be a 32MP camera sensor.

Coming to the battery, the OnePlus Nord 2 will have a 4,500mAh unit. It will most probably support 30W charging. As for the connectivity options, the 5G in the name of the smartphone confirms that the phone will have support for the 5G network. Considering that the OnePlus Nord 2 is a newly-developed smartphone featuring a high-end chipset, it should also feature dual-band Wi-Fi ac, Bluetooth v5.1, GPS, NFC, and a USB Type-C port.