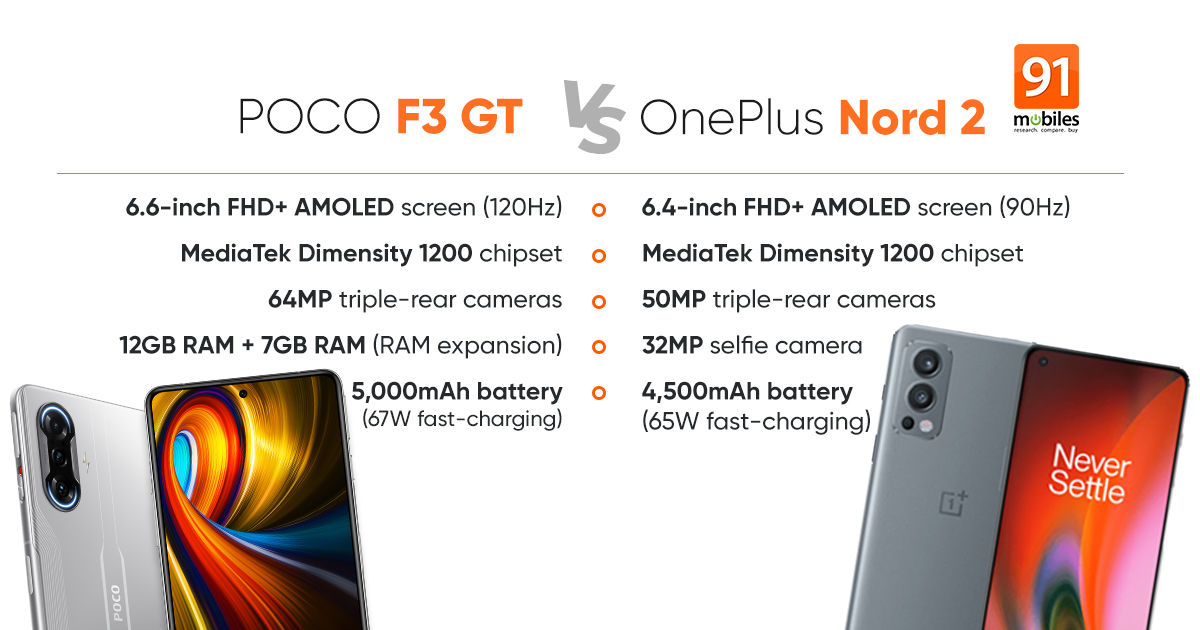 OnePlus and POCO both launched some impressively specced mid-range powerhouses within a day of each other. While both smartphones might look similar, there are a few differences that set them apart. It’s hard to tell which smartphone is ‘better’ as both the OnePlus Nord 2 and POCO F3 GT bring unique features to the table. This comparison boils down to what suits the end users’ needs better. Nonetheless, both choices are excellent in their own right. Let’s take a look at how the POCO F3 GT and OnePlus Nord 2 specifications, features, and prices in India to see how they fare against each other.

Right off the bat, the POCO F3 GT is the slightly more affordable option, as its price in India is set at Rs 26,999 for the base variant with 6GB RAM and 128GB storage. However, you can buy it for Rs 25,999 in the next two weeks.

Moving on to the OnePlus Nord 2, its base variant with the same 6GB of RAM and 128GB of storage costs Rs 27,999. However, you won’t be able to pick it up until August, and even then it will be available in limited quantities. For now, only the 8GB RAM + 128GB storage variant of OnePlus Nord 2, priced in India at Rs 29,999, will be up for sale as part of Amazon Prime Day sale and Red Cable First Sale on July 26th, followed by open sales of the 8GB + 128GB and 12GB + 256GB options on July 28th.

The POCO F3 GT has an objectively better display, thanks to its 6.6-inch FHD+ AMOLED panel clocked at 120Hz. It also supports HRD10+ and has a typical brightness of 500 nits. On the other hand, the OnePlus Nord 2 uses a smaller 6.4-inch OLED panel clocked at 90Hz and HDR10+ support. The difference between 90Hz and 120Hz isn’t that apparent outside of a few use cases such as gaming, so either choice is fine.

Both phones are more or less tied in this regard, as the OnePlus Nord 2 and POCO F3 GT pack an identical MediaTek Dimensity 1200 chipset. It all boils down to the software, really. OxygenOS is arguably better off, as it receives much better support compared to MIUI, although OnePlus has been messing up some of its recent updates.

The POCO F3 GT packs a 5,000mAh battery that supports fast charging at 67W. In comparison, the OnePlus Nord 2 scales that down to a 4,500mAh and 65W charging. The extra 2W of wattage might not mean a lot, but the 500mAh difference can make quite a difference. Therefore, the POCO F3 GT is the better choice here.

We’d recommend the POCO F3 GT for those who use their smartphones for gaming more than anything else. Its 120Hz screen, large battery, and capacitive triggers make it a powerful gaming smartphone. Camera aficionados are better off with the OnePlus Nord 2, as its primary image sensor is much better than the POCO F3 GT. It shouldn’t be long before a GCam port for the phone arrives, meaning that you don’t have to rely on OnePlus’ lacklustre camera app for your photography. But you should wait for our in-depth comparison between the two smartphones before making the final buying decision.