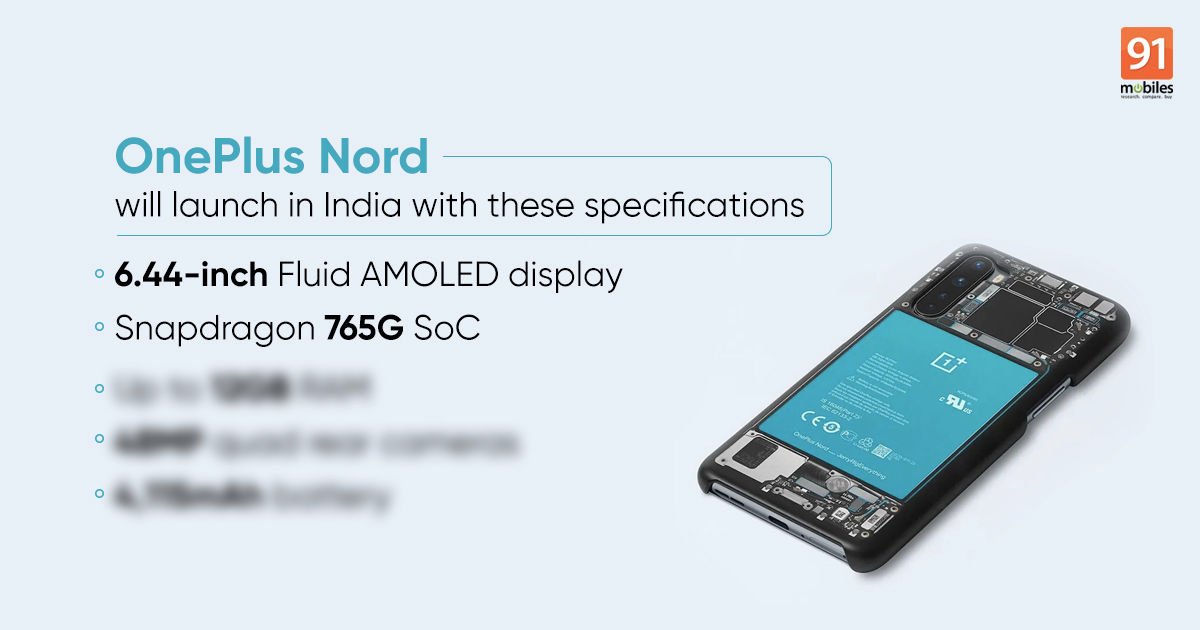 OnePlus Nord is the most ambitious smartphone from the brand in recent years as it marks the company’s comeback of sorts in the mid-range segment after almost six years. The OnePlus Nord India launch is slated for July 21st. The specifications and price of the phone have either been confirmed or leaked. Now, popular tipster Evan Blass has shared an image that reaffirms almost everything we know about the OnePlus Nord. The image, he said, has come from a virtual presentation of the OnePlus phone and the ‘phone imagery’ is just a “place holder.”

The OnePlus Nord is confirmed to feature an edge-to-edge AMOLED display, with dual punch-hole for selfie cameras in the top-right corner. The image reveals that the handset will have a 6.44-inch Fluid screen that bears 90Hz refresh rate, FHD+ resolution, 20:9 aspect ratio, and 408ppi pixel density. The phone is going be a 5G offering with Snapdragon 765G chipset, which looks like will be aided by 8GB/ 12GB LPDDR4X RAM and 128GB/ 256GB storage options.

Around the back, the Nord may feature Corning Gorilla Glass and quad rear cameras, which as teased by OnePlus will be vertically-aligned in the top left corner. The setup will allegedly feature 48MP Sony IMX586 (f/1.75) primary sensor with OIS+EIS, 8MP 119-degree wide-angle sensor, 5MP (f/2.4) macro sensor, and 2MP (f/2.4) depth sensor. Up front, it’s tipped to feature 32MP main sensor and 8MP secondary snapper for selfies and video calling.

OnePlus Nord will most likely be driven by Android 10-based Oxygen OS 10 out of the box. A 4,115mAh battery with 30T Warp Fast charge is said to fuel the handset. The phone will have both in-display and face unlock for security, NFC, Bluetooth v5.1, Wi-Fi, MIMO, Linear motor vibration, and Cine aspect ratio video, per the image. Lastly, you can expect the phone in Blue Marble, Gray Onyx, and Gray Ash colour options.