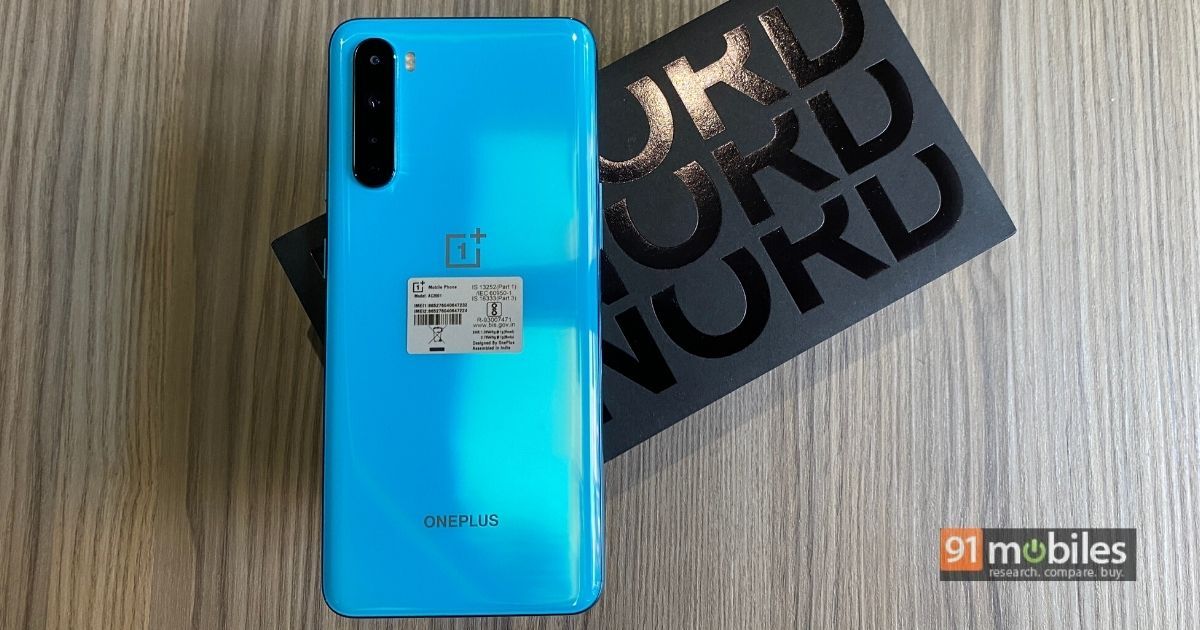 If there’s one thing that has been OnePlus’ mainstay over the years, it has to be value for money. Flagship specs offered at much lower prices than premium smartphones has been the mantra for the brand, and that too without compromising on any of the key aspects. Over time though, the value proposition has changed quite a bit. You see, slowly and steadily, OnePlus has started encroaching upon premium flagship territory by introducing Pro versions of its handsets and climbing the price ladder. The latest OnePlus 8 Pro (review) for instance, starts at Rs 54,999, and at that price, goes dangerously close to handsets like the Samsung Galaxy S20. Don’t get me wrong – the OnePlus 8 Pro is still solid value for money even at that price. That said, there’s no denying the fact that the brand has vacated the Rs 25k to Rs 35k smartphone price category long ago, a segment which it used to rule at one point. With the new OnePlus Nord, it seems to eyeing that segment again, and perhaps going back to its roots in some sense… a fact which is also evident from the new, affordable range of smart TVs it launched recently. 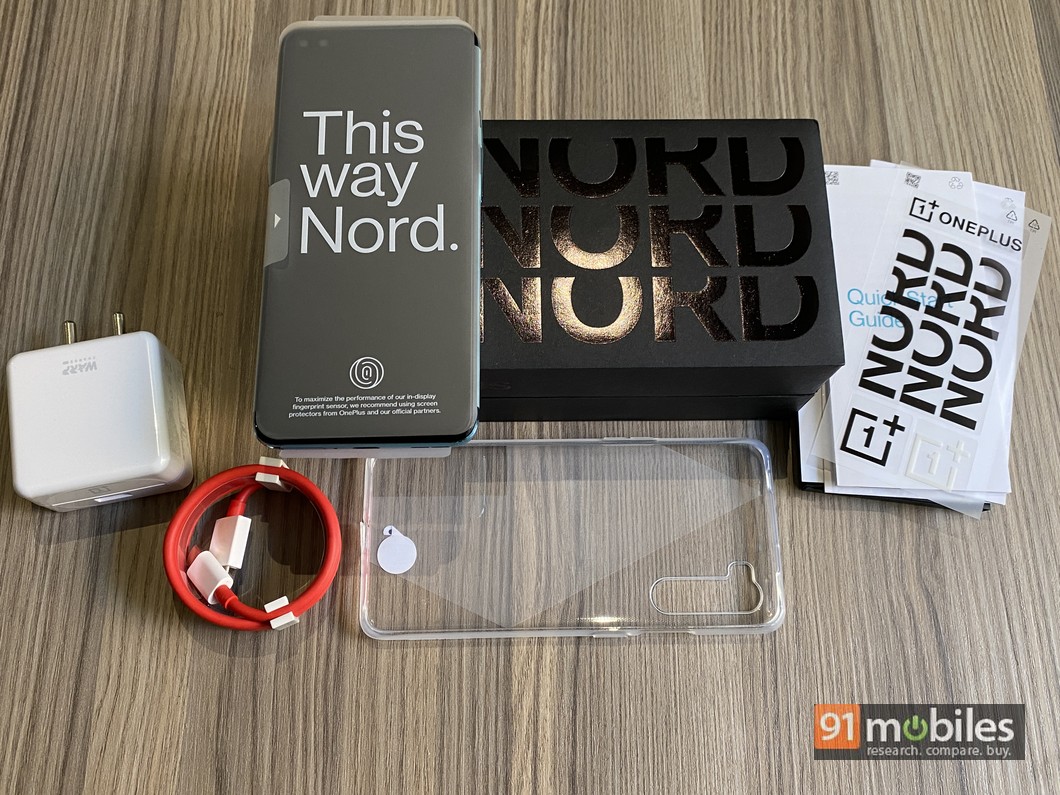 Before we get up close and personal with the Nord, let’s take a gander inside its retail box. The black box has the Nord branding plastered on top, and opening it reveals the phone lying atop a plastic tray inside. A small cardboard envelope includes a silicone case, a SIM eject tool, the usual documentation and a welcome letter. Below that, you’ll find the Warp charger and the signature red Type C cable. A 3.5mm to Type C dongle is conspicuous by its absence. 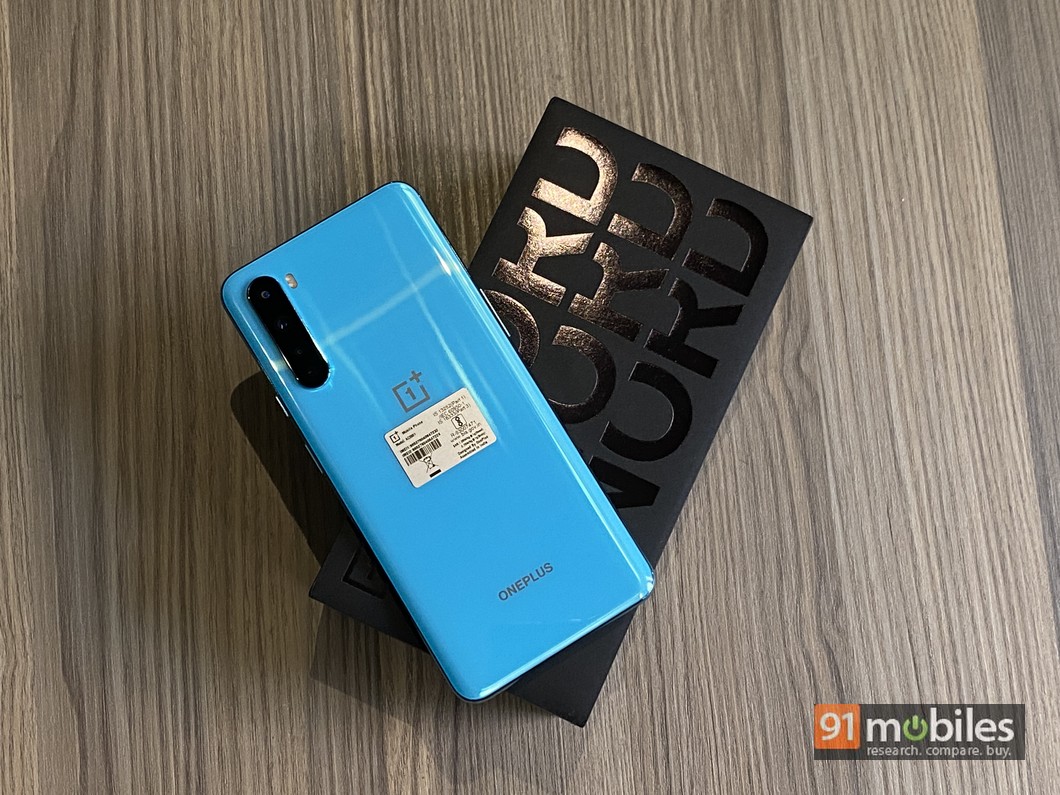 The word ‘Nord’ means north, and that’s the direction brand OnePlus says it has taken over the last few years, referring to its growth. Obviously, it would want to take the same direction going forward too, with the new Nord adding to its user base. The OnePlus Nord is a compact phone with a youthful appearance, at least the Marble Blue unit we have with us for review. It might be more affordable compared to the other, recent OnePlus phones, but the Nord still sticks to the brand’s ideology of ‘premium for less’. It exudes class with its metal frame and Gorilla Glass-layered body. 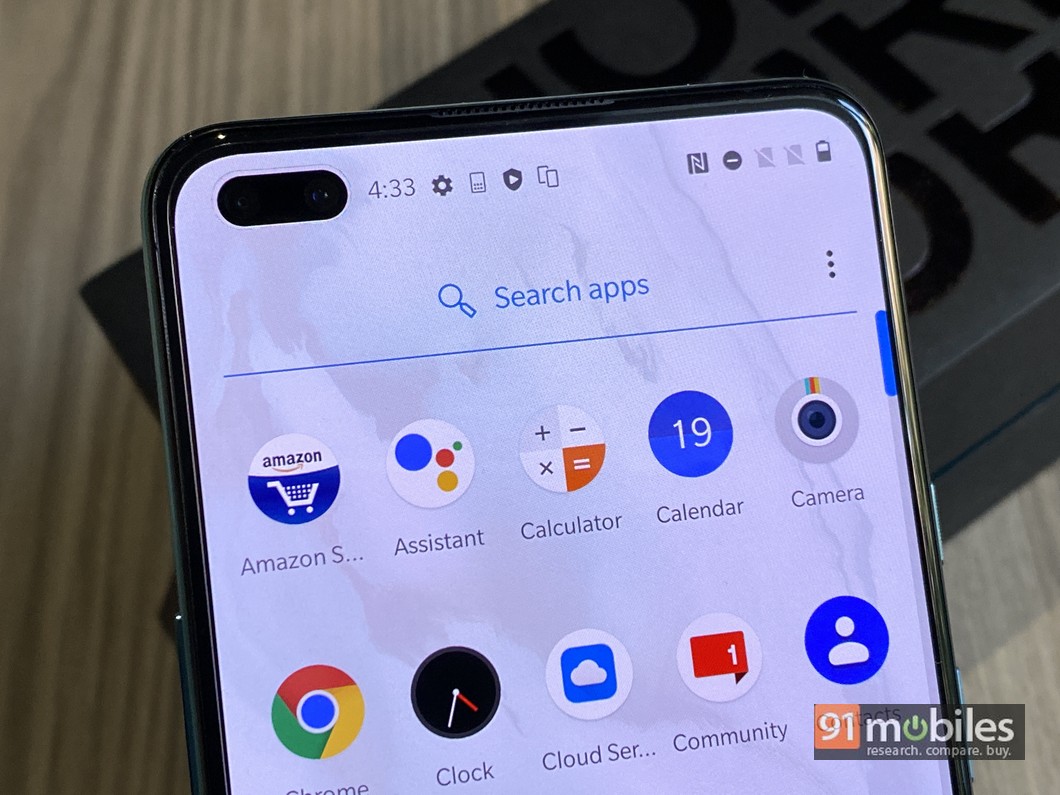 The 6.44-inch screen at front is almost bezel-less, with the two front shooters peering back at you like a pair of eyes from the top left corner. You heard that right – the Nord has not one, but two selfie cameras, with the 32MP main sensor aided by an 8MP ultra-wide sensor for group selfies. The 20:9 FHD+ screen uses AMOLED tech, offers a refresh rate of 90Hz and integrates a fingerprint sensor beneath. And as one would expect, the fluid AMOLED panel outputs vibrant colours and deep blacks. At the back, the quad camera module sits in a vertical strip placed on the top left, with the LED flash next to it. You’ll see the brand’s logo in the middle, and OnePlus branding closer to the bottom. On the right spine, you’ll find the Alert slider and the power key, while the volume rocker is placed on the left. The bottom is home to a dual-SIM tray, the Type C port and the speaker. There’s no 3.5mm headset socket, alas. This is a tad disappointing, but not completely unexpected. 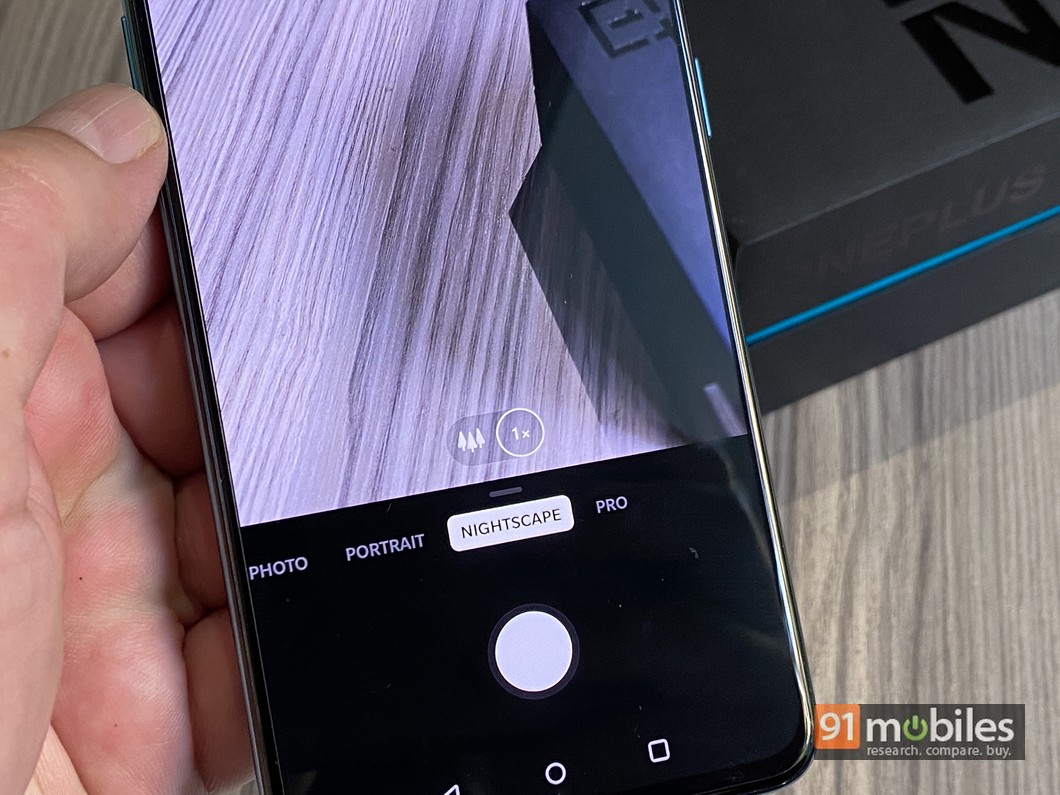 The quad cameras on the rear comprise a 48MP primary snapper that utilises Sony’s IMX586 sensor and has an aperture of f/1.75. Do note that this sensor features OIS. Then, there’s an 8MP ultra-wide (f/2.25) with a field of view of 119 degrees, a 2MP macro and a 5MP sensor for depth. The camera offers all the usual features like support for shooting 4K video at 30 fps, along with features like Nightscape, AI scene detection and a Pro mode that shoot in RAW. There’s support for shooting Super Slow mo videos at 1080p (240 fps) and time lapse videos at 4K 30 fps. Preliminary shots captured using this setup look promising, though it’s a tad early for us to comment on the OnePlus Nord’s shooting capabilities. 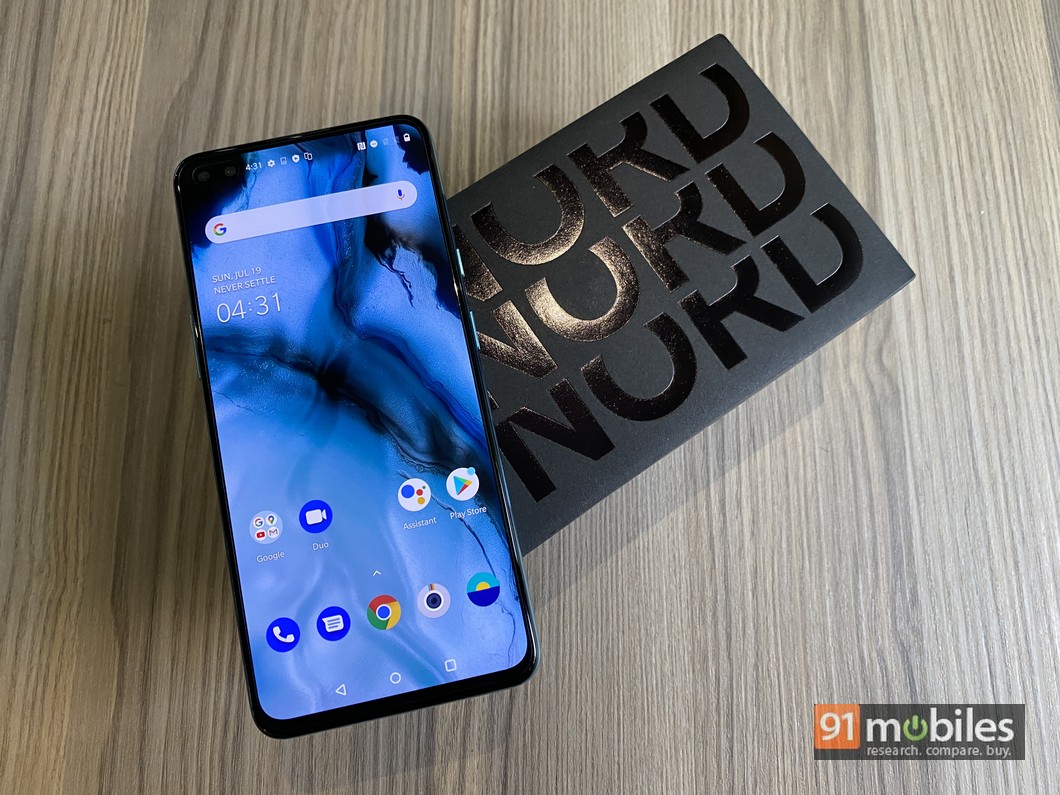 Inside purrs Qualcomm’s mid-range Snapdragon 765G chipset, which is a 5G-capable SoC and uses Adreno 620 graphics. Worth mentioning that as of now, the only smartphone in the country that uses the same chipset is the newly-launched Vivo X50 Pro. The SD765G isn’t as powerful as the top-end Snapdragon 865 that powers the OnePlus 8 and the 8 Pro, but it touts improved CPU speeds and 30 percent faster graphics rendering than its predecessor, the SD730G. It features a dedicated AI Engine too, and promises smooth performance. Further, OnePlus says it has added over 300 optimisations to the Nord, both at the hardware and software level to be able to deliver a fast and smooth experience. We’ll be putting that claim to the test very shortly, but for now, you should know that the Nord runs Oxygen OS 10.5 (based on Android 10), and comes with the staple features like a dark mode, Zen mode and the usual slew of customisation options. Based on our beef usage, we can safely say that the usage does seem pretty smooth, though a verdict on whether the Nord deserves your moolah is a discussion for another day.

As far as other core specs like RAM and storage are concerned, the Nord would be available in three variants: 6/64, 8/128 and 12/256GB. The base model with 6GB RAM and 64GB storage (UFS 2.1) is a special India-only variant in fact. A 4,100mAh battery powers the phone, and in true OnePlus style, supports 30W fast charging, with the Warp Charge 30T charger in the box that promises to juice up the battery to up to 70 percent levels within half an hour. 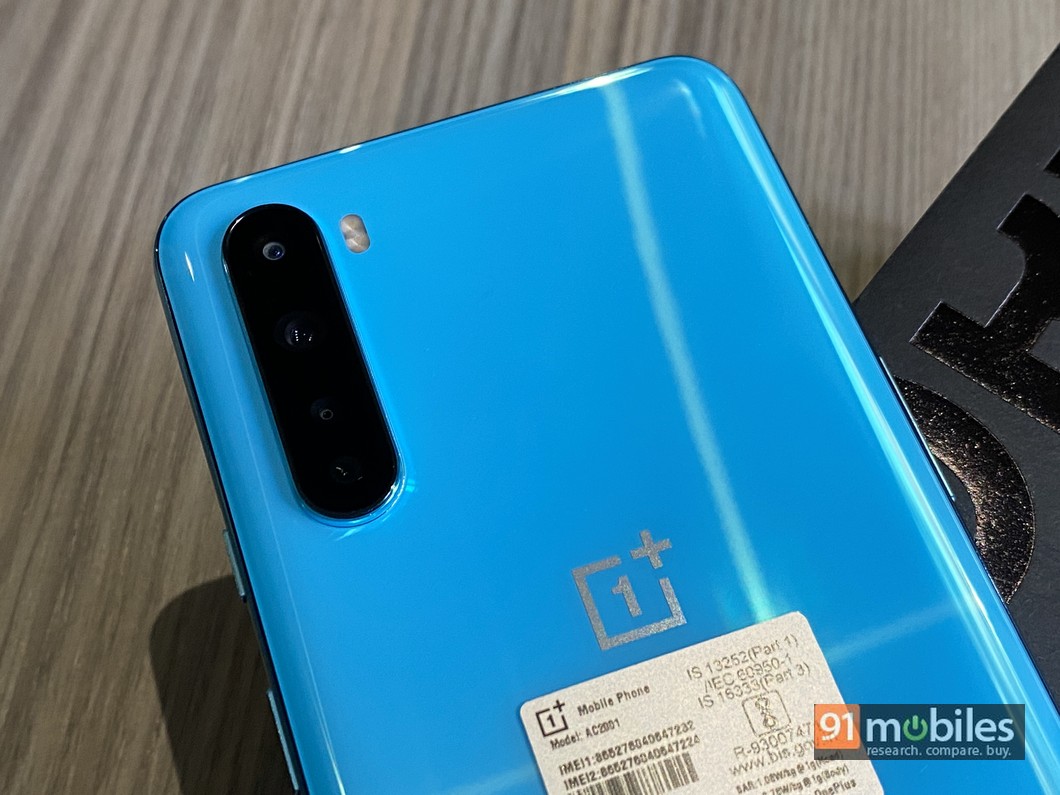 With a starting price of Rs 24,999, the OnePlus Nord does come across as an extremely attractive option, both on paper as well as based on our initial impressions. The Great Indian Smartphone Bazaar is a tricky place though, and it remains to be seen whether the new phone will be able to enjoy the same level of popularity and see the same levels of success as some of the previous phones from OnePlus. New flagship-level smartphones from brands like iQOO and Realme, VFM devices from a resurgent Samsung, and camera beasts from brands like OPPO and Vivo, are just some of the options vying for your hard-earned money. It’ll be interesting to see if the OnePlus Nord, which is a compelling choice priced south of Rs 30k, can actually propel the brand north or not.