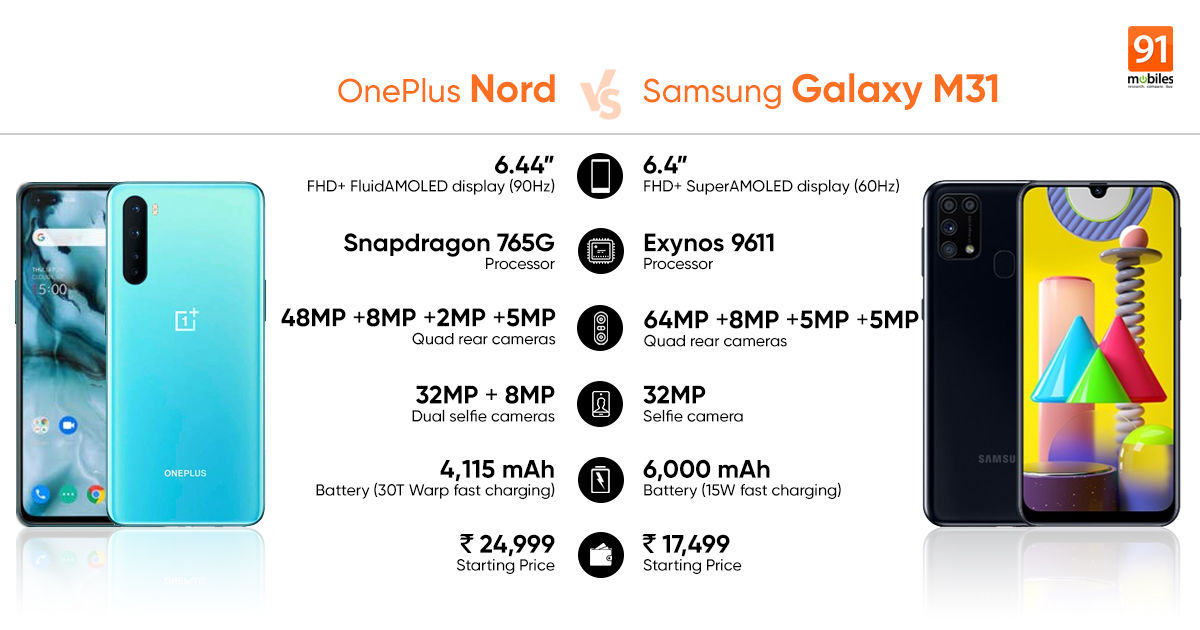 OnePlus Nord has launched in India starting at a sub-Rs 25,000 price point, although there is a catch (which we will discuss in a little while). OnePlus hasn’t launched phones in this price bracket in many years and things are much different now in 2020. We have extremely competitive phones today under Rs 20,000 that can punch well above their weight. The upcoming Samsung Galaxy M31s is shaping up to be one such model. The Samsung phone may not look as well-rounded as the OnePlus Nord, but it does come with some features and specifications that even the Nord doesn’t offer. Here’s a closer look at how the two phones compare, based on the rumoured/ expected specifications and price of the Samsung Galaxy M31s.

The OnePlus Nord price in India starts from Rs 24,999 for the base model with 6GB RAM and 64GB internal storage. This variant, however, will not be available until September. The phone comes in 8GB + 128GB and 12GB + 256GB variants that will be on open sale from August 4.

The OnePlus Nord sports a 6.44-inch display and the Galaxy M31s is also expected to feature a similar display size. Both displays offer FHD+ resolution and use AMOLED panels. Samsung is of course known for delivering stunning AMOLED displays and in our review of the previous Galaxy M31, we found the display to be vibrant and bright with excellent viewing angles and deep blacks. We’re not quite sure which panel OnePlus is using, but our initial thoughts on it are positive as the display looks bright and rich.

The OnePlus Nord, however, gets the added advantage of offering a 90Hz refresh rate for a smoother scrolling experience. The Galaxy M31s will come with a standard 60Hz refresh rate, which is fine if you’re not used to high refresh rate displays.

The OnePlus Nord is powered by the 7nm Snapdragon 765G 5G chipset, which is one of the most powerful mid-range processors in the market right now. This is paired with up to 12GB of RAM for smooth and lag-free multitasking. The Galaxy M31s doesn’t deliver quite the same amount of power as it is rumoured to come with the same Exynos 9611 chipset that powered the predecessor, paired with up to 8GB RAM.

Things are quite interesting in the camera department. The OnePlus Nord is equipped with a quad camera setup that include a 48MP Sony IMX586 sensor, an 8MP wide-angle lens, a 5MP depth sensor and a 2MP macro lens. The Galaxy M31s, on the other hand, will launch with a higher resolution 64MP primary camera. While other cameras remain vague at the moment, we expect to see an ultra wide-angle lens, a depth camera and a macro lens. On paper, the Galaxy M31’s rear camera setup looks better thanks to a higher resolution primary camera and macro lens. However, OnePlus says the Nord’s camera system has been optimised to deliver a flagship camera experience, which we will know for sure in our full review.

Lastly, we come to the battery where the upcoming Samsung Galaxy M31s wins hands down in terms of size. The phone houses a massive 6,000mAh battery as opposed to The OnePlus Nord’s 4,115mAh capacity. This means you’re going to get a day and a half to days of battery life with the Samsung phone while the Nord should last a full day on a single charge. However, the OnePlus Nord charges faster with a 30W charging tech, while the Galaxy M31s supports 25W fast charging.