91mobiles.com
Home Android Phones OnePlus One available to buy without an invite in India tomorrow 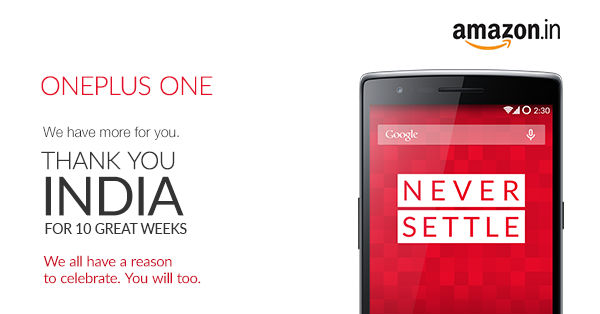 The Chinese smartphone maker OnePlus is celebrating 10 weeks of the sales of the One (review | cheatsheet) in India. The company will put up the flagship smartphone for an open sale on Amazon on February 10th at 10 am, without the need for any invites. There’s no word from the company about how many units of the phone will be up for grabs. Earlier, you could only purchase the device if you had an invite.

OnePlus launched its first and only smartphone till date, the One in December in India. The company is selling the 64GB storage variant of the device in India, which is priced at Rs 21,999. The smartphone runs CyanogenMod based on Android 4.4 KitKat. Since Cyanogen Inc. has dropped support for the phone in India due to licensing issues, OnePlus will be releasing its own ROM for the device called Oxygen OS on February 12th.

To recap, the OnePlus One flaunts a 5.5-inch full-HD display, and is backed by a Qualcomm Snapdragon 801 CPU clocked at 2.5GHz coupled with 3GB of RAM and a 3,100mAh battery. Other specs include 13MP/5MP cameras, 4G LTE, and NFC.