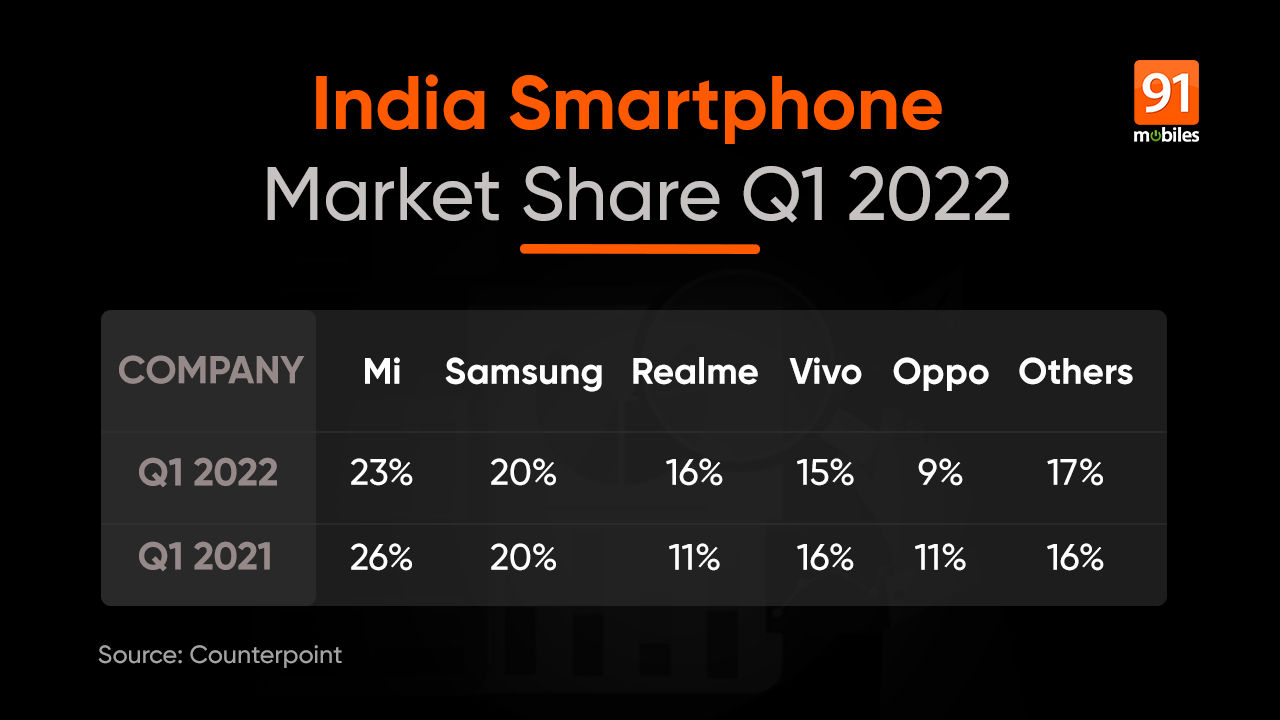 Counterpoint has shared a report on Indian smartphone shipments for the first quarter this year and the market share of each smartphone brand. Despite the third wave of Covid-19 in January, the Indian smartphone market saw stable unit sales in the majority of brands. However, the Indian market was hit with a 1 percent decline year-on-year because of the global component shortages. The same cannot be said of China, as the country has been in a lockdown state, since January.

Leading the list in India is Xiaomi, with a 23 percent market share to its name. However, Realme and OnePlus saw the most sales gains, thanks to OnePlus Nord CE 2 and OnePlus 9RT. 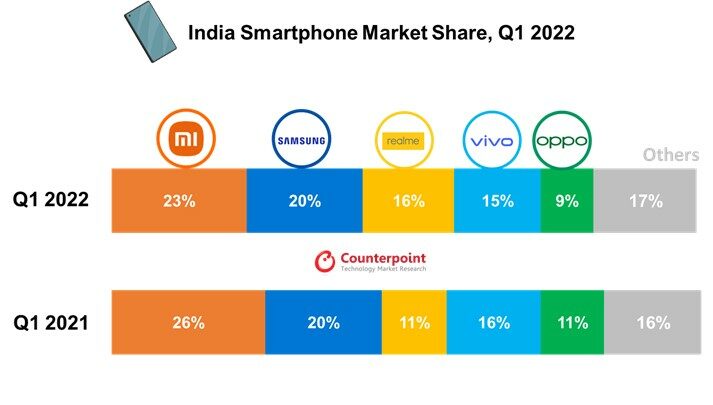 Xiaomi sold the most smartphones in India, sitting at the top sport, despite component shortages. The reason for such huge sales is multiple 5G handset launches and the revamped Xiaomi Note series. However, the figures don’t compare favourably to last year, as Xiaomi saw a loss of 13 percent in year-on-year growth.

Next in line is Samsung, which remains the top-selling 5G smartphone brand in India. The reason for this is the debut of its flagship Galaxy S22 series and a slew of A-series and M-series smartphones, targeting each price segment from affordable to premium flagship segment. Like Xiaomi, Samsung was also hit by a 1 percent decline in year-on-year growth.

Realme was also among the fastest-growing brands, overtaking both OPPO and Vivo. The brand saw a 40 percent growth compared to last year. The reason for this could be Realme’s strategy of launching fewer phones in different segments, targeting a wider audience. The company also partnered with Unisoc to power the majority of Realme smartphone.

OPPO and Vivo of the BBK group were hit by an 18 percent and 8 percent decline year-on-year. The main reason for this could be that most of the sales of OPPO and Vivo come from the offline market, and due to the Omicron wave in the country, the company was not able to meet the sales goal in the first quarter of the year.

However, Vivo is doing well with its latest T-series launch and sub-brand iQOO, with a positive response from buyers. The same goes for OPPO, as the company’s latest Reno 7 series and K-series received a thumbs-up from the audience, and the company could gain a stronghold in the upcoming weeks.

Apple saw a 5 percent year-on-year growth in Q1 2022. The company retains its title as the top-selling brand in the premium smartphone segment. This is because of aggressive offers and price drops on the iPhone 12 series and iPhone 13 series. 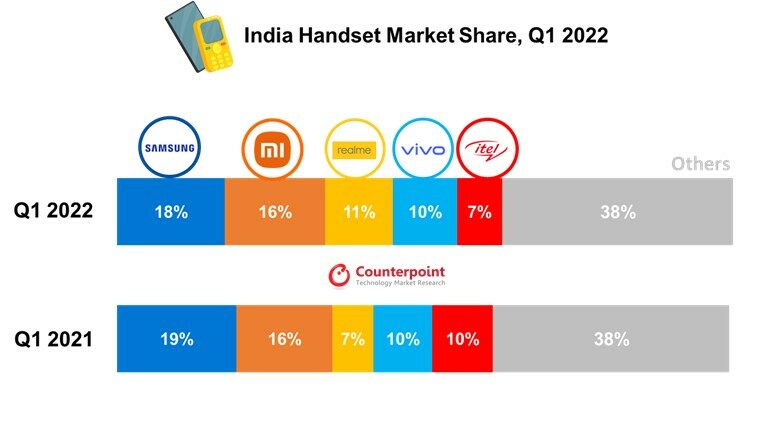 Lastly, the Transsion Group – itel, Infinix, and TECNO, captured 11 percent of the Indian smartphone market. The itel, with a 61 percent share, was leading the entry-level smartphone segment, thanks to the itel A23 Pro and A27.