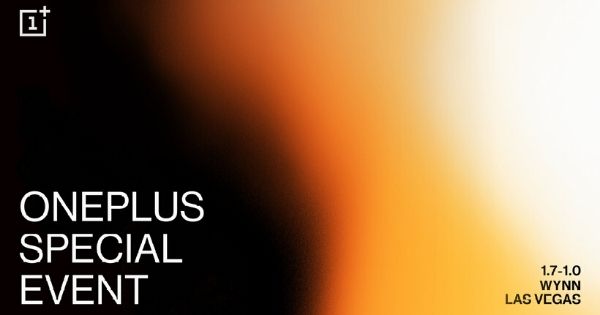 OnePlus will be showing off something special at CES 2020. The company has started sending out invites to the press and media. The invite doesn’t reveal any details regarding what to expect, but it does include the date and location. This is OnePlus’ first time at the Consumer Electronics Show, which happens every year in Las Vegas. The OnePlus special event is scheduled to take place during the CES show, which is from January 7th to 10th. OnePlus will be making the announcement at the Wynn Resort in Las Vegas. We have no idea what the company plans on unveiling at this event.

The timing is off for a new phone launch, as OnePlus usually keeps those events for latest in the year. The teaser image does include the colours that the company has used in its McLaren Edition smartphones. Apart from that, all we see is the OnePlus logo, the date and location, and a text saying ‘OnePlus Special Event’. The invite was first shared by @saschasegan on Twitter. OnePlus CEO Pete Lau shared the tweet and stated ‘We’ll show you something special’. Again, no idea what he is referring to here. It could be a new product, perhaps a smartwatch, or truly wireless earbuds.

We'll show you something special. See you in Las Vegas.😎 https://t.co/22Vb4Gr0Zk

OnePlus could also utilise the CES event to launch the OnePlus TV in the US. The company is currently selling its high-end TVs only in India, but that could change next month. It is also possible that we could see a McLaren-related product, due to the colours seen in the teaser. A McLaren Edition 5G smartphone is already available though, so we can’t think of anything special that the company would want to showcase.

In other news, there have also been rumours about a mid-range OnePlus smartphone. The company hasn’t launched a mid-range device in a long time. Since OnePlus hasn’t given out an exact date for the event, there could more than one announcement. We have to wait till next month to find out.