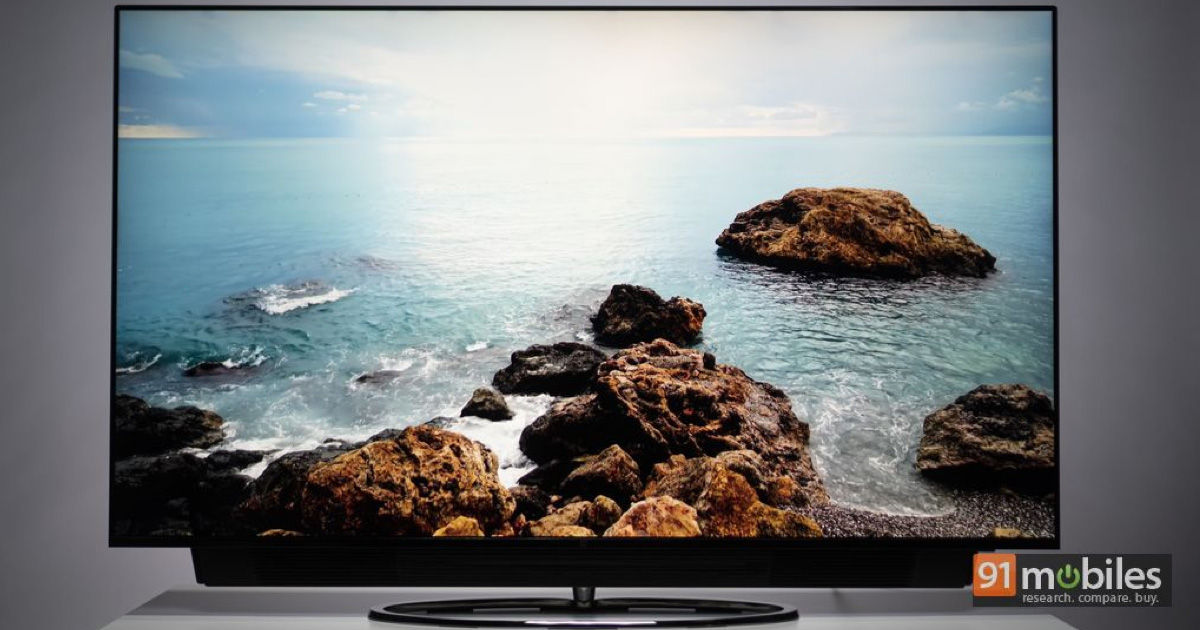 OnePlus recently launched its latest flagship smartphone in India and for the first time in a while, the handset wasn’t the showstopper. You see, OnePlus is now venturing into the smart TV space and as good as the OnePlus 7T is, all eyes were on the new OnePlus TV Q1 Pro at the launch event.

Thankfully, folks at OnePlus were kind enough to send us a unit a couple of days before the launch and having spent some time with it, I have some thoughts. Here are my first impressions of the OnePlus TV Q1 Pro. If looks could kill, the OnePlus TV Q1 Pro would at least maim you. From a distance, the Q1 Pro doesn’t come across as a feeble first attempt but rather, a compelling product from an experienced TV manufacturer. From the choice of materials, which includes aluminium for the base, carbon fibre print for the TV’s back and soft, mesh material for the sliding soundbar, to the unit’s heft, the Q1 Pro will sit and look pretty at any desk (or wall) in your house.

Speaking of heft, the Q1 Pro weighs quite a bit and therefore, installing (or disassembling) the TV is most certainly a two-man job. What’s more, while I absolutely loved the design of the unit, I will admit, I would’ve liked a thicker spine to hold the TV’s frame. As it stands (no pun intended), the panel wobbles a bit when stationed on a desk which didn’t instill a lot of confidence in me. On the bright side, the TV ships with a treasure cove of ports towards the back, which have been tidily covered via a removable flap. I quite like this approach as it ensures the continuity in the set’s design and, prevents dust and other particulates from seeping into the frame. Nice work, OnePlus. 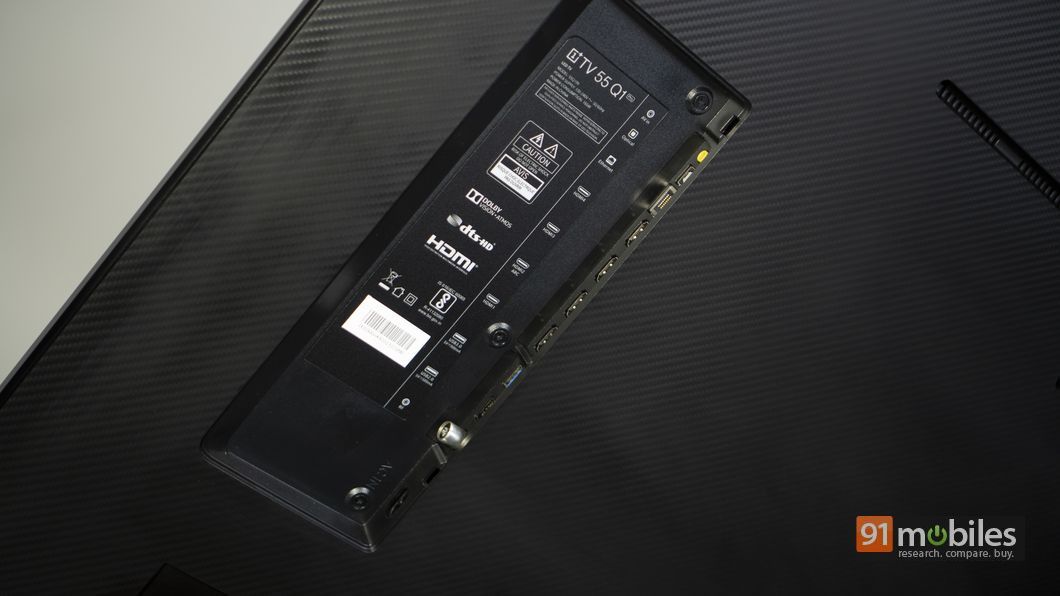 Coming back to the ports, the Q1 Pro offers an AV-in slot, an optical connector, an Ethernet port, four HDMI ports (out of which one supports ARC), a USB 3.0 port, a USB 2.0 port and an RF connector towards the back of the unit. Up top, the set features a USB Type-C port which too has been covered with a small flap. 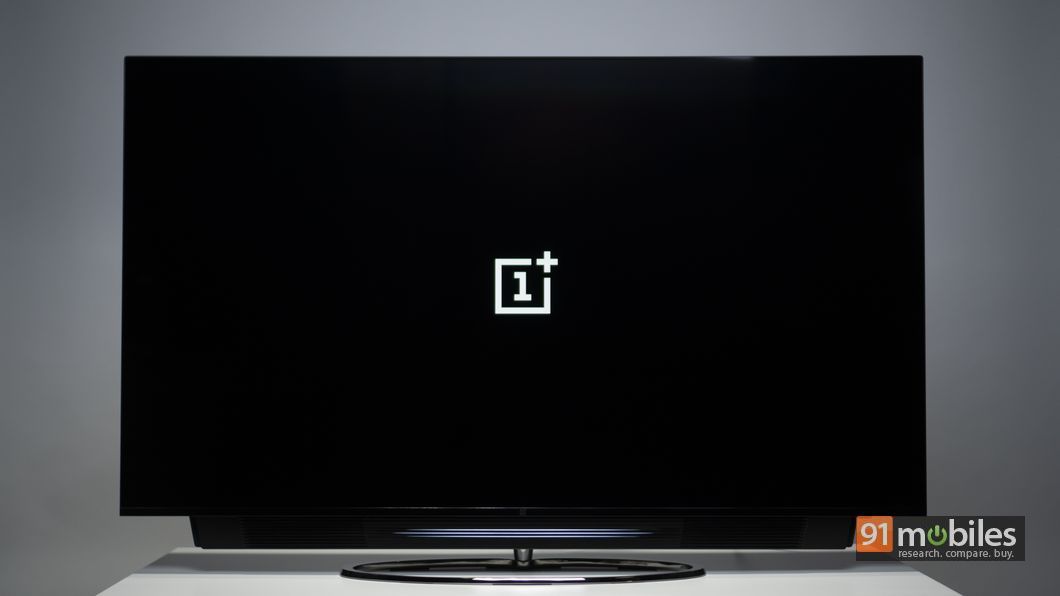 OnePlus isn’t just playing hide and seek with the ports on the Q1 Pro, mind you. In fact, the TV’s soundbar is attached towards the back of the unit which at first, led me to believe that the Q1 Pro doesn’t ship with front-firing speakers. However, upon turning the TV on, the soundbar dramatically slid downwards, until the speaker grille was facing in my direction. What’s more, the brand has installed LEDs inside the speaker which light up elegantly every time you turn the set on. OnePlus calls this the TV horizon light and it’s oddly calming to watch it light up. 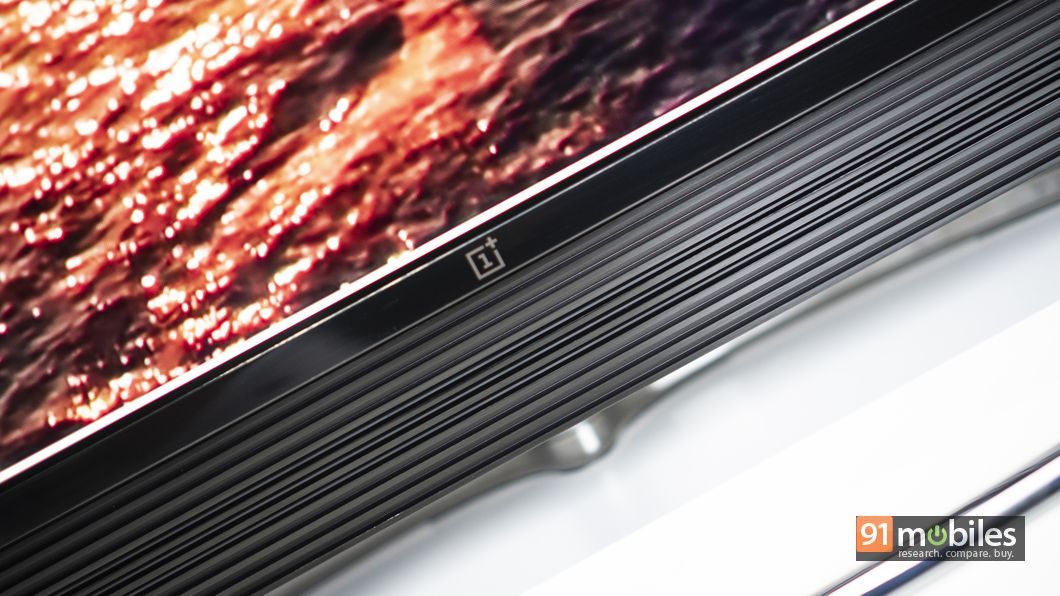 Looks aside, the speaker unit packs a wallop and inside, buyers will find an eight speaker system comprising four full-range speakers, two tweeters and two woofers. With their powers combined (excuse the Captain Planet lingo), the OnePlus TV Q1 Pro offers a whopping 50W sound output. And sure enough, during my initial testing, the TV got uncomfortably loud at max volume levels. Thankfully, the audio didn’t distort or get muddy and every sound was reproduced with pristine clarity and conviction. That said, I expected more oomph from the unit’s low-end output as beats felt a tad bit on the flatter side. 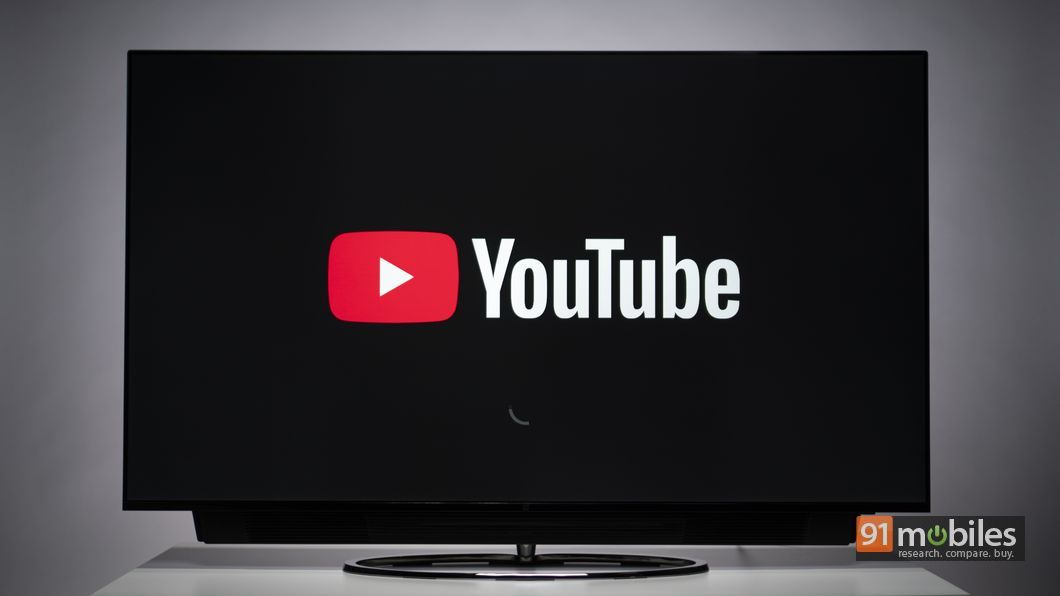 I’d also like to add that while the speaker setup offers a 2.1 channel surround sound, the Q1 Pro is Dolby Atmos and DTS:HD certified so you should be able to play content with spatial audio on the unit. Unfortunately, I couldn’t quite test the feature during my initial stint with the TV, so stay tuned for our full review for more details on the same. 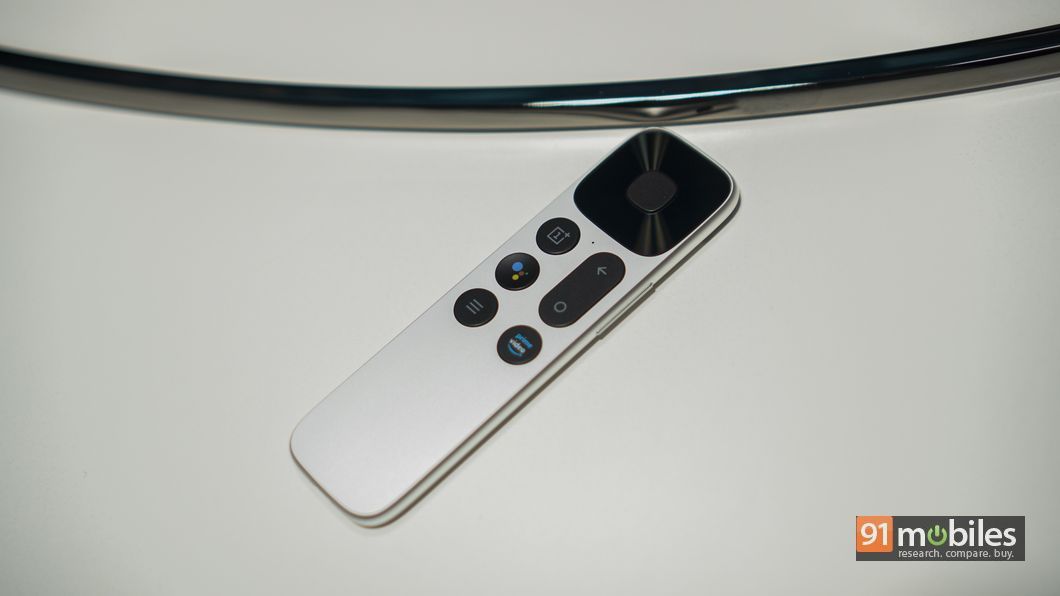 Before I talk about the TV’s display, allow me to shed some light on the unit’s remote. The Q1 Pro’s remote is a physical embodiment of the company’s minimalistic design approach, as it’s extremely sleek and features as few as six buttons and a D-pad. Interestingly, the volume rocker has been positioned on the remote’s right-hand spine (akin to a smartphone) which looks really cool. Moreover, the remote comes with a built-in mic, which you can use to talk to the TV and open apps and shows in a jiffy. 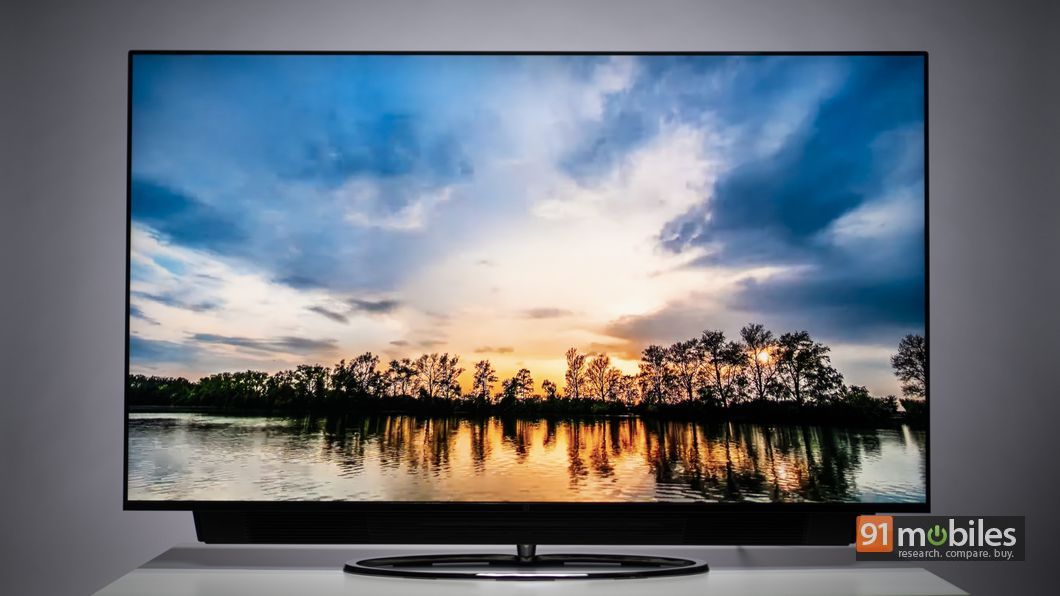 On to the display now. The OnePlus TV Q1 Pro sports a 55-inch, 4K, QLED panel. Now, for the uninitiated, QLED stands for Quantum dot LED and as its moniker suggests, the panel is a variation of LED/LCD displays that can be found aplenty in electronics stores. That said, in QLED TVs, a layer of quantum dots film is sandwiched onto the LCD panel which when hit by the LED backlight, emit a light of their own. In a nutshell, QLED TVs tend to be very bright, and the Q1 Pro from OnePlus is no different. 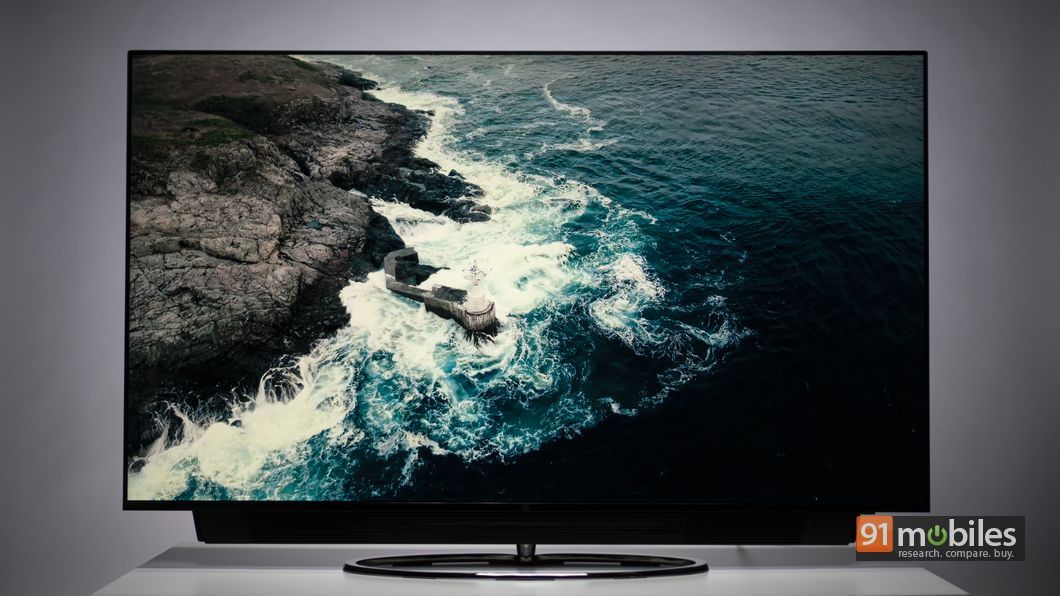 The 55-inch display on the Q1 Pro is plenty sharp, thanks to its 4K resolution and is extremely vivid too. That said, it doesn’t score too high in terms of black levels or contrast and with the lights turned off, I could see the backlit bleed in from the panel’s edges. Regardless, the picture quality of the OnePlus TV is still very good, and I revelled streaming videos from Prime on the unit – the colours looked tasteful and the bezel-less display offered an immersive viewing experience which is hard to beat. What’s more, the TV even ships with support for HDR10, so you should be able to enjoy improved colour depth on compliant media. 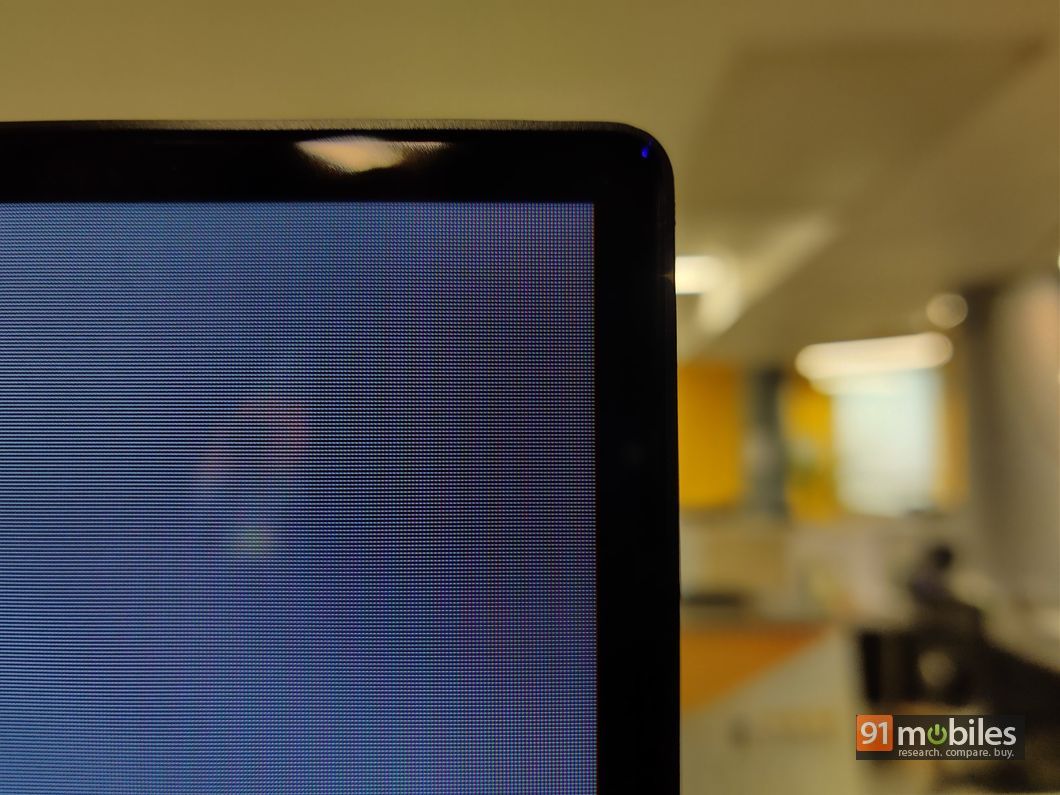 I have but one qualm with the display on the OnePlus TV Q1 Pro, which could solely be limited to my loaner unit. The top right bezel on the set had a tiny ding, which emanates a blue light and it caught my eye the second I turned on the TV. I’ve reached out to folks at OnePlus for more clarification on the same, so I’ll update you as soon as I have more information on the defect. 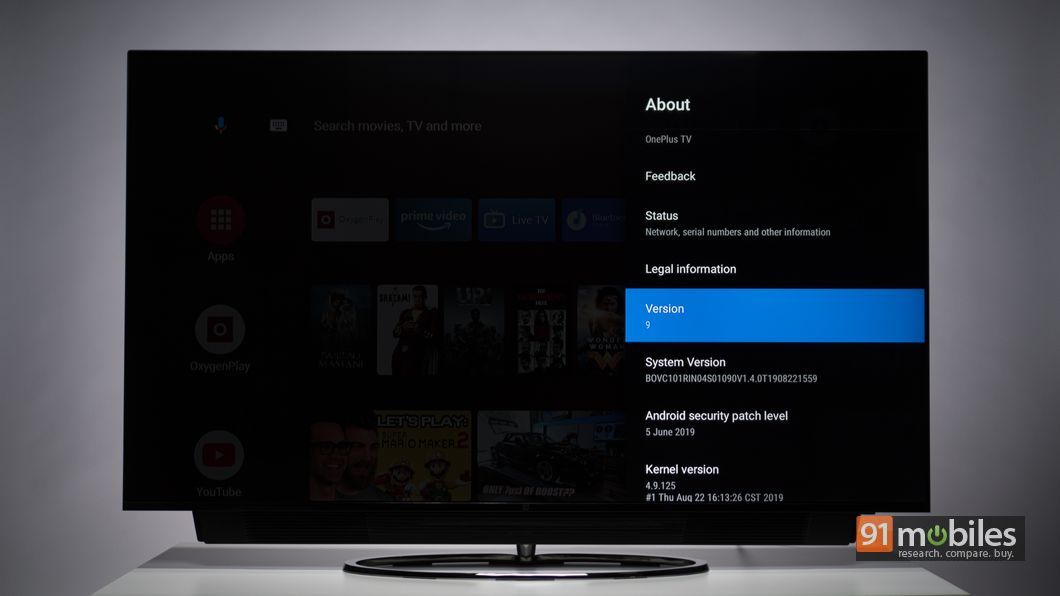 Lastly, allow me to briefly talk about the TV’s performance and software. Much like its smartphones, OnePlus’ Q1 Pro too offers a minimalistic overlay on top of Google’s Android TV interface. The unit boots Android Pie and ships with 8.6GB of built-in storage. The company hasn’t disclosed the rest of the specs of the TV yet, but let me assure you that the Q1 Pro is among the quickest smart TVs I’ve used in a while. Switching through different apps is a breeze on the TV and the system animations rarely ever felt delayed or jittery. 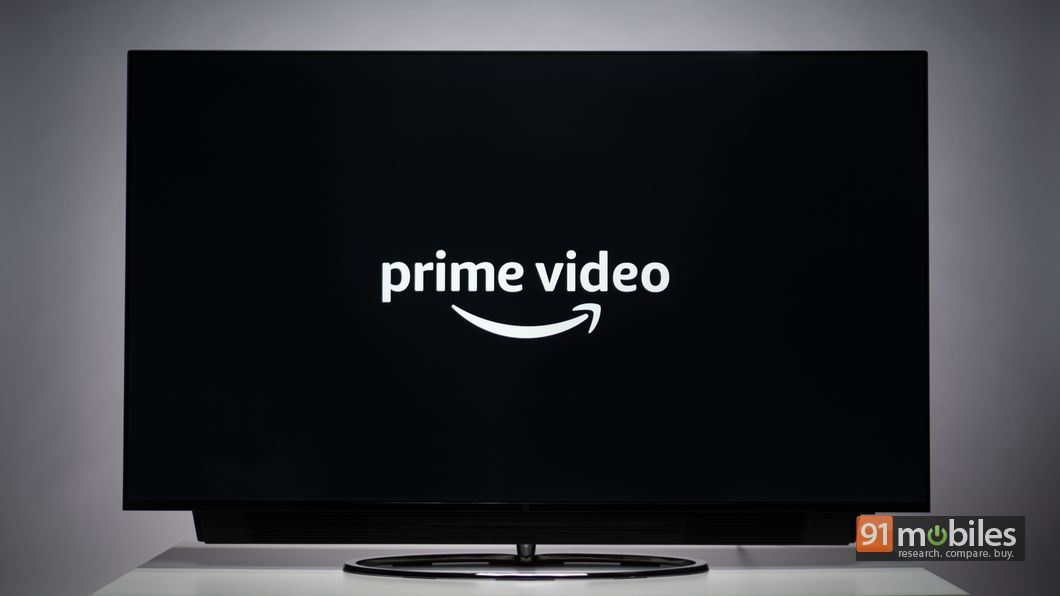 What’s more, unlike most Xiaomi TVs, OnePlus has even included support for Netflix (will be available down the line) and Amazon Prime video on the Q1 Pro, which is neat. You’ll also get OxygenPlay with the device, which coagulates local content providers like Eros Now, Zee5 and Hungama under one roof and lets you access their licensed content easily. 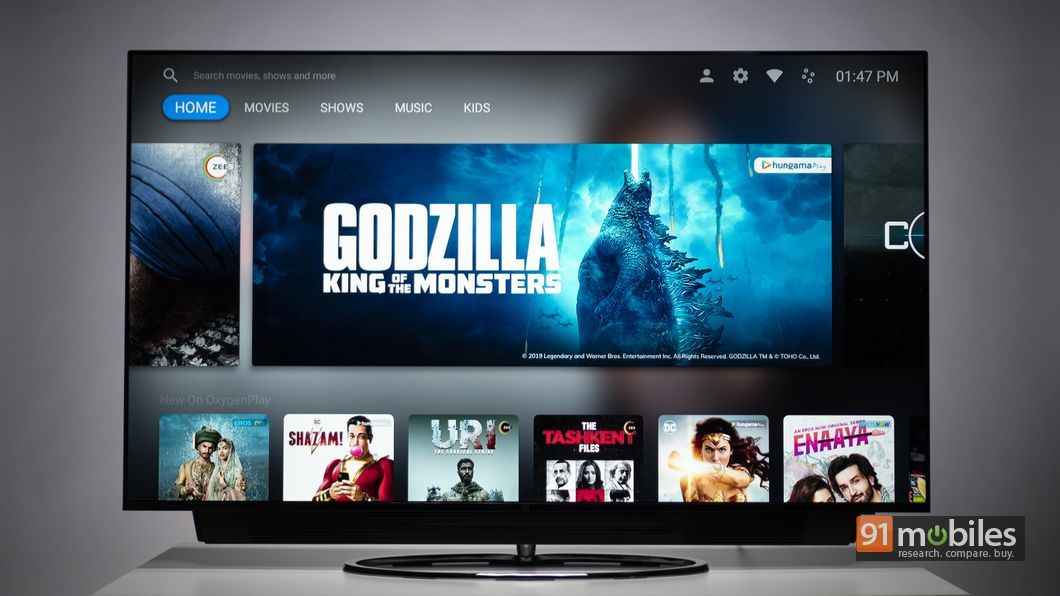 Outside of providing countless hours of content to its buyers, OnePlus has also worked on bettering the overall user experience by ironing out some of the most common pet peeves associated with a smart TV. To that extent, the company has developed the OnePlus Connect app, which allows you to use your phone as an input method for your TV among other things. I will be testing this feature thoroughly in my full review, so stay glued. 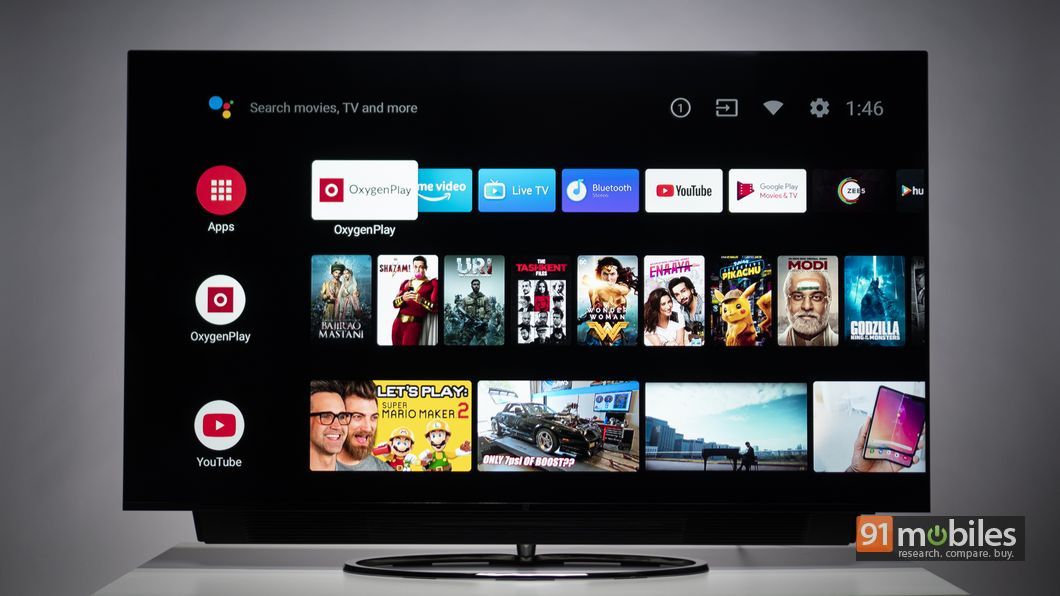 As for the pricing, the OnePlus TV Q1 Pro retails for Rs 99,990, which by no means is cheap or affordable. In fact, unlike the competition, OnePlus’ offering will squarely compete in the premium segment amidst proven manufacturers like Samsung and LG. It’ll be interesting to see whether this approach pans out in the company’s favour or not. But, if my first impressions are anything to go by, I think OnePlus has very little to worry about with the Q1 Pro.