91mobiles.com
Home News OnePlus TV remote gets Bluetooth certification; TV launch may not be too...

“The OnePlus TV remote with model number RC-001A has been certified to work on the Bluetooth 4.2 standard”

The OnePlus TV remote has just been certified by the Bluetooth SIG, which suggests that the brand’s first television is getting closer to launch. OnePlus TV was confirmed to be in development last year by the company, with India slated to be among the first countries getting the TV. Most recently, OnePlus India’s General Manager Vikas Agarwal, revealed to 91mobiles that a TV is the next big product in the company’s lineup for the Indian market. The OnePlus TV product is expected to be a premium offering with good features at a relatively affordable price point, just like the OnePlus smartphones. 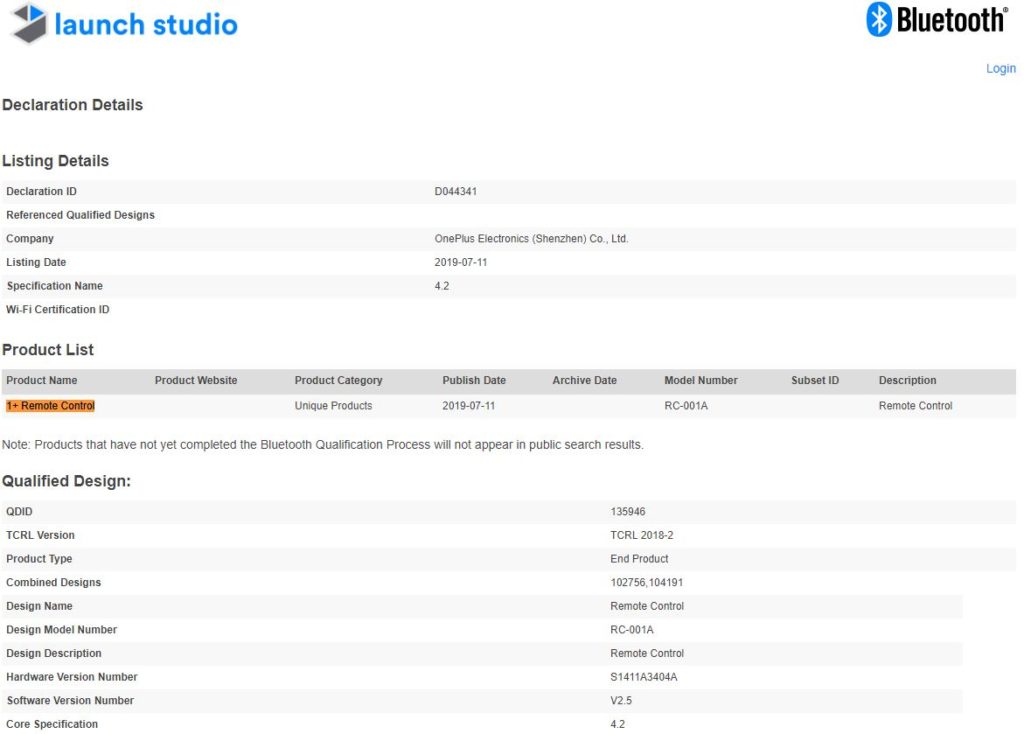 The OnePlus TV remote control with model number RC-001A has been certified by the Bluetooth SIG regulatory authority. The accessory will come with support Bluetooth 4.2. Unfortunately, the certification hasn’t revealed anything else about the features of the remote. However, we can expect the remote control will be AI-powered and come with a microphone for voice controls and a dedicated button for a digital assistant, possibly Google Assistant.

As for the OnePlus TV, back in April, Pete Lau said that the brand is working on a television that can communicate with a smartphone without any barrier to form a single, true ecosystem. With AI, the company imagines a TV that’s always ready and anticipates user needs to provide the relevant content as soon as the device is turned on. The phone maker’s TV will be able to learn from user habits and provide what is needed when it’s required. It is also said to come with popular streaming apps baked in, which is not a surprise since it is a smart TV.

According to the rumour-mill, the OnePlus TV could come with a 4K HDR panel. In India, just like the OnePlus smartphones, the television is expected to be available on the brand’s e-store and Amazon when it launches in the country. The company will be competing with Xiaomi’s Mi lineup of smart televisions with its offering.