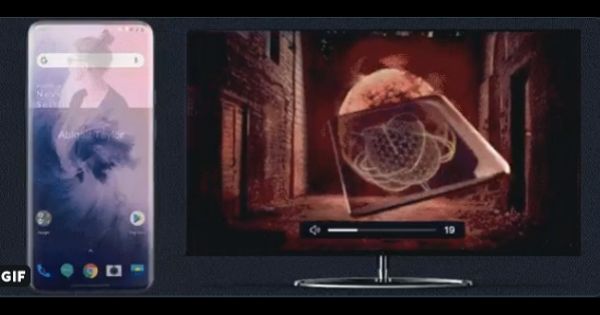 OnePlus CEO Pete Lau has posted a couple of new teasers that show some of the new features of the upcoming OnePlus TV. He also posted an image that showcases the TV’s stand design. Going by all the leaks so far, the OnePlus TV will be expensive and compete with high-end TV brands. OnePlus has revealed the rear design of the TV and the remote. Now, the new teaser shows the front design of the device, and it appears to have super-slim bezels. The new product will be unveiled during the OnePlus 7T series launch that’s scheduled for September 26th.

Automatically adjust the volume even before you've picked up your call. #OnePlusTV pic.twitter.com/YWl8HlZjyz

Last week, the company teased how smartphones can seamlessly connect to OnePlus TV and perform various actions. Basically, users will be fully able to control the TV using their smartphone. However, the software features will most likely be exclusive to OnePlus smartphones and baked into OxygenOS. The latest teasers reveal a new feature where the TV will automatically adjust the volume if the user receives a call on the connected smartphone.

Seamlessly switch between your favorite apps with one touch #OnePlusTV pic.twitter.com/vlGoFyJHVZ

This is a nice feature that will allow users to answer calls without being disturbed by the TV sound. Another teaser shows how OnePlus TV will allow easy switching between apps via the connected smartphone. A menu will appear on the phone, which will show a list of frequently used apps, and users can switch between these apps with a single tap. The switch appears to be seamless and fast on the TV as well.

No detail is too small, from top to bottom. #OnePlusTV pic.twitter.com/46xB5zg2Rh

Finally, the CEO also shared a picture of the OnePlus TV stand, which has an oval ring design and looks premium. The design of the stand is unique and will surely attract buyers. One of the teasers also shows the front design of the TV, which reveals slim bezels all around. The OnePlus TV will also be equipped with a Gamma Magic Colour picture processor, which will provide realistic colours on the high-end 4K QLED panel. It is expected to be powered by the MediaTek MT5670 SoC and will come with 3GB RAM/32GB storage.