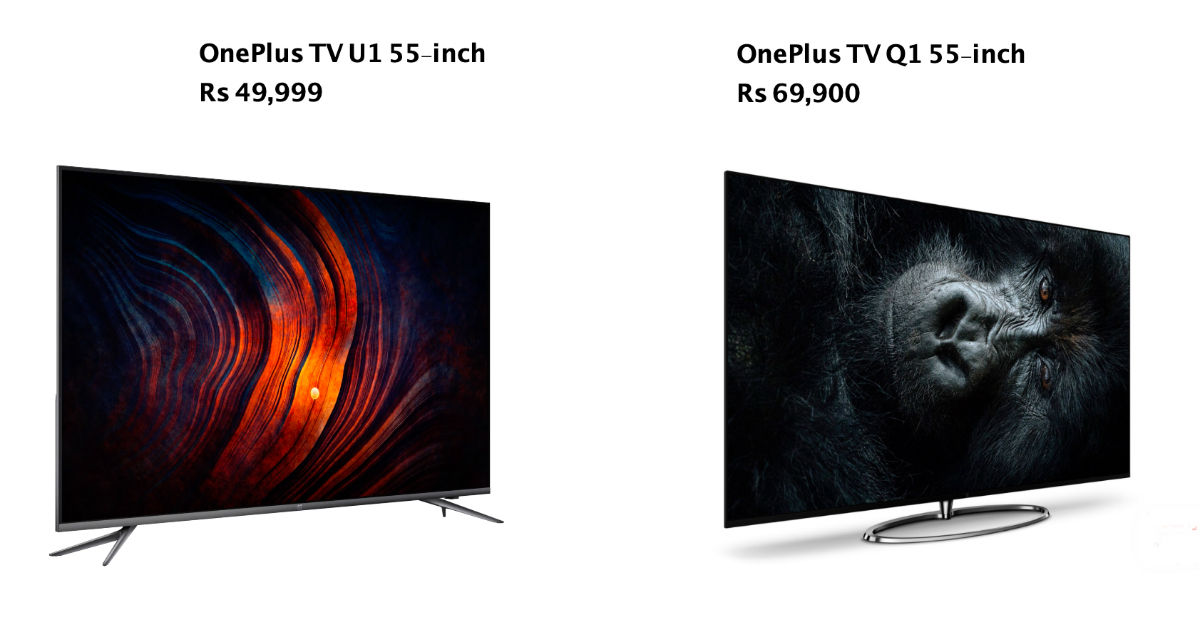 OnePlus on Thursday expanded its smart TV portfolio in India with the launch of the OnePlus TV U Series and Y Series. The new lineup includes three models – 32-inch, 43-inch and 55-inch – with prices ranging from Rs 12,999 to Rs 49,999. These prices are much more affordable than the OnePlus TV Q1 Series that the brand launched in September last year. To recall, the Q1 series includes two 55-inch models with 4K displays, with prices starting at Rs 69,899. So how different is the flagship OnePlus TV U1 from the OnePlus TV Q1? Well, the 55-inch OnePlus TV U Series model comes with high-end features and specifications such as a 4K display, Dolby Vision and Dolby Atmos, 30W speakers, among other things. Meanwhile, The OnePlus TV Q1 also features a 4K display, Dolby Vision and Dolby Atmos support, 50W speakers, and more.

Here’s a closer look at how the two TVs compare in terms of India prices, specifications, and features:

In terms of design, both the 55-inch OnePlus TV U series and OnePlus TV Q1 look premium. The company has used high-end materials and has made sure the smart TVs offer near bezel-less displays and a clean and minimalist design. The OnePlus TV Q1 model comes with a unique circular stand, but this is not included in the box and will need to be bought separately for Rs 2,990.

The entire back of the Q1 model has a kevlar finish, whereas the 55-inch OnePlus TV U series has the carbon fibre design only on the bottom mound while the rest of the back is flat and clear. The new OnePlus TV (U series) comes with a slim form factor, measuring just 6.9mm in thickness and a thin aluminium chassis. Some would say that The OnePlus U Series 55-inch model looks more premium and attractive than the Q1 model.

Coming to the display, both the OnePlus TVs sport a 55-inch screen with 4K resolution. However, the Q1 series uses a QLED panel that delivers punchier colours compared to a typical LED panel. The OnePlus TV U series model, on the other hand, uses an LED panel, which also delivers vibrant colours and good black levels based on our initial impressions. Both displays are backed by features like Noise Reduction, Dynamic Contrast, Dolby Vision, HDR 10, and HDR10+.

Both the OnePlus TVs run on Android TV OS with a thin layer of OnePlus’ own skin on top. The Q1 series did not ship with Netflix support out of the box, but the company added the app support via a software update. The U1 series comes with Netflix pre-loaded as well as other OTT platforms like Hotstar, Prime Video, and more. Both the TVs also come with Chromecast built-in, Google Assitant, Oxygen Play, and OnePlus Connect, which allows you to use your phone as a remote.

As for connectivity, the OnePlus TV Q1 comes with more ports compared to the U1 model. You get four HDMI2 ports, one AV input, three USB ports, and an Ethernet port on the Q1 series model. The OnePlus TV U1 offers three HDMI1 ports, one AV input, two USB ports, and an Ethernet port. Both TVs sport 2.4GHz and 5GHz Wi-Fi bands as well as Bluetooth 5.0.