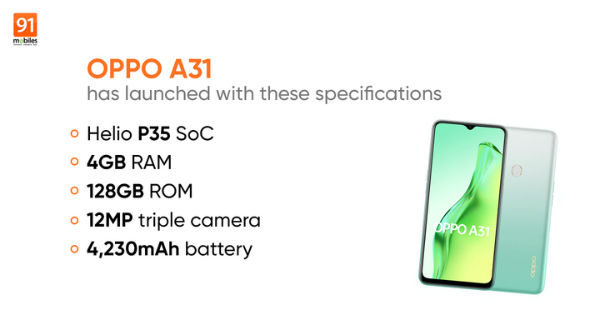 OPPO A31 smartphone has been silently launched in Indonesia after rumours and leaks. The handset rocks triple rear cameras alongside a traditional fingerprint sensor for security and two-tone gradient design with a polycarbonate build. There is a waterdrop notch on the front to accommodate the selfie snapper, the volume rocker is on the left spine, while the power button is placed on the right side. The handset boots Android 9.0 Pie with ColorOS 6.0.1 custom skin on top and weighs 180 grams.

The OPPO A31 is priced at RP 2,599 (around Rs 13,600) and comes in Mystic Black and Fantasy White colour options. The handset is already on sale in Indonesia.

In terms of optics, the OPPO A31 has a triple camera setup comprising of a 12MP (f/1.8) primary wide-angle sensor with PDAF, a 2MP Macro Lens, a 2MP (f/2.4) depth unit for portrait shots and an LED flash. The rear cameras can record 1080p videos. On the front, there is an 8MP snapper for selfies and video chats. OPPO A31 connectivity features include 4G LTE, dual-band Wi-Fi a/b/g/n/ac, Bluetooth 5.0, GPS, microUSB port, and a 3.5mm audio jack. A 4,230mAh battery fuels the phone.