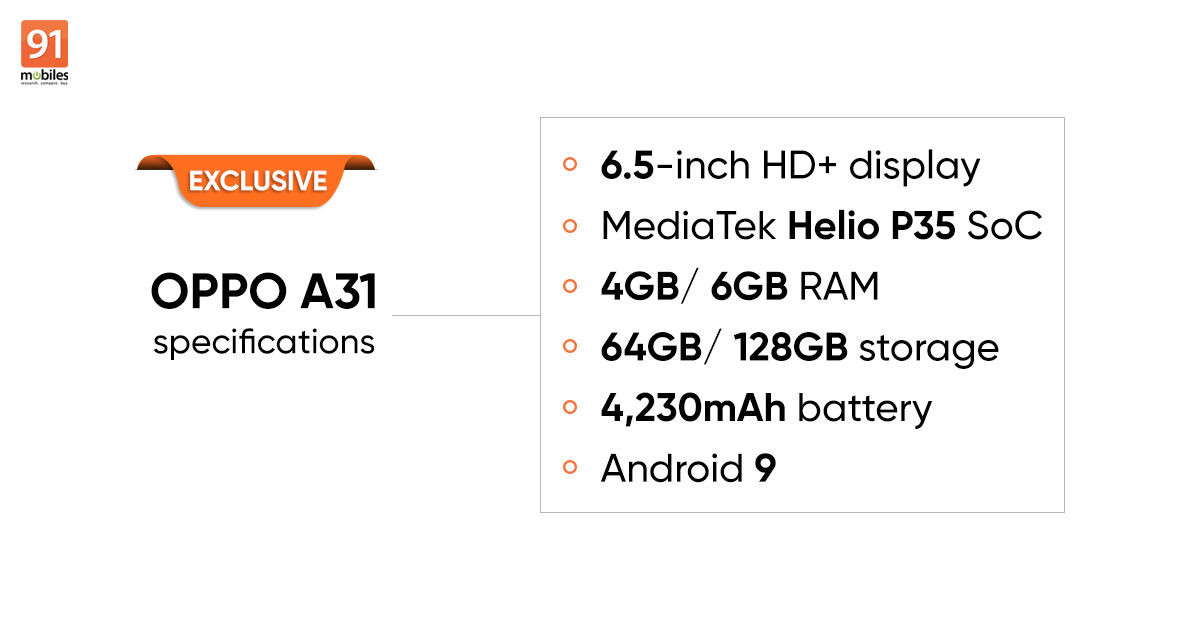 “OPPO A31 will be a mid-range smartphone with key specs that include MediaTek Helio P35 chipset, triple camera setup, and 6.5-inch HD+ display”

OPPO A31 is reportedly in the works and the smartphone could launch soon. The A31 was spotted on the Bluetooth SIG certification site last month with a few specs revealed such as a 4,230mAh battery and 6.5-inch display. 91mobiles has learned some key OPPO A31 specifications from a reliable tipster. The latest leak reiterates that the mid-range smartphone will indeed come with a 6.5-inch display and 4,230mAh battery. 91mobiles has also received a clear render of the OPPO A31, which reveals that the phone will come with a waterdrop notch, triple camera setup and a rear-mounted fingerprint sensor.

In addition to the display and battery, tipster Ishan Agarwal has told 91mobiles that the OPPO A31 specifications will also include a MediaTek P35 SoC chipset, triple cameras and that the smartphone will ship with Android 9 rather than Android 10. Interestingly, a recent OPPO A31 Geekbench listing revealed Android 10 software and Helio P90 SoC. As per the latest leak, it looks like this won’t be case. 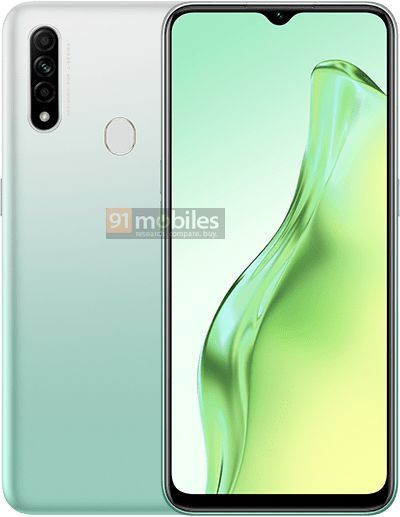 Starting with the display of the device, the OPPO A31 will feature a 6.5-inch HD+ display. The device will measure 163.9×75.5×8.3mm and will weigh in at 180 grams. Coming to the color variants of the OPPO A31, the device will be available in three color options – Mystery Black, Fantasy White, and Lake Green. Under the hood, the smartphone will be powered by a MediaTek Helio P35 processor, which will come paired with either 4GB/6GB of RAM and 64GB/128GB of onboard storage. It is unclear as to whether or not there will be provision for storage expansion. The OPPO A31 will house a 4,230mAh battery, and there is no word yet on fast charging support.

As of now, this is all we know about the OPPO A31 smartphone, but we will keep you posted on the same, should we receive any intel in the future. Meanwhile, OPPO is gearing up for the launch of its OPPO Reno 3 Pro smartphone in India. Yesterday, 91mobiles learned that the Oppo Reno 3 Pro would be accompanied by the OPPO Enco Free True wireless buds in India. In case you are curious to know more about that, you can head to our previous coverage of the same.