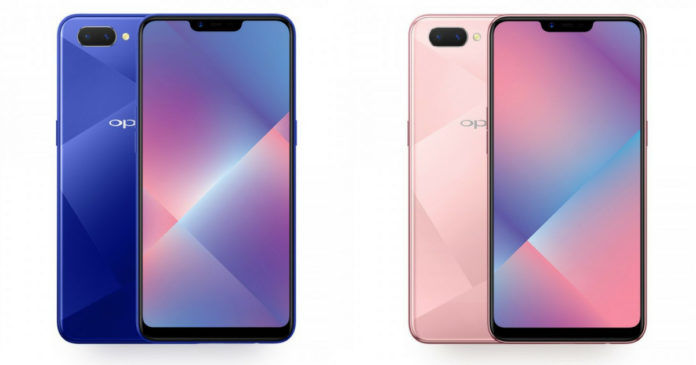 BBK Electronics-owned OPPO could unveil a new A series smartphone in India in the coming days. The handset is allegedly dubbed the OPPO A5s and is expected to be an enhanced version of the OPPO A5 that was launched with the Snapdragon 450 SoC last year. Ahead of the launch, MySmartPrice has got hold of a render and the complete spec sheet of the upcoming OPPO A5s. 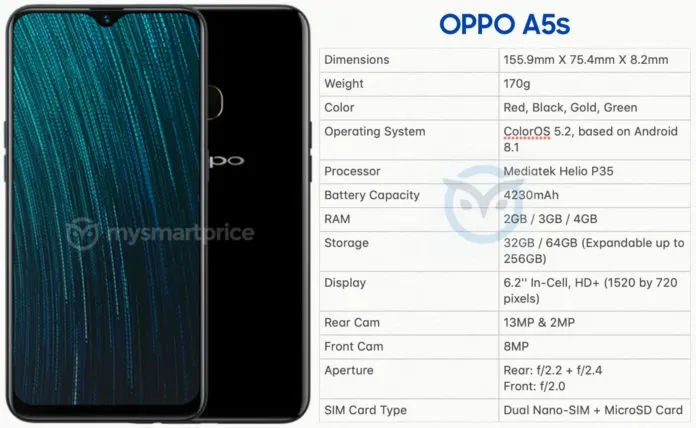 As seen from the leaked image, the OPPO A5s will boast of an edge-to-edge display with a waterdrop notch above the screen that will be home to the selfie camera. The screen size is reported to be 6.2-inch that bears HD+ (720 x 1,440p) resolution. At its heart will lie MediaTek’s Helio P35 chipset paired with 2GB/ 3GB/ 4GB of RAM and 32GB/ 64GB of native storage that is said to be expandable up to 256GB using a microSD card.

In the camera department, the OPPO A5s is tipped to arrive with dual rear cameras, which are expected to be most likely aligned vertically at the top-left corner. The setup will reportedly include a 13-megapixel primary sensor and a 2-megapixel secondary shooter with f/2.2 and f/2.4 aperture lenses respectively. The front camera is said to get an 8-megapixel f/2.0 shooter. Powering device will be a 4,230mAh battery, possibly with normal charging.

On the software front, the OPPO A5s is said to boot ColorOS 5.2 based on the slightly dated Android 8.1 Oreo version. The photo shows that the phone will have a rear-mounted fingerprint sensor. The device will measure 155.9mm x 75.4mm x 8.mm and weigh 170g. The pricing and availability of the OPPO A5s remain a mystery at the moment. However, it is being reported that the handset will come in four colour options Red, Black, Gold, Green.