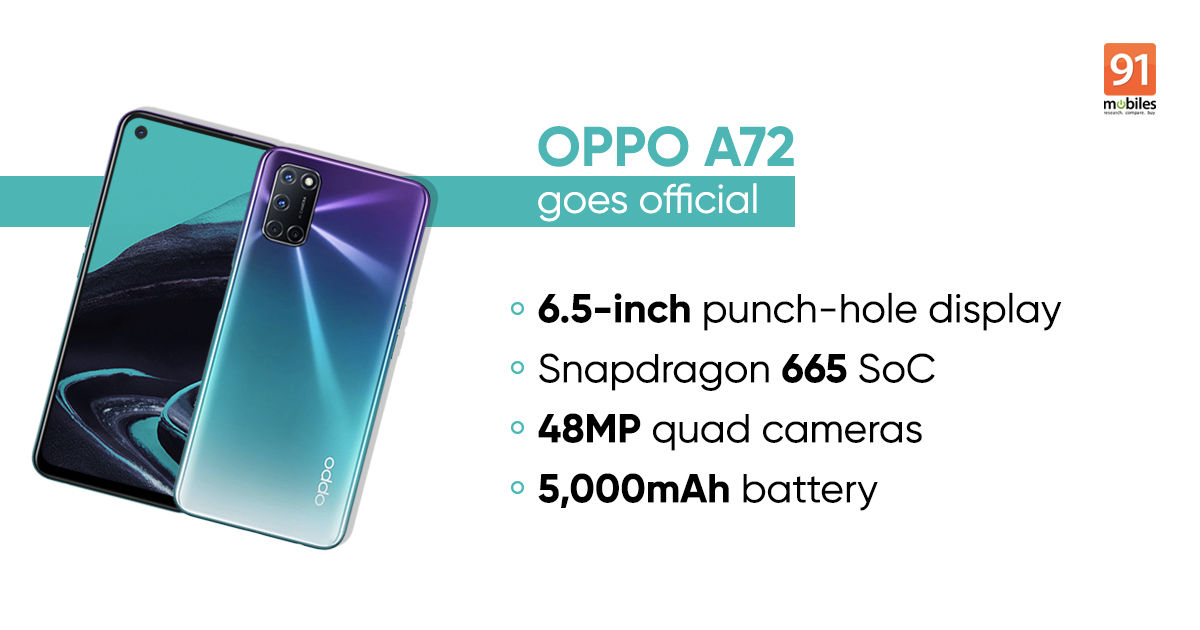 OPPO has introduced a new A-series smartphone, called OPPO A72. The handset bridges the gap between the recently launched OPPO A52 and OPPO A92s smartphones. The OPPO A72 shares the punch-hole display, chipset, and 5,000mAh battery cell with the A52, but packs an upgraded camera setup. It has a 48MP primary camera, compared with 12MP on the A52, while the front camera gets a 16MP shooter instead of an 8MP sensor for selfies and video calling. The OPPO A72 comes pre-loaded with ColorOS 7 atop Android 10 out of the box and features a side-mounted fingerprint scanner for security.

The OPPO A72 specifications include a 6.5-inch punch-hole display with Full-HD+ resolution. The handset is powered by Qualcomm’s mid-range Snapdragon 665 SoC coupled with 4GB of RAM and 128GB storage onboard, which can be further expandable using a microSD card. For photography, the A72 packs a quad camera setup with 48MP primary sensor, an 8MP ultrawide sensor, 2MP macro sensor, and a 2MP depth unit. The front camera of the phone features a 16MP shooter in a punch-hole at the top-left corner of the display.

A 5,000mAh battery with 18W fast charging tech fuels the handset, while Android 10-based ColorOS 7 takes care of its software side of things. The fingerprint scanner is mounted underneath the power button on the right spine. Lastly, the phone has standard connectivity options.

The OPPO A72 price and availability details haven’t been announced yet. However, it’s being reported that the phone will make its global debut soon. The OPPO A72 is said to break cover in Europe alongside the OPPO A52, which has been priced at RMB 1,599 (~Rs 17,325) for the sole 8GB RAM and 128GB storage variant.