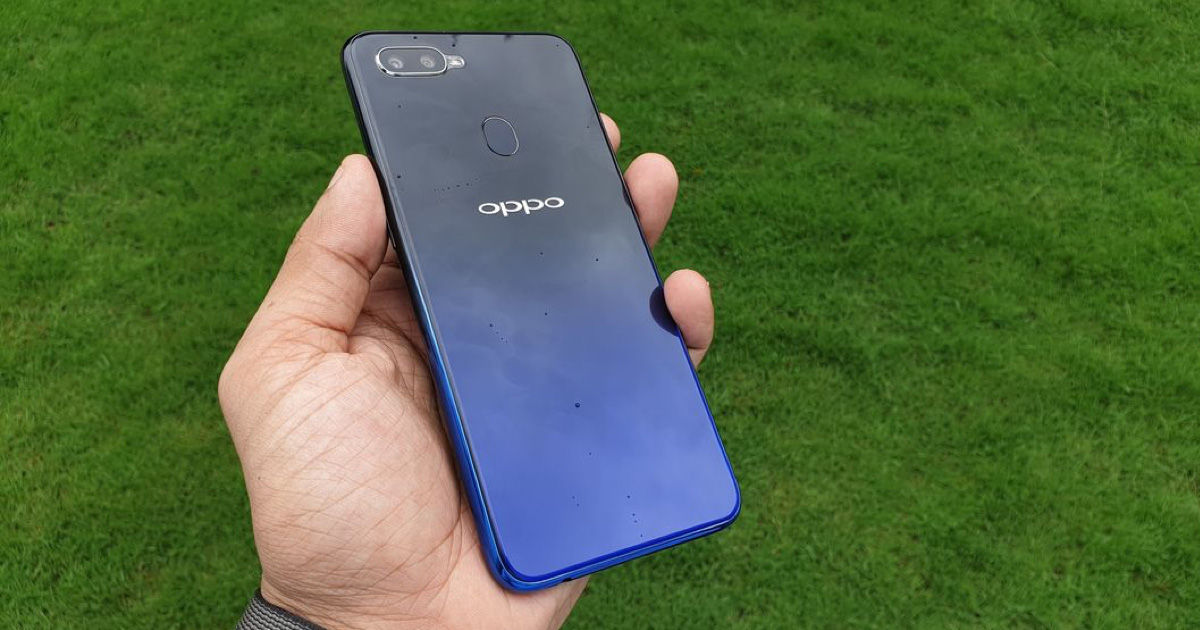 Did you know that OPPO, OnePlus, and Vivo are all subsidiaries of the Chinese multinational firm, BBK Electronics? Although all the three brands have the same parent company, their offerings are quite different from one another. While OnePlus’ smartphones aim to offer blazingly-fast performance at a lesser price than premium flagships, both OPPO and Vivo offer affordable smartphones with the focus on camera capabilities. In fact, OPPO touts itself as the Selfie Expert and equips its smartphones with the class-leading front camera to satiate the needs of the Gen Z. Today, OPPO unveiled its latest flagship in the form of the OPPO F9 Pro — the successor to the F7 (review) — at an event held in Mumbai. I managed to get up close with the smartphone and here are my first impressions of the same. 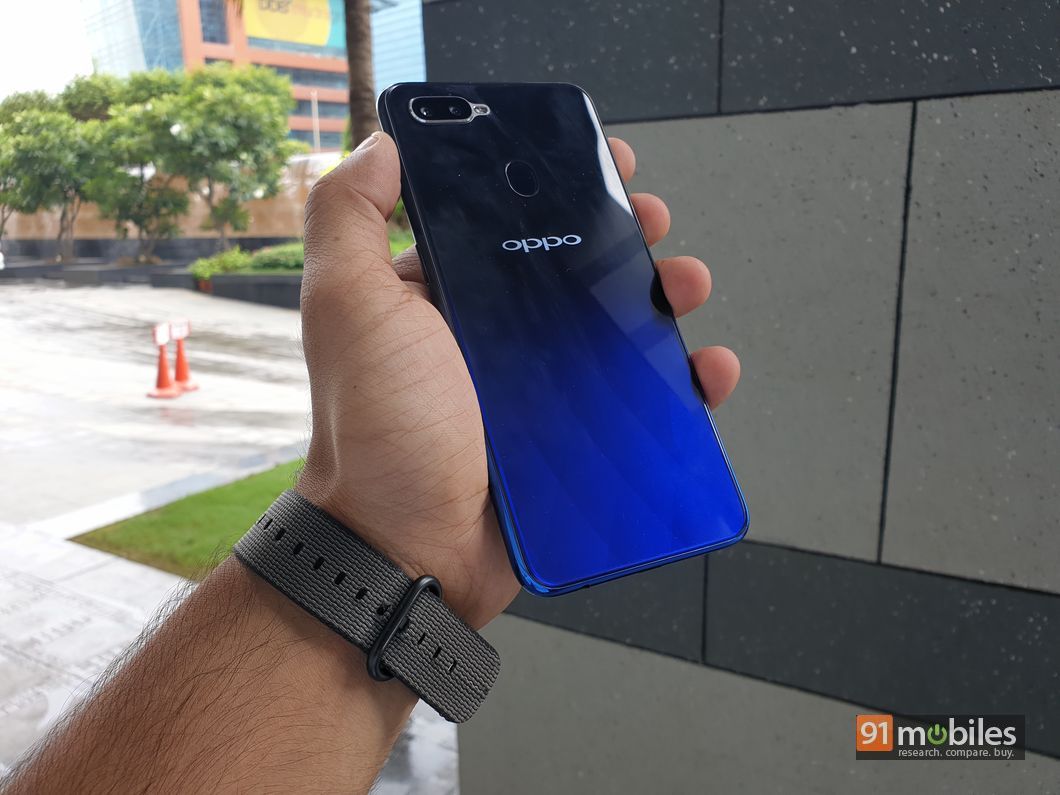 As far as looks are concerned, the OPPO F9 Pro is definitely a showstopper. The smartphone comes in an attractive glass finish on the back which lends it a premium in-hand feel. The looks of the smartphone are further accentuated by the handset’s stunning two-tone Twilight Blue colourway, which showcases a diamond-cut pattern at the rear when the light hits the surface at a certain angle. That being said, the smartphone can also be picked up with a Sunshine Red or Starry Purple paint job, if that suits your personality. 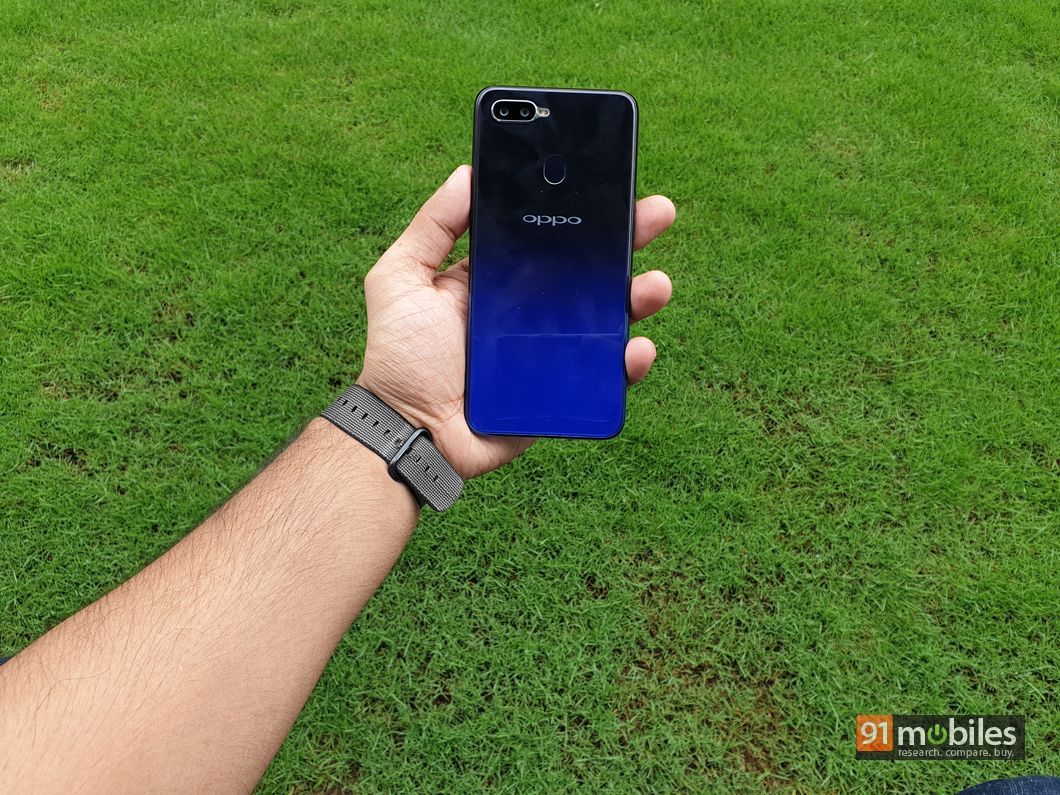 Despite packing a large display, the OPPO F9 Pro can be comfortably managed with just one hand as the smartphone ships with rather sleek bezels. The handset felt quite light in the hand and boasts a sleek girth too, allowing you to comfortably carry it around in the pocket of your jeans without creating a huge bulge. On the flip side, the phone’s back panel attracts a lot of fingerprints and smudges, so you will have to wipe it down every now and then to keep it squeaky clean or you can use the device with a case.

As far as the placement of the ports and buttons are concerned, you’ll find the power toggle on the smartphone’s right fascia. The volume rocker as well as the dual-SIM tray, have been positioned on the left spine. Interestingly, OPPO has opted to furnish the F9 Pro with a dedicated microSD card slot, so you won’t have to choose between expanding storage or using dual-SIM cards. At the back, you’ll find a fingerprint sensor which worked quite well during my brief time with the device. OPPO also gives you the option to unlock the smartphone biometrically by means of facial recognition, which worked just as well. 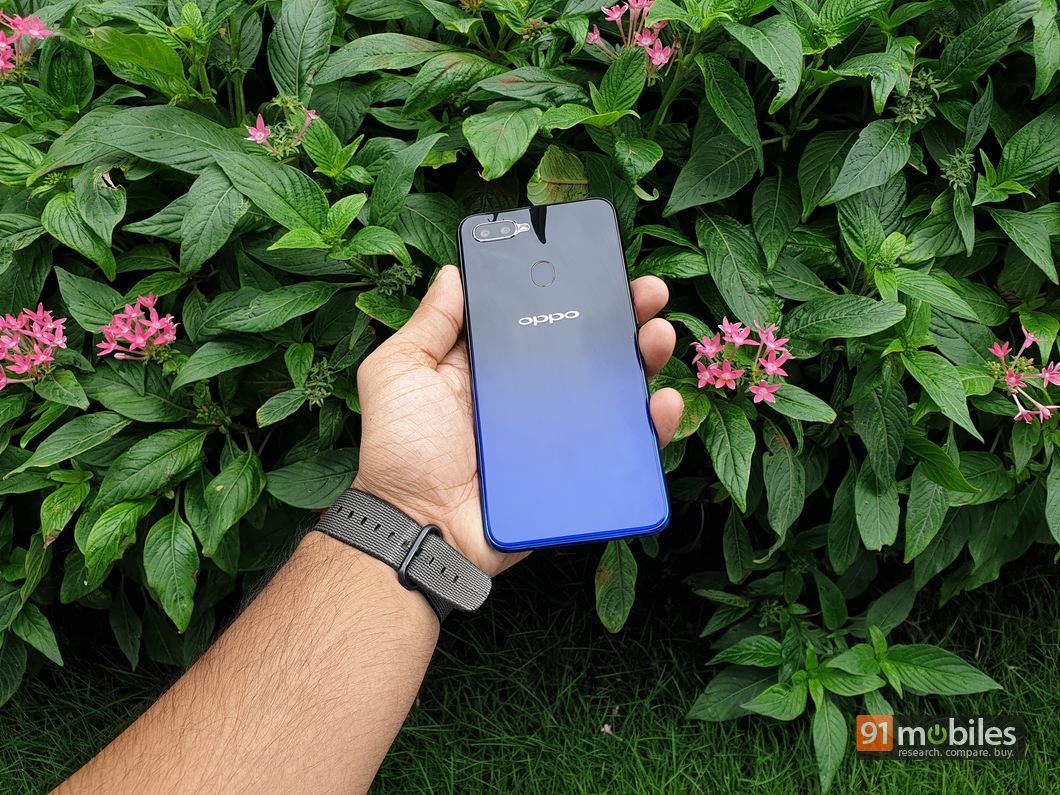 Moving on, the bottom of the smartphone is reserved for the headphone jack, a microUSB port as well as a speaker grill. While I am bummed that the handset doesn’t ship with a USB Type-C port, OPPO has bundled its super-fast VOOC charger with the device, which is great. 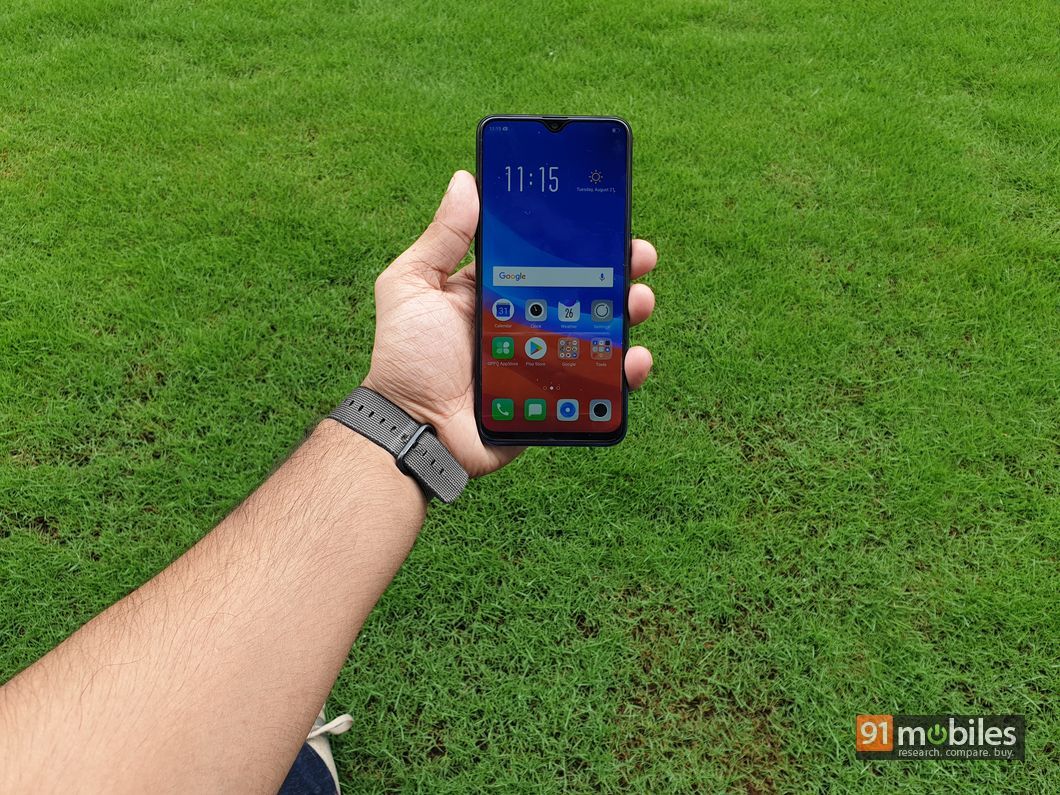 As I mentioned previously, the F9 Pro comes with sleek bezels which surrounds all four sides of the smartphone’s display. To maximise the amount of screen available to the end user, the brand has opted for a notch-based display. Now, before you go ‘ughh’, hear me out. The notch on OPPO’s latest is unlike any other as it has a water droplet-like look to it, which means it doesn’t take a huge chunk of the smartphone’s display. Instead, the cut-out is present at the center to hold the selfie snapper, similar to what you might’ve seen on the Essential phone. Quite honestly, I find the notch on the OPPO F9 Pro rather attractive. 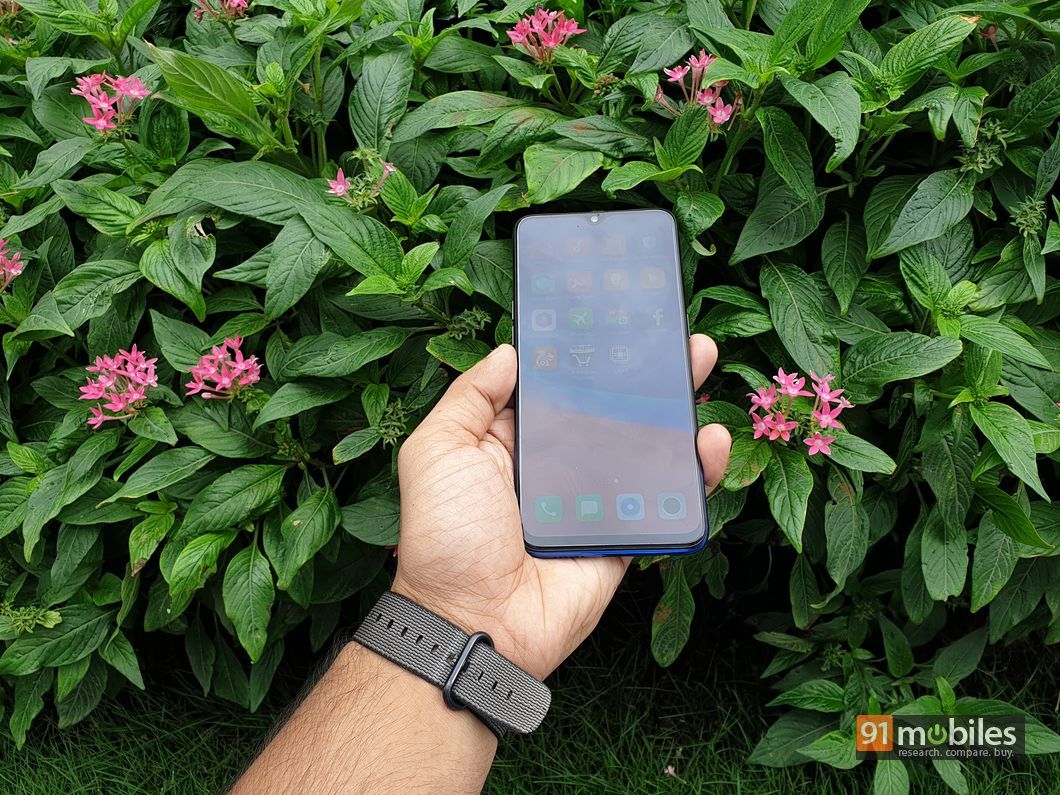 Notch aside, the display on the F9 Pro is fantastic. The handset makes use of a 6.3-inch FHD+ display which gets adequately bright and has impressive viewing angles too. The panel exhibits punchy colours, which should make it a great phone to consume multimedia. 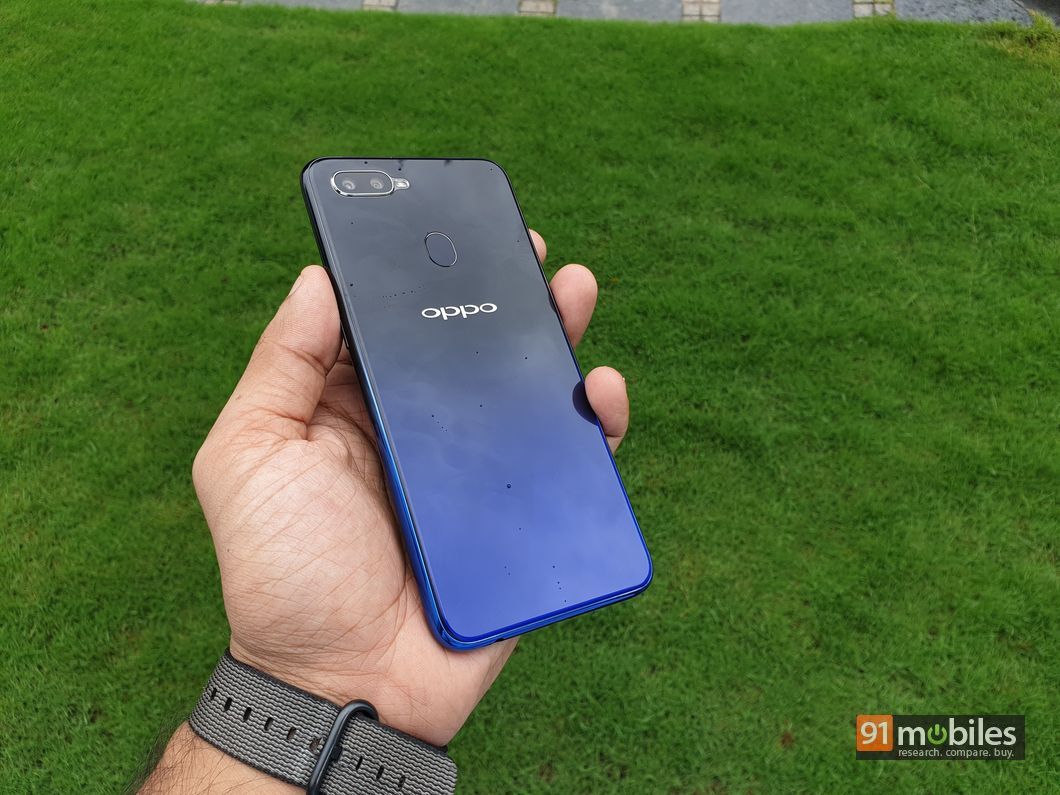 In terms of specs, the F9 Pro is backed by an Helio P60 octa-core processor which works alongside 6GB of RAM and 128GB of built-in storage. It must be noted that the device is also available with 4GB RAM and 64GB of memory onboard with the OPPO F9. During my initial stint with the smartphone, I didn’t come across any instances of stutters or jagged UI animations. The phone’s processor managed to render everything smoothly, and jumps in and out of applications in a jiffy too. Rest assured, we will be putting the device through its paces in our full review, so stay tuned for that.

Software-wise, the OPPO F9 Pro runs Android Oreo v8.1 with a skin of ColorOS v5.2 on top. The skin is a far cry from stock Android but comes with a bunch of useful features. For instance, similar to the Samsung Galaxy Note 9 (review), the smartphone also comes with ‘Smart Sidebar’, which can be accessed by swiping inwards from the device’s right edge to give users quick access to their apps and other useful shortcuts.

The OPPO F9 Pro ships with a dual-camera setup at the back, comprising a pair of 16MP and 2MP shooters. The handset comes with a 25MP selfie shooter too, which is backed by AI smarts to assist users in taking the most photogenic portrait of themselves. While I couldn’t test the cameras of the smartphone fully, I’ve attached a few sample shots above to give you a peek at the phone’s imaging prowess. 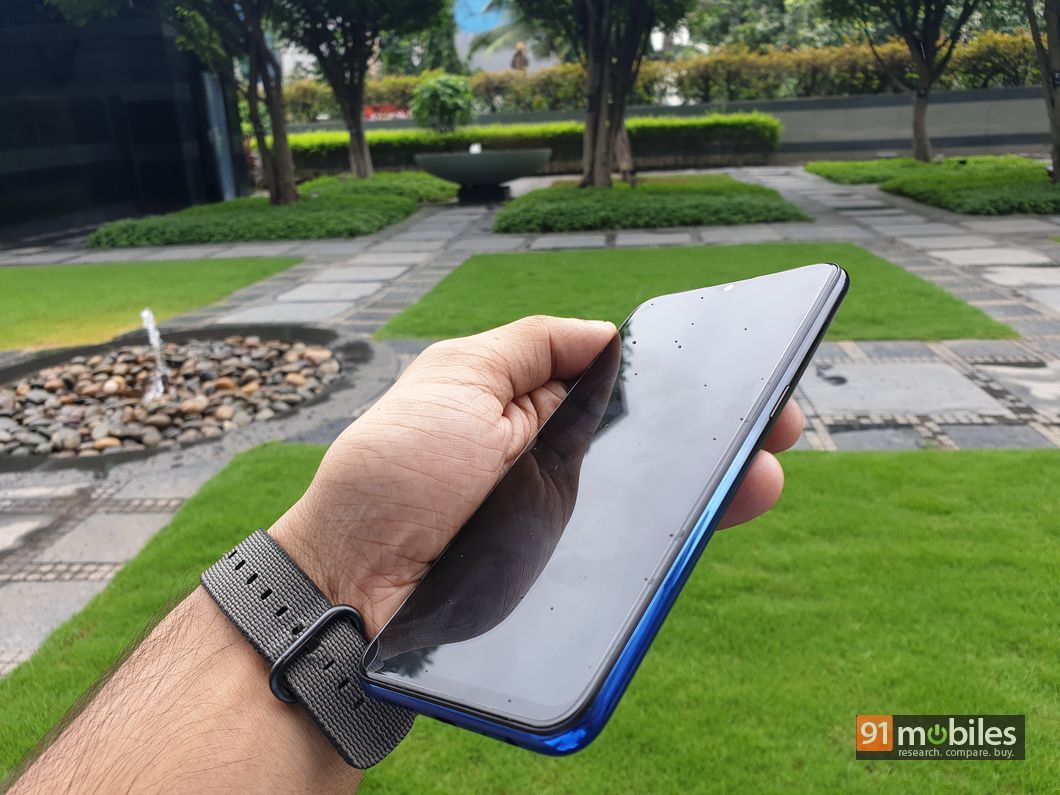 The OPPO F9 Pro ships with a 3,500mAh battery which supports the company’s famed VOOC charging. The company claims that buyers can get up to two hours of talk time with just a five-minute top up. The handset has been priced at Rs 23,999 and will be up for grabs from leading e-commerce platforms. For the price, the smartphone will go up against some heavy-hitters, such as the Nokia 7 Plus (review) and soon-to-be-launched POCO F1. To know whether the OPPO F9 Pro can stand its own, stay tuned for our full review of the smartphone, coming your way soon.