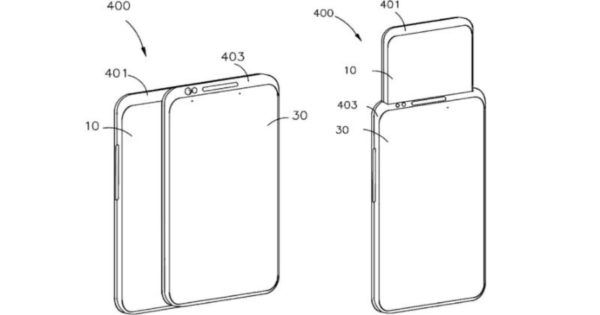 A new OPPO patent application has surfaced online and showcases a pop-up secondary display coming out of the first screen, which is truly one of a kind. WIPO has published the patent from Guangdong Oppo Mobile Telecommunications and the description reads “For an Electronic device with the display panel,” and was filed back in April 2018. The company seems to have filed multiple smartphone patents that have two displays. However, they are not foldable, instead, they feature a sliding secondary display.

While we have seen phones with pop-up selfie cameras, OPPO is taking this up a notch by attaching a secondary sliding display. The pop-up display is slightly narrower and looks to sport a smaller panel. It is unclear what the secondary display is capable of doing as it is just in the patent stage. Despite the sliding panel, the front camera and sensors are placed within the narrow top bezel giving users two complete displays with no notches or punch holes.

Another patent design reveals a smartphone with slider secondary display but from left. It uses a guide rail mechanism and the selfie shooter and sensors are present on the narrow top bezels as well. This isn’t a fresh design as we have seen phones like LG GW520 and the Nokia 6760 in the past but with a slider keyboard, instead. OPPO might use the secondary sliding display as a keyboard for playing games. As these are just patents filed by OPPO a while ago, there’s no way to tell if these design will ever become a reality. Currently, the brand is busy prepping for the launch of Reno brand smartphones which is set for April 10th. Stay tuned to know more details.