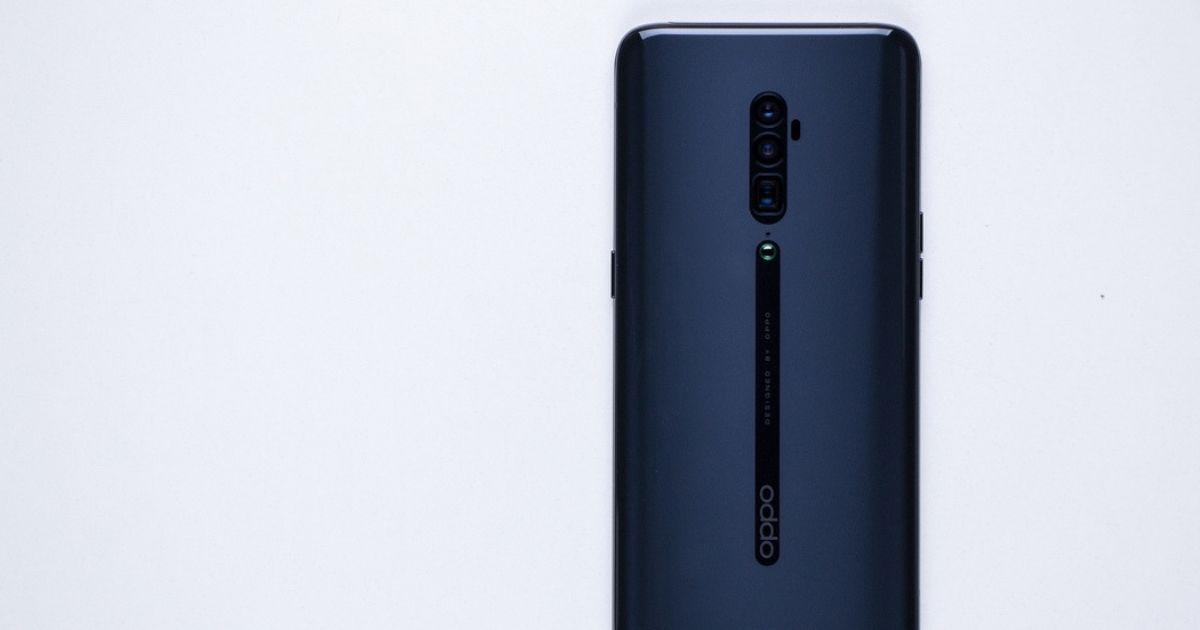 When the first leaked render of the OPPO Reno surfaced, my reaction after seeing the selfie camera was one of sheer amazement. In fact, I remember wondering if the image was a hoax, especially after some reports suggested the leaked render was an April Fool’s prank, which seemed more legit. However, come April 10th, OPPO went ahead and launched the Reno and the Reno 10x Zoom Edition in China. And, the smartphones are exactly as we had seen in the leaked renders! It was now everyone’s turn to marvel at the engineering and design feat that OPPO managed to achieve with the Reno series. After a lot of anticipation and wait, the brand has finally launched the Reno duo in India today. We received the Reno 10x Zoom Edition variant from the brand and here’s what I have to say after a short stint with the phone. 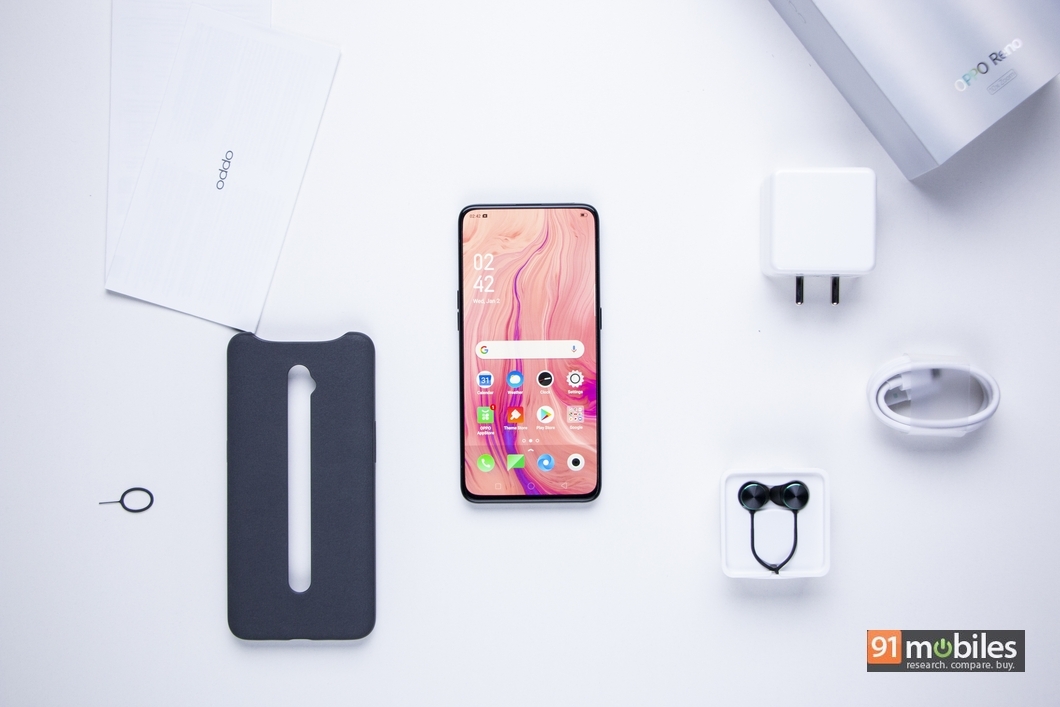 I know you’re excited about the Reno handset, but let’s quickly get over the packaging first. When I first saw the box of the handset, I was taken aback by how long the box is. Inside the packaging, you will get the OPPO Reno, a custom case with a cutout on top for the elevating shark-fin selfie camera, a USB Type-C cable, a wall charger, SIM ejector tool and a pair of in-ear earphones (Thank you OPPO!). Now let’s move on to the showstopper of this first impressions article, which is the OPPO Reno 10x Zoom Edition. 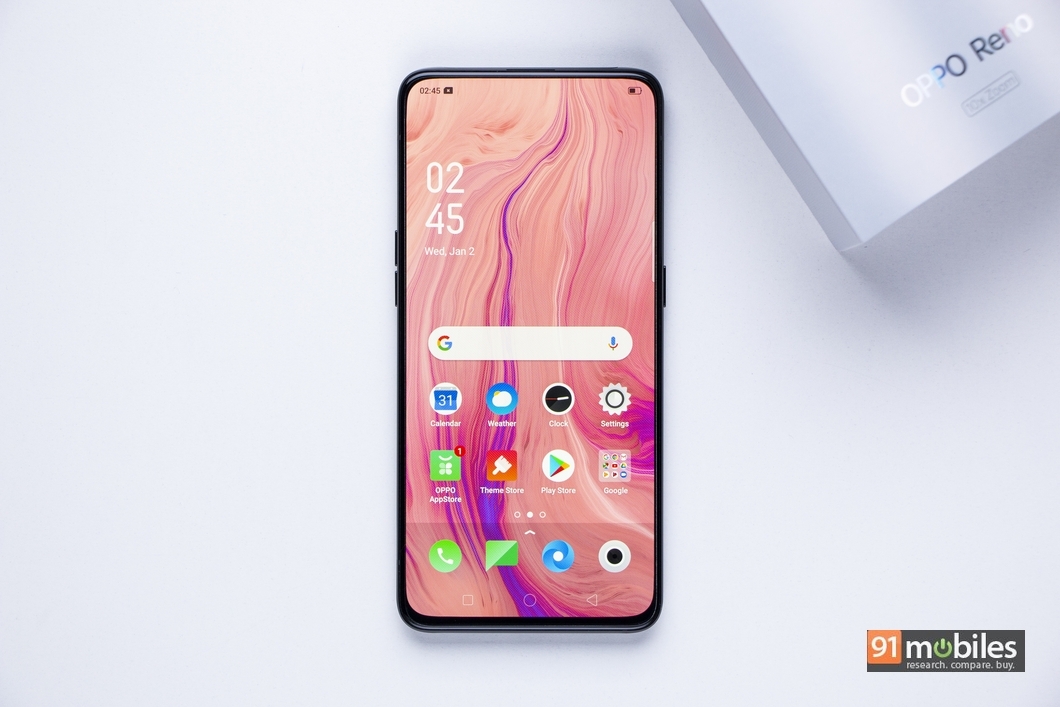 Let me apologise in advance if I seem to go on and on about the design of the OPPO Reno 10x Zoom Edition. However, there are one too many nuances to the design of the smartphone that are more utilitarian in nature than aesthetic, so bear with me. When you first pick up the Reno, you can’t help but notice the heft that the phone clad in glass and metal has. However, the even weight distribution and curved glass back panel of the phone makes it very ergonomic. Speaking of the back panel, it’s one flat slab of a glass with the triple camera module also resting below the panel. In the era of slim smartphones with protruding camera modules, the OPPO Reno 10x Zoom Edition feels more premium, sleek (9.3mm) and sexy with its flat back (no puns intended). What makes this feat even more impressive is that the camera packs a 16-160mm full focal periscope style lens and is still flush with the back panel. OPPO is offering the handset in Ocean Green and Jet Black hues, and I have the latter in my hand. 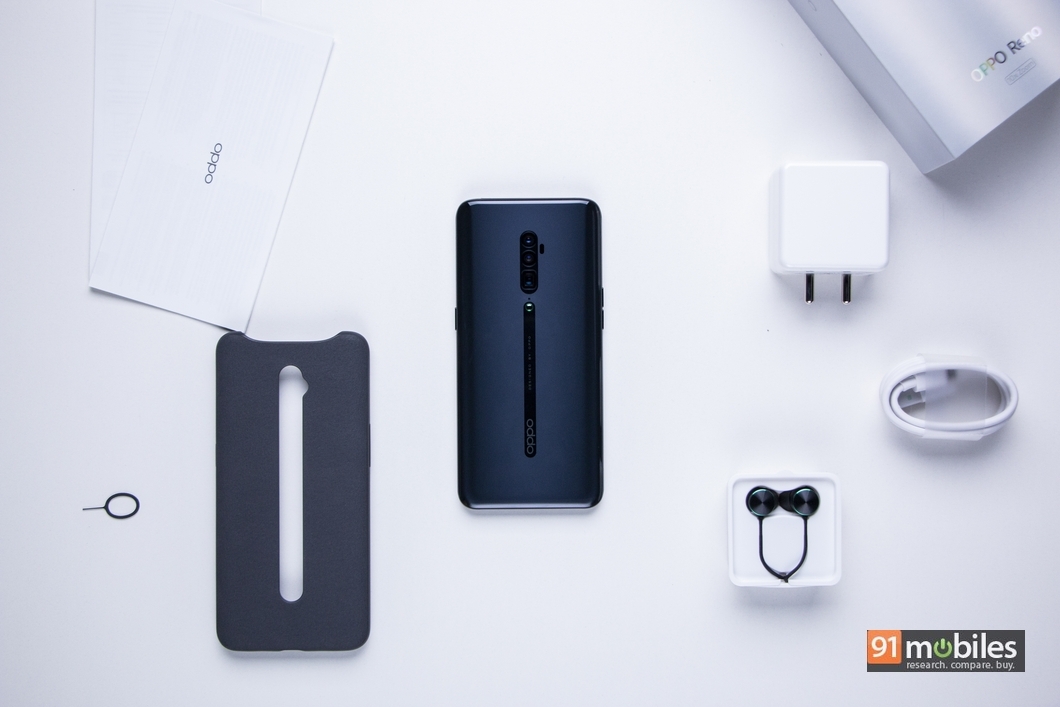 However, there is a very tiny circular reflective element on top of the strip displaying the “Designed by OPPO” text and right below the camera module, which juts out a little bit. At first, I thought this could be an ode to the mirror finished rectangular bits on the phones from the ’90s, which let users capture selfies using the rear camera by seeing their reflection in it. The same on the Reno is too tiny to serve that purpose, but then realisation dawned when I placed the phone down on a surface. OPPO has strategically placed the protruding bit slightly north of the centre. This way when the phone is placed down, the weight distribution shifts to the bottom and lifts the top portion with the camera module along with it off the surface. A brilliant detail which prevents the flat camera module from getting scratched.

Moving on to the sides, you will find the volume buttons and power button on the left and right edges, respectively. The power button has a distinct green highlight to give it a unique character. The entire length of the top edge is taken up by the shark-fin selfie camera module (I will talk more about it in the camera section), whereas at the bottom, you will find the speaker grille, a USB Type-C port as well as the SIM slot. The shark-fin module houses the earpiece and the selfie camera on the front, and the LED flash for the rear camera on the back. There’s no 3.55mm headset socket though.

The SIM tray on the smartphone deserves a special mention here because while it’s a hybrid SIM tray, it’s the size of a nano SIM. OPPO has managed this feat by placing the sim slots on the back and front of the tray. While SIM 1 slot only takes a nano-SIM, the SIM 2 slot is designed to take either a microSD card or a nano-SIM at a time. Speaking of the in-screen fingerprint scanner, the Reno 10x Zoom Edition uses the latest generation module, which is said to be 28.5 percent faster than the previous generations, and I can vouch for this.

The display on the OPPO Reno 10x Zoom Edition is a 6.6-inch AMOLED screen bearing a resolution of 1,080 x 2,340 pixels and a layer of Corning’s Gorilla Glass 6 on top. While there’s a very slim slit on the top for the earpiece, the display is practically bezel-less. There’s a tiny chin at the bottom but it’s even smaller than the  OnePlus 7 Pro (review) (as you can see in the image above), which has a similar fascia. The panoramic display on the OPPO Reno 10x Zoom Edition offers an impressive 93.1 percent screen-to-body ratio, which definitely translates into an immersive viewing experience while streaming videos, though it might prompt ghost touches while gaming. Apart from this, the display on the smartphone offered punchy colours, sharp text and ample brightness to be legible in the direct sunlight. I didn’t find any issues with the viewing angles as well except for a very subtle colour shift. 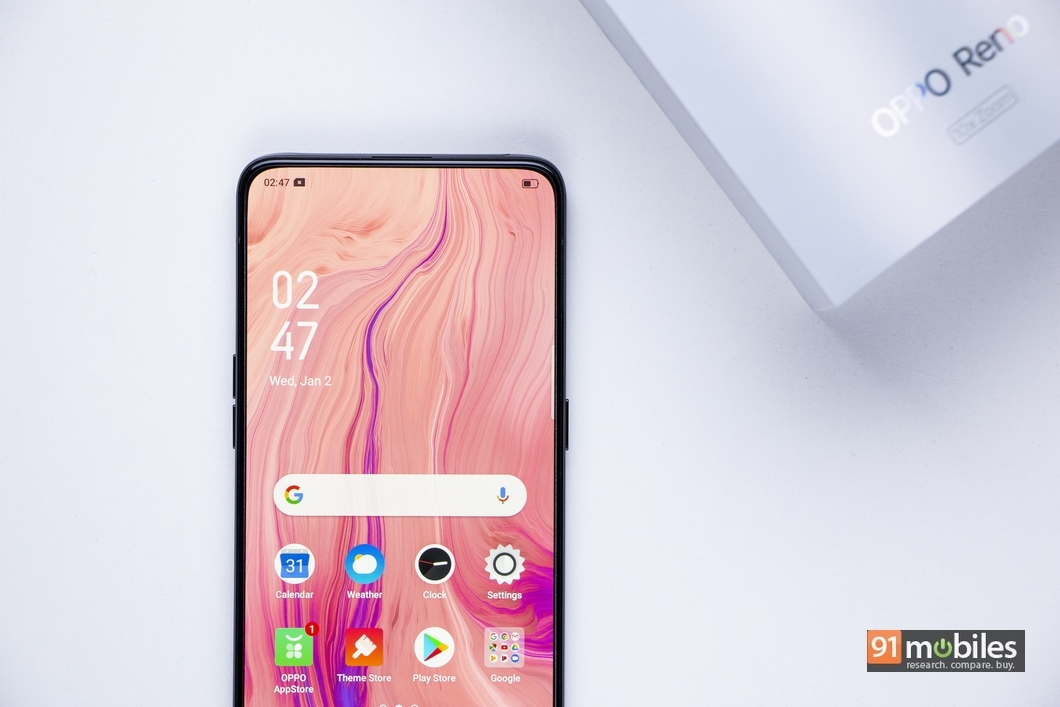 As a flagship smartphone from the brand, the OPPO Reno 10x Zoom Edition comes rocking the heavyweight Qualcomm Snapdragon 855 SoC at its core. The chipset needs no introduction as it has already made an appearance on several flagships this year and has shattered the benchmarking records. Needless to say, OPPO’s latest can handle anything that’s thrown at it and my experience was not any different. I will reserve the detailed introspection of the performance for the complete review, which is a work in progress as of writing this piece. The smartphone is being offered in two variants – 6GB + 128GB and  8GB + 256GB. I have the latter and it offered around 215GB of storage right out of the box.

On the software front, the smartphone runs ColorOS 6 based on Android Pie out of the box. This is a drawer-less interface that has several third-party as well as OPPO bloatware and thankfully the former can be removed to free up resources. There are some useful features as well like Game Space, Gesture support, Clone apps, Smart Assistant and more. While I was still writing this piece, OPPO pushed out a new software update that promised to bring camera improvements according to the changelog, which is a plus. 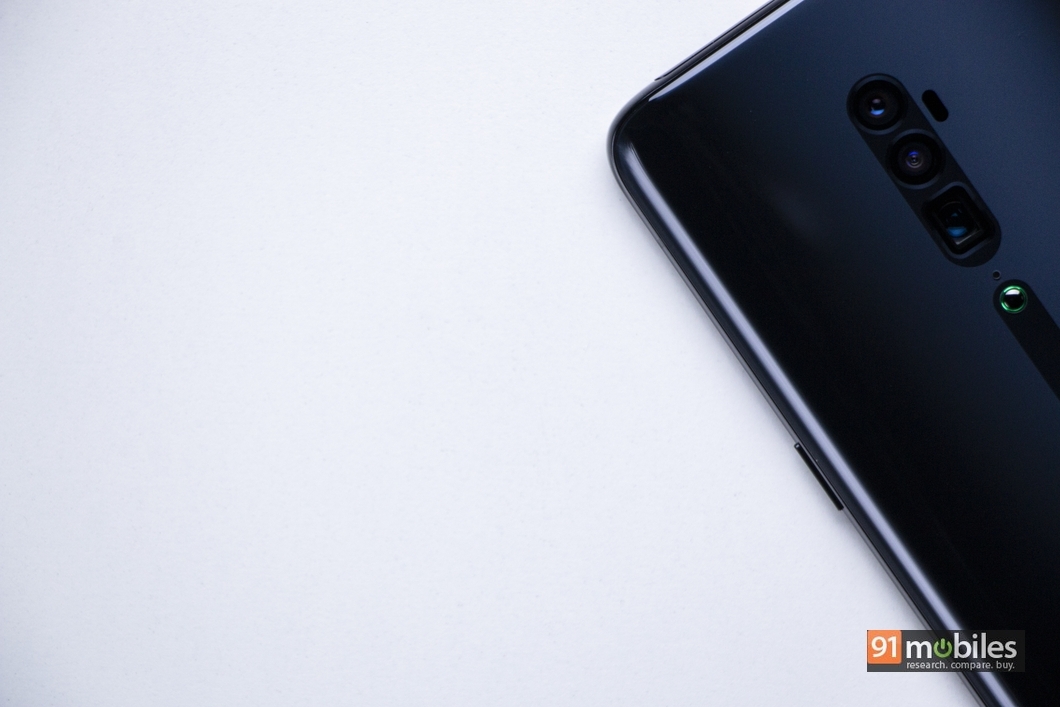 Let’s come to the highlight of the handset – the triple camera module on the rear panel. The module comprises a 48MP primary sensor with f/1.7 aperture, an 8MP f/2.2 secondary wide-angle shooter, and a telephoto 13MP f/3.0 third snapper. The shark-fin module on the top houses a 16MP f/2.0 shooter. The camera app interface is pretty standard with modes like night, panorama, expert, timelapse, slow motion, Dazzle colour mode, HDR, AI scene recognition and more. The initial images captured in all modes were pretty impressive especially the ones with dazzle colour mode on and portrait shots. I will leave the detailed camera analysis for the review.

The OPPO Reno 10x Zoom Edition has definitely got what it takes to take on the heat from the reigning champ in this price segment, the OnePlus 7 Pro. The smartphone features everything that the competitor offers but in a much more premium body, not to forget that futuristic looking shark-fin selfie camera module. The upcoming ASUS ZenFone 6 (first impressions) might also pose a threat because of its advanced flip camera module, which makes it a strong selfie camera phone. However, it boils down to personal preferences and my vote goes to the OPPO Reno 10x Zoom Edition.