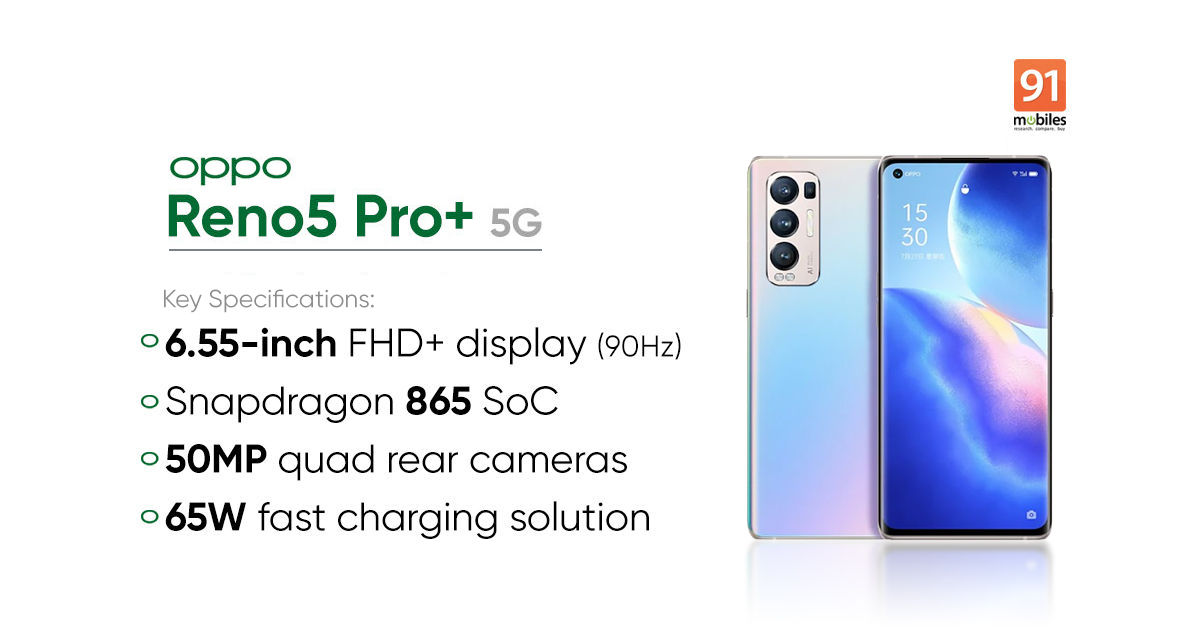 OPPO Reno5 Pro+ 5G has appeared on the FCC and Bluetooth SIG certification websites, which suggests its imminent global launch. To recall, the smartphone was launched in China last month soon after the Reno5 and Reno5 Pro. OPPO Reno5 Pro+ specifications include the flagship Qualcomm Snapdragon 865 SoC, 50MP quad cameras, an FHD+ 90Hz display, and 65W fast charging support, among other things. Now, the OPPO Reno5 Pro+ launch in global markets seems imminent as the smartphone with model number CPH2207 has appeared on both the FCC and Bluetooth SIG certification websites.

The FCC certification reveals everything that we already know about the OPPO Reno5 Pro+ in terms of specifications. The listing reveals that the smartphone with model number CPH2207 4,450mAh (marketed as 4,500mAh) battery with support for 65W fast charging, much like the China variant. The FCC document also reveals the smartphone supports Bluetooth 5.2, NFC, Android 11, and 5G connectivity. Meanwhile, the Bluetooth SIG website doesn’t reveal much about the phone but confirms that the CPH2207 model is the global variant of the Reno5 Pro+.

The OPPO Reno5 Pro+ features a 6.55-inch FHD+ AMOLED display with a hole-punch cutout for the selfie camera and a 90Hz refresh rate. The smartphone comes with an in-display fingerprint sensor and 5G support. Powering the phone is the Qualcomm Snapdragon 865 chipset paired with 12GB RAM and up to 256GB internal storage. The smartphone packs a 4,500mAh battery and supports 65W SuperVOOC fast charging.

OPPO Reno5 Pro+ specs also include a quad-camera system that comprises a 50MP primary sensor, a 16MP wide-angle lens, a 13MP telephoto camera, and a 2MP macro lens. Over at the front, the phone gets a 32MP front-facing camera. Connectivity options include Wi-Fi, Bluetooth 5, GPS/ GLONASS/ Beidou, NFC, and USB Type-C port.