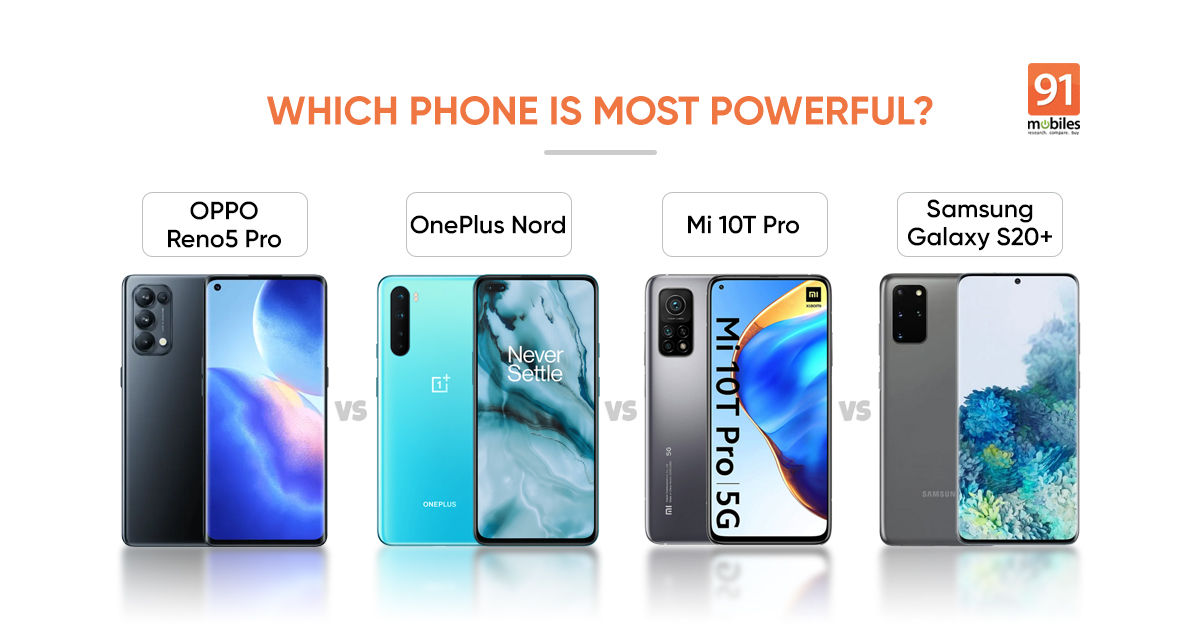 The OPPO Reno5 Pro (review) has been unveiled in India at a price of Rs 35,990 and it is the first phone in the country to be powered by the MediaTek Dimensity 1000+ chipset. Having reviewed the Reno5 Pro, I was quite satisfied with the handset’s performance gains over its predecessor, which was powered by Qualcomm’s Snapdragon 720G chipset. However, what caught me by a surprise was the Dimensity 1000+’ ability to keep up and sometimes even outperform flagship chipsets from Samsung and Qualcomm. 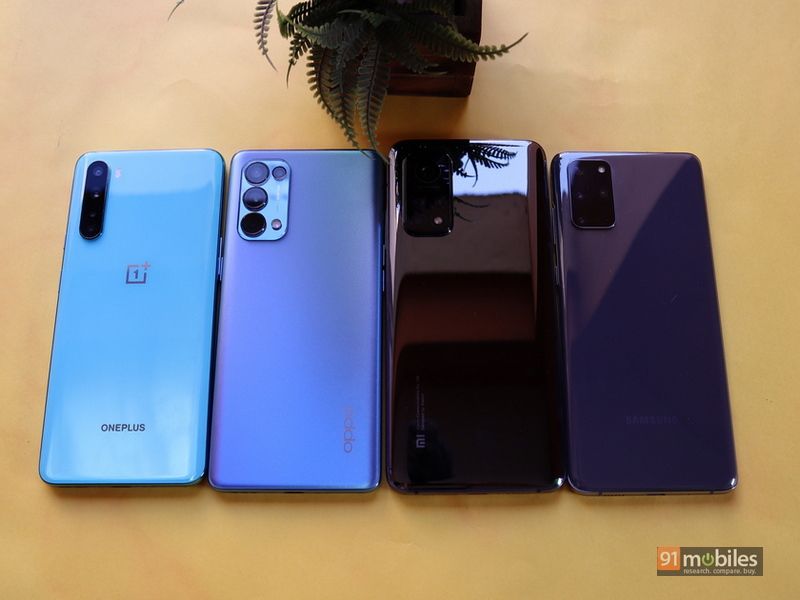 Announced a while back in 2020, the 7nm based MediaTek Dimensity 1000+ was introduced on several phones in China before the time was ripe to enter the Indian market. The Taiwanese semiconductor giant has been a vital cog in the latest string of high-performance budget phones in the country. The Helio G90 and G90T are such examples that pushed the boundaries of performance to cost previously unimaginable for under Rs 15,000 phones. Industry heavyweight Qualcomm, whose shadow loomed over MediaTek for quite a while, had to step up up its mid-range chipset game to keep with the competition. As such we got to see the Snapdragon 720G, 732G, 750G, and more in budget and lower mid-range phones. MediaTek’s Dimesity 1000+ is not the pure flagship SoC that can outmatch something like the Snapdragon 865. However, it is most definitely a cheaper and capable alternative, which is again going to put Qualcomm on its toes much like how AMD is coming hard on Intel in the PC world.

I decided to pit the Reno5 Pro against a variety of devices to gauge its processing and graphics capabilities. For this comparison, I’m using the Mi 10T Pro (review) which is priced close to the Reno5 Pro and is powered by the flagship Snapdragon 865 chipset. Apart from that I also have the OnePlus Nord (review) that has the current highest mid-range SoC from Qualcomm called the Snapdragon 765G and lastly the Galaxy S20 Plus (review) with last year’s flagship Exynos 990 SoC. I don’t expect the Reno5 Pro to beat any of these devices in all categories but the point is to show how close MediaTek is getting towards dethroning the current giants in the Android world: Qualcomm and Samsung.

In many cases, putting a smartphone through various benchmarks is a quantitative measure of how good it is in comparison to other devices. For this test, I will be using Geekbench 5, Antutu, GFXbench, and 3DMark to show, at least on paper, how impressive the Reno5 Pro and its MediaTek Dimensity 1000+ chipset is. The amount of RAM and storage also plays a part in getting better scores. That is why I have used the 8GB RAM + 128GB storage variant on all phones testing except the OnePlus Nord, which gets 12GB RAM + 256GB to bring its price closer to the Reno5 Pro.

The single overall score generated on AnTuTu takes into consideration the CPU performance, multi-tasking capabilities, AI optimisation, and overall graphical capabilities. In that regard, the MediaTek Dimesity 1000+ happens to slightly lag behind the typical flagships but again, not by much. The OPPO Reno5 Pro had an overall score of 444,951 which very much ahead of the OnePlus Nord’s 331,193. As expected the Mi 10T Pro’s AnTuTu score touched 567,321 however, the Exynos 990 on the S20 Plus was only just ahead of the Reno5 Pro with a score of 492,438. The gap between the S20 Plus and Reno5 Pro is even less when you look at just the GPU result where the former has a score of 181,861 while the latter has procured 174,679 points.

To test the SoC’s GPU a bit further, I ran GFXBench on all four devices which runs a couple of GPU-intensive simulations and highlights the frame rate at which the SoC is capable of running them. The popular synthetic tests within GFXBench are Manhattan and T-Rex. The OPPO Reno5 Pro had frame rate scores of 59 and 60fps respectively while the OnePlus Nord lagged behind in Manhattan at 48fps but kept up in T-Rex with 60fps. For Exynos 990 powered Galaxy S20 Plus the Manhattan score was 56fps and T-Rex was at 60fps. Interestingly, the Mi 10T Pro with the Snapdragon 865 chipset actually performs the second-worst on Manhattan with a score of 50fps and the worst on T-Rex with 50fps.

3DMark, a benchmarking test that pushes the GPU to its limits, also showcases the graphical prowess of the Reno5 Pro. The SlingShot Extreme test when run on all phones gave similar results as I had seen on GFXBench. The OnePlus Nord showed the lowest score of 3,307 which was to be expected. At number three spot came the Mi 10T Pro with a score of 5,996 points. The Dimensity 1000+ chipset gave the Reno5 Pro a score of 6,320 points while the number one spot goes to the Galaxy S20 Pro with a score of 7007 points. All phones were running at different frame rates, so I ran each test on all available frame rate options on each phone and the changes to the scores were very insignificant.

For a considerable amount of time, the base parameter for judging whether a phone’s GPU is any good was running PUBG Mobile on it. The title really pushed the gears on any mobile chipset leading to overheating and frame drops after playing for a significant time. Whichever device remained the coolest and dropped the fewest frames after at least a one-hour session of PUBG Mobile can easily be declared as the best gaming phone. However, now with the ban in place, we have to move to the next best alternative which is Call of Duty: Mobile. For this test, I ran the game at the maximum possible graphics settings on each phone and played for one hour on each.

Talking first about the launching time, from the phone’s home screen to the game’s login screen, all the phones open up Call of Duty at about the same time. The Mi 10T Pro was fractionally fast than the OnePlus Nord but the difference between all four phones is negligible. All background tasks and apps had been shut before opening the game. After logging into my Call of Duty account on each phone, I checked the maximum possible graphics and frame rate settings possible.

With the OPPO Reno5 Pro, the game’s maximum settings do not allow both the Graphics Quality and Frame Rate options to be maximum. If the former is set at Very High then the Frame rate cannot be taken to Max and can only go up to Very High. However, the toggles for Depth of Field, Real-Time Shadows, Bloom, and Ragdoll can all be turned on but the Water reflection setting can only be enabled when the Graphics Quality is Very High. This is true also on the Snapdragon 765G powered OnePlus Nord. Running the game on both devices was a smooth experience as I had slightly lowered the graphics to High to accommodate the Max frame rate option. I ran the game on both phones for one hour and the results were more-or-less what I had expected. The Reno5 Pro did run a bit hotter rising from 24 degrees to 39 degrees as compared to the OnePlus Nord, whose temperature rose from 25 degrees to 37 degrees. However, the Reno5 Pro only consumed 19 percent of its battery while the Nord was down by 23 percent after an hour of gaming. Honestly, from the perspective of a casual mobile gamer, I did not see any difference in the gameplay on a proper flagship smartphone as compared to the Reno5 Pro.

The Mi 10T Pro and Galaxy S20 Plus can manage to run the game at Very High Graphics quality with the Frame rate set to Max. Both of these settings are the maximum you can apply to the game. All the toggles mentioned above can also be turned on. The resulting game ran smoothly without dropping frames even after one hour of gaming. The Galaxy S20 Plus’ battery showed a temperature increase from 25 degrees to 37 degrees and was depleted by 21 percent over the course of the hour. The Mi 10T Pro’s battery, after an hour, had depleted by 18 percent while the temperature stood at 36 degrees which was an eight-degree spike from 28 degrees.

While the MediaTek Dimensity 1000+ chipset on the Reno5 Pro is just a notch below the flagship SoCs from Qualcomm and Exynos in terms of synthetic tests, it goes toe-to-toe with the chipsets in terms of gaming. The Dimensity 1000 series will undoubtedly invoke serious competition between MediaTek and Qualcomm, with both OEMs trying to one-up each other by offering a better VFM chipset. What’s more, we have also seen the announcement of the 6nm based Dimensity 1200 SoC that will power a Realme phone very soon. It’s anyone’s guess as to how well that chipset will perform with its Cortex A78 CPU cores which can clock up to 3.0GHz. But, one thing is clear – the launch of MediaTek’s Dimensity chipsets in the country will benefit end consumers greatly as they will be offered choices of increasingly powerful devices at lower costs than ever before.