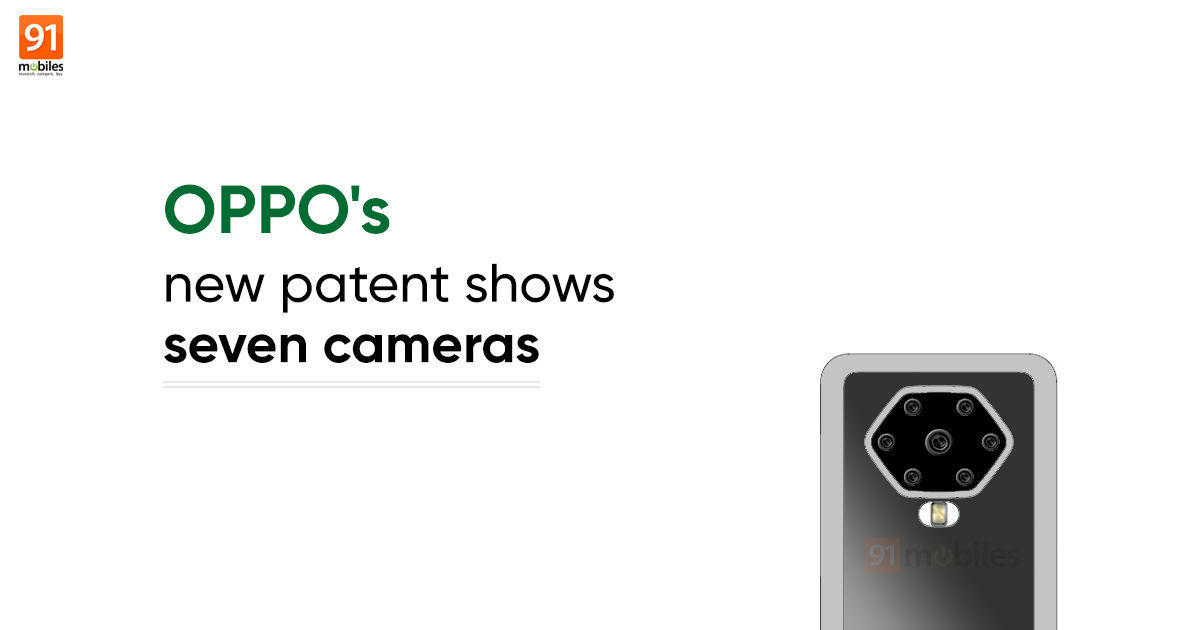 OPPO has recently announced that it’ll be taking the stage at MWC 2020 to launch its Find X2 series smartphones. Ahead of that, a patent showing a smartphone design with as many as seven cameras has surfaced on Chinese certification site CNIPA. We’ve seen phones such as Nokia 9 PureView and Mi Note 10 with five-camera setups, but this could be the world’s first smartphone with seven cameras on the back. The camera details are, of course, unknown at the moment, but we’re sensing it’ll set a new benchmark in smartphone photography if it launches. The design patent also reveals the handset will have a seamless design, meaning no ports and buttons.

The patent design shows the OPPO phone with seven camera can sport hexagonal or circular camera module at the back. The handset’s fascia, meanwhile, will sport an edge-to-edge display with waterdrop notch atop for the selfie camera atop. This means there will be a total of eight cameras onboard the smartphone. The camera module will also protrude from the back. Additionally, the OPPO handset seems to feature seamless edges with no ports or buttons whatsoever.

In that respect, it could be similar to the Vivo APEX 2019 smartphone from last year. The handset was launched with touch-sensitive buttons for the volume and power keys instead of physical hardware buttons. The APEX 2019 also had pogo pins on the back for a magnetic connector, similar to what we have seen for Moto Mods on Motorola phones, for charging as well as data transfer. There were no speaker holes on the phone’s body as well — instead, the sound is emitted directly from the screen using the sound-on-display tech. While there are no magnetic pins visible in the design patent, that could be a possibility. Otherwise, the smartphone may just rely solely on wireless charging to juice up the battery.

That’s all we know about the OPPO smartphone at the moment. The handset could be a flagship offering with Snapdragon 865 SoC ticking at its core or a concept device, or it could be launched years from now. The advantage with the multiple-camera setup is that it allows OEMs to fit in an array of sensors, including the main lens, depth unit, macro lens, ultra-wide lens, telephoto lens, 3D ToF lens, and periscope lens for zoom shots. Only time will tell what OPPO has planned for the seven-camera smartphone and what applications it has for the additional sensors.