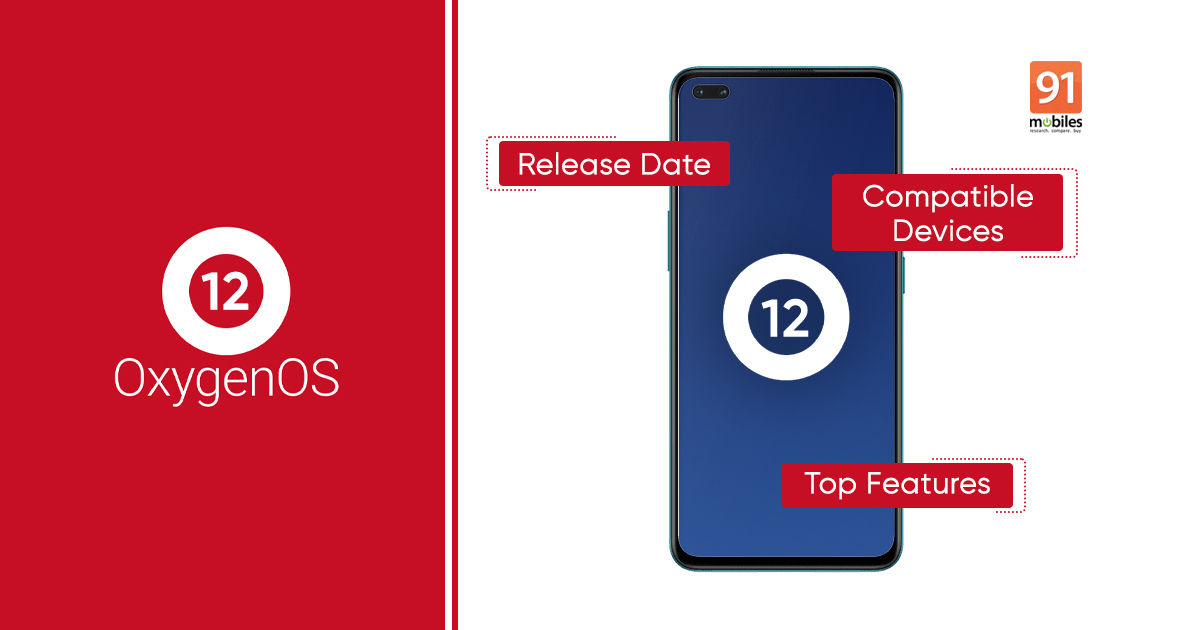 Oxygen OS 12 release date, feature, and list of supported devices, among other things, have officially been announced by OnePlus. The new custom skin that is based on Android 12 offers much tighter integration with OPPO’s ColorOS. This doesn’t come as a surprise as earlier this year OnePlus announced that it’s merging its research and development department with its sister company OPPO. The new Oxygen OS 12 for OnePlus devices is said to help you focus on and move seamlessly between work, rest, and play. The custom skin comes with streamlined and subtly textured visuals, along with Work Life Balance 2.0, OnePlus Scout, better integration with the smartwatch, enhanced dark mode, and more. Here’s everything you need to know about Oxygen OS 12:

The list of OnePlus Oxygen OS 12 update eligible devices include

OnePlus has announced a host of new features for the Oxygen OS 12 update. Let’s take a look at them

This will allow users to shift from Work and Personal profiles, with customised notification and app access, seamlessly. The feature was previously exclusive to a particular region; however, with Oxygen OS 12, the Work Life Balance will be available for all across the globe.

The Oxygen OS 12 has three different levels of dark mode that are said to make content easier to read. It’ll allow users to adjust the level of darkness on OnePlus devices. The feature has been a direct pick from the ColorOS.

OnePlus’ new custom interface also brings more streamlined visuals than ever before, as well as accentuating light and space, simple geometric lines and shapes to ensure a clean interface with fresh elements.

This nifty little feature lets you find anything on your phone, from documents, contacts, music tracks, to web entries, with a quick search. The OnePlus Scout also comes with a voice search feature for faster results. It’s coming to all OnePlus devices with Oxygen OS 12.

The shelf is the OnePlus take on widgets. It’ll allow your Oxygen OS 12 to display glance cards on your screen for quick information on weather, step counter, data, storage and more. You can also interact with them with a simple tap.

OnePlus has added new customisation options to Canvas for Always-on Display with Oxygen OS 12. Previously with Oxygen OS 11, the feature would only allow users to set wireframe pictures based on the lock screen wallpaper of the phone. However, Canvas 2.0 will let you personalise your lock screen experience with inspiring visuals and portraits.

Another notable feature of Oxygen OS 12. It safely secures your data, including images, videos, audio, and documents, inside a virtual lockbox. This way your files will be isolated from other apps while remaining personally accessible to you.

These were among the noteworthy features of the Oxygen OS 12 update. In addition to this, the custom skin also comprises several Android 12 features, a system booster and Quantum Animation Engine 3.0 for faster and smoother performance, a Theme store, enhanced gaming modes, and OnePlus Watch integration.

OnePlus 9RT will get Android 12 update this summer (January 18th)

The recently-launched OnePlus 9RT smartphone comes with Android 11-based OxygenOS out of the box. However, the company has promised that the smartphone will get the Android 12 update during March-April, 2020, period.

OnePlus has rolled out another OxygenOS 12 build for its flagship OnePlus 9 and OnePlus 9 Pro. The new update comes with a few more optimizations and bug fixes. Only the global and Indian variants of the OnePlus 9 and 9 Pro are eligible for this update, OnePlus said in its official post.

OnePlus 9 and OnePlus 9 Pro smartphone users would be relieved to know that the company has addressed the issue with auxiliary cameras and promised to fix it via an update in the future. The auxiliary camera is among several issues OnePlus 9 series users are facing with the Oxygen OS 12. The issue is preventing users access to the ultra-wide or the telephoto camera in the modded Google Camera app.

OnePlus has started rolling out Oxygen OS 12, which is based on Android 12, for its latest flagships OnePlus 9 and 9 Pro again. The update was suspended, owing to bugs and issues. The company claims that those problems have been ironed out and interested users can update their devices with OxygenOS 12.

OnePlus has started rolling out the stable update for OnePlus 9 and OnePlus 9 Pro in India. To update your devices, go to Settings > System > System Updates. It’s worth mentioning that the software update will release in batches, so you may have to wait for a few days to receive the official update.