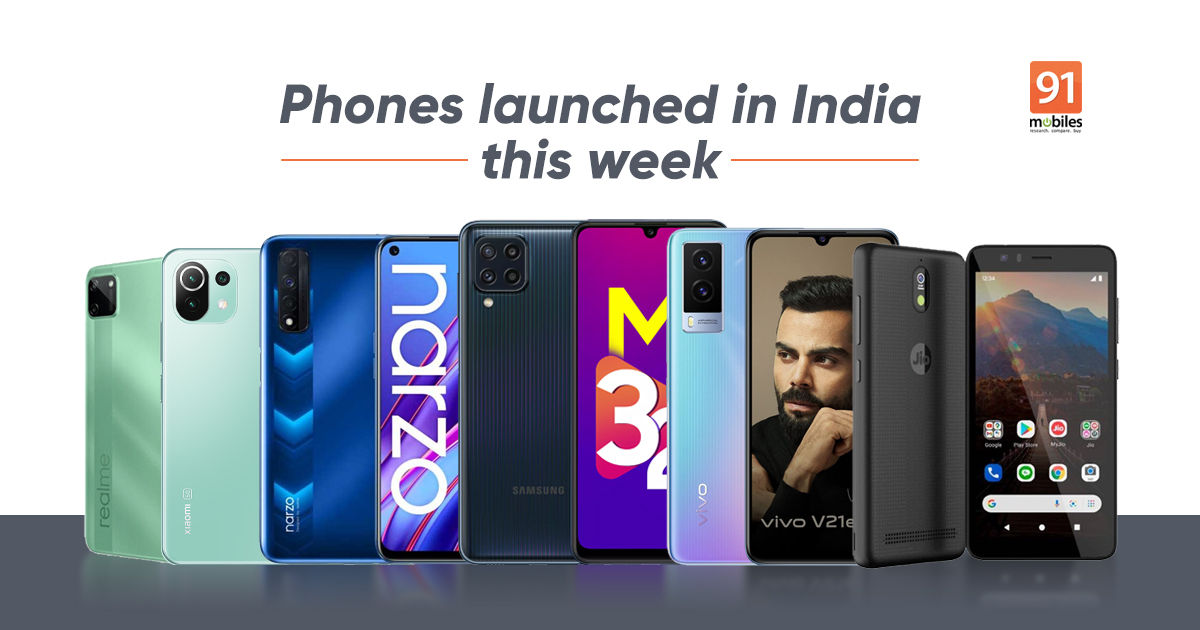 The fourth week of June has seen as many as seven smartphones launch in India. The week started off with the launch of the Samsung Galaxy M32, which comes as a successor to the popular Galaxy M31, followed by the much-awaited Mi 11 Lite, Narzo 30, Narzo 30 5G, Vivo V21e, Jio Phone Next, and Realme C11 2021 version. Among these, the Xiaomi phone is touted as the slimmest phone of 2021, measuring in at just 6.81mm thickness. The Realme C11 2021 has been silently launched in the market just a couple of days after the Narzo 30 announcement. Here’s a quick rundown of the smartphones that launched in India between June 18th and June 25th. 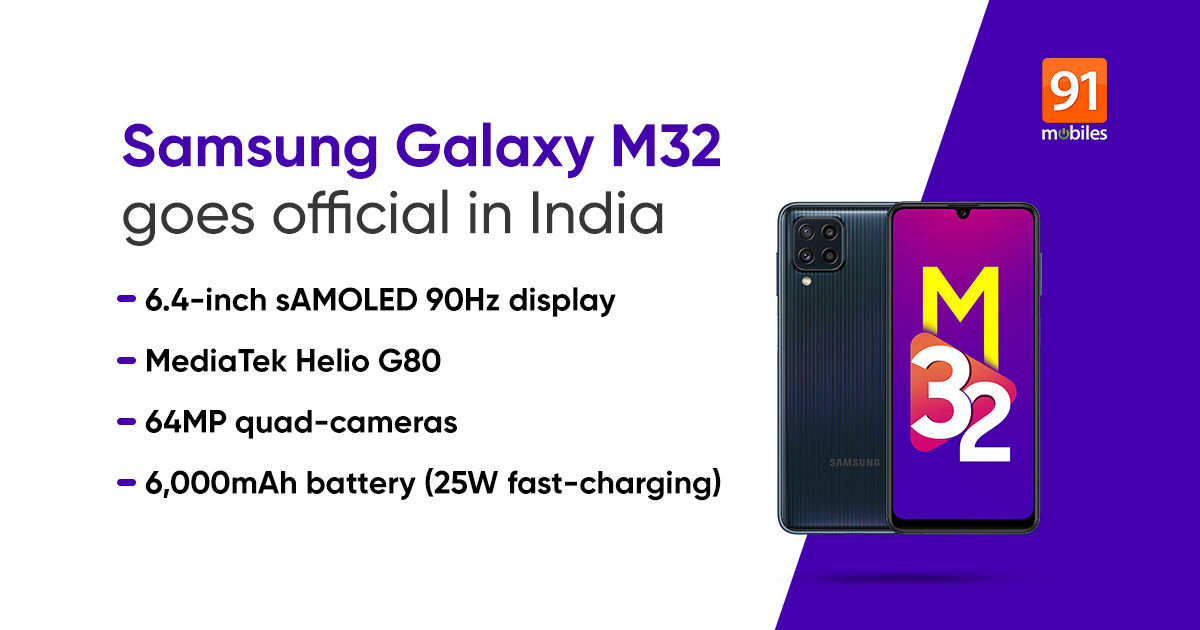 Samsung Galaxy M32 launched in India on June 21st. The handset flaunts a 6.4-inch FHD+ Super AMOLED display with a 90Hz dynamic refresh rate and 800nits brightness. It is powered by the MediaTek Helio G80 SoC coupled with up to 6GB RAM and 128GB storage that is further expandable via a microSD card. The phone packs a 6000mAh battery with 25W fast-charging support and runs on Android 11-based OneUI 3.1 custom skin. The phone has support for Samsung Pay for cardless payments and a side-mounted fingerprint sensor for security.

The Samsung Galaxy M32 has a quad-camera setup on the back, with a 64MP primary camera, an 8MP wide-angle lens, a 2MP macro lens, and a 2MP depth sensor. On the front, it has a 20MP snapper for selfies and video chats. Connectivity options include 4G, dual-band Wi-Fi, Bluetooth 5.1, GPS, and USB Type-C port for charging and data transfer. 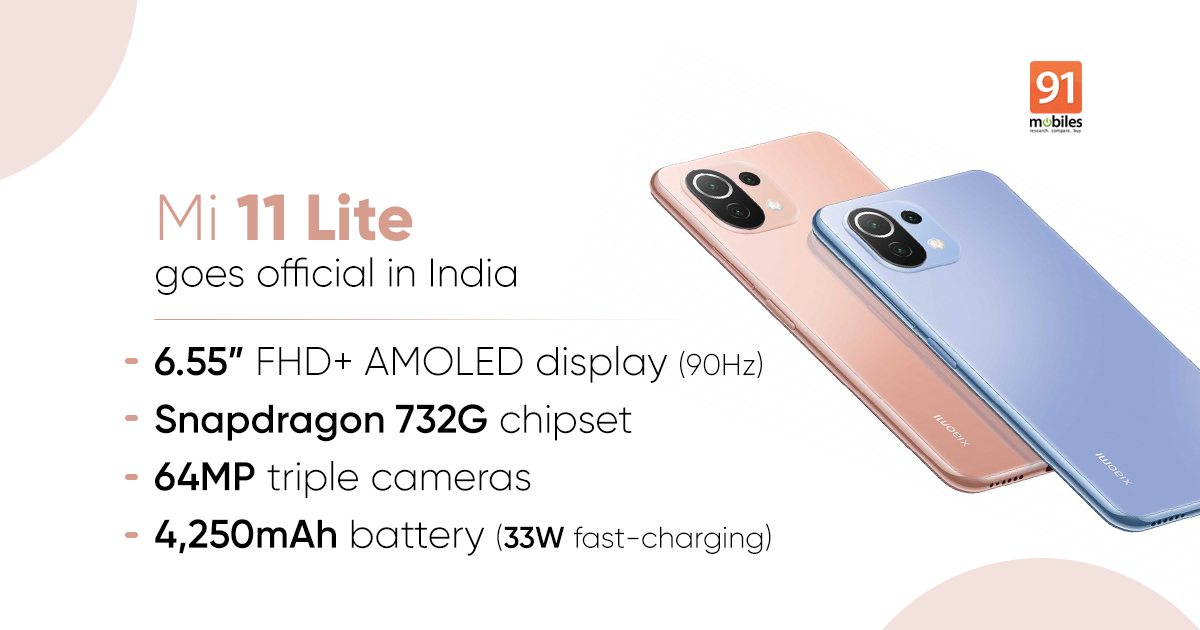 Xiaomi Mi 11 Lite has a triple-camera setup on the back, with a 64MP (f/1.79) primary sensor, an 8MP (f/2.2) ultra-wide-angle lens, and a 5MP (f/2.4) tele-macro lens. There is a 16MP sensor on the front for selfies and video calls. Connectivity features include 4G, dual-band Wi-Fi, Bluetooth, GPS, and USB Type-C port for charging and data sync. 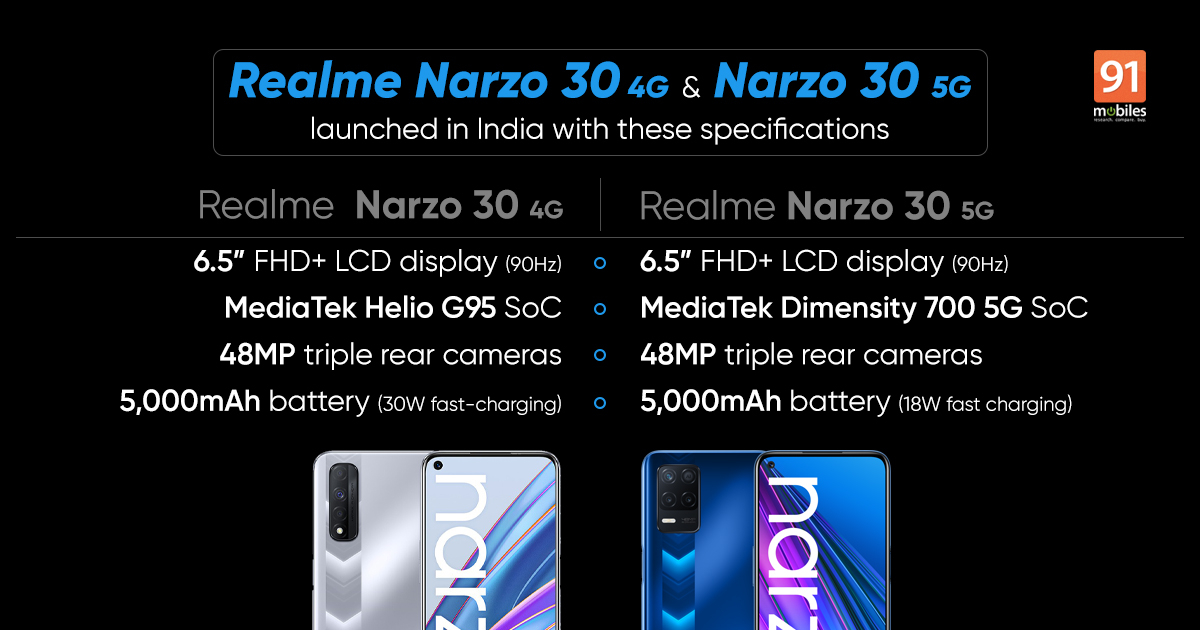 Realme Narzo 30 launched in the country on June 24th. It comes in both 4G and 5G variants that share key specifications. The Realme Narzo 30 comes with a 6.5-inch FHD+ LCD display, a 90Hz refresh rate, and 580 nits brightness. While the 4G variant is powered by the MediaTek Helio G95 SoC with Mali G76 GPU, the 5G variant comes with the MediaTek Dimensity 700 5G chipset. The phone packs up to 6GB RAM and 128GB storage that is expandable via a microSD card. The phone runs on Android 11 OS with Realme UI custom skin on top. The handsets pack a 5,000mAh battery and connectivity features include 5G/4G, dual-band Wi-Fi, Bluetooth 5.0, GPS, and USB Type-C port for charging and data transfer.

Realme Narzo 30 4G supports 30W fast-charging, while the 5G version gets only 18W charging speeds. The Realme Narzo 30 (5G) has a triple camera setup on the back, with a 48MP primary sensor, a 2MP macro lens, and a 2MP B&W portrait sensor. However, the 4G model gets a 2MP depth sensor in place of a 2MP B&W lens. There is a 16MP snapper for selfies and video chats and has a side-mounted fingerprint sensor for security.

Also read: Jio Phone Next announced: a closer look at the ultra-affordable 4G smartphone from Jio and Google 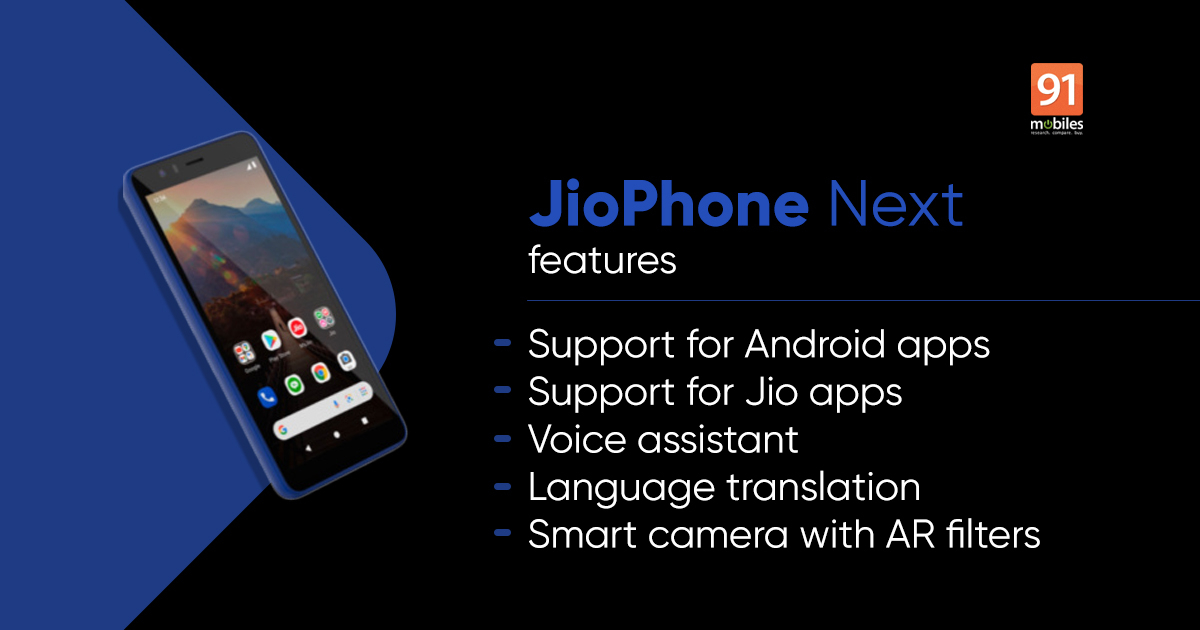 Jio Phone Next was announced at the 44th Reliance AGM on June 24th. It will be the company’s affordable 4G offering that was co-developed in partnership with Google. The phone runs on an optimised version of Android and will have features like voice assistant, AR filters, language translation, read-aloud of screen text, and more. However, Reliance hasn’t announced the complete specifications and price of Jio Phone Next just yet, but it will be on sale from September 10th in the country. 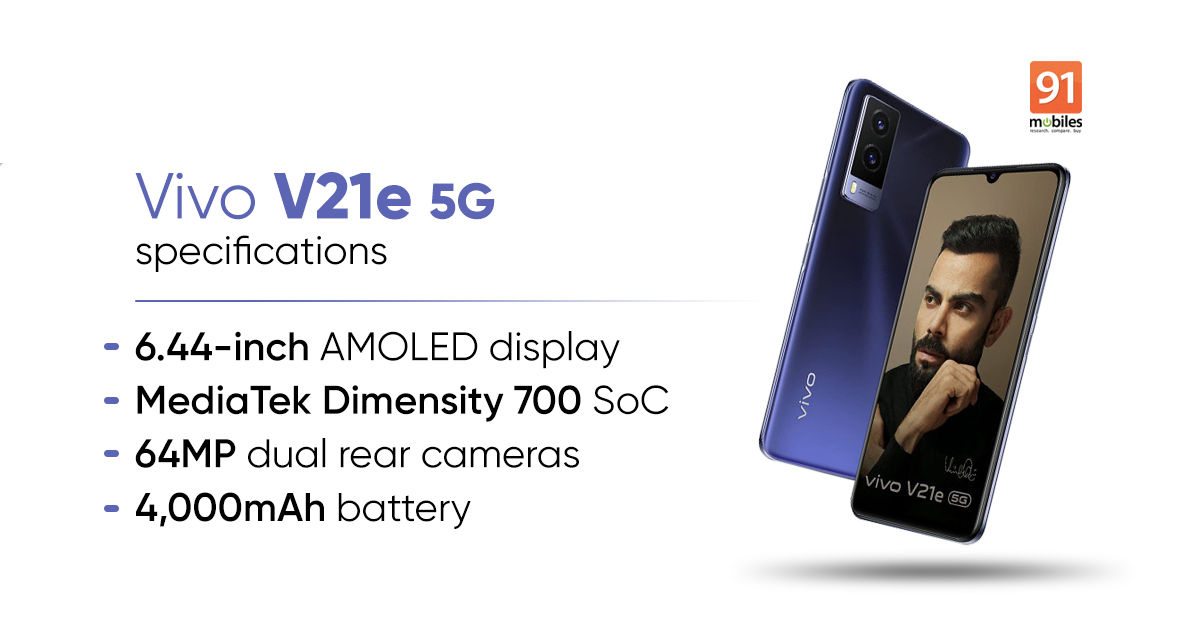 Vivo V21e launched in India on June 24th. It comes with a 6.4-inch FHD+ AMOLED screen with Schott Xensation UP. It is powered by the MediaTek Deimensity 700 5G SoC paired with 8GB RAM and 128GB storage that is expandable further. It runs on Android 11 based Funtouch OS 11.1 custom skin out of the box and has a 4,000mAh battery and support 44W fast charging support. Vivo V21e has a dual-camera setup on the back, with a 64MP primary sensor and an 8MP ultra-wide-angle lens. There is a 32MP sensor on the front for selfies and video calls and an in-display fingerprint sensor for security. Connectivity options include 802.11 b/g/n/ac/ Wi-Fi, Bluetooth 5.0, a USB Type-C port, and a 3.5mm audio jack. Realme C11 has been launched in India on June 25th. It comes as a refresher to the original Realme C11. The phone sports a 6.5-inch IPS LCD HD+ display with 1,600 x 720 pixels resolution, a 60Hz refresh rate, and a V-shaped notch at the top. It is powered by the Unisoc SC9863A processor coupled with IMG8322 GPU, 2GB RAM, and 32GB storage that is further expandable up to 256GB. the phone runs on Android 11 Go Edition-based Realme UI skin and has a 5,000mAh battery with 10W charging support.

Realme C11 2021 has an 8MP camera on the back and a 5MP snapper on the front for selfies and video chats. The phone doesn’t have a fingerprint sensor for security. Connectivity options include Dual 4G VoLTE, Wi-Fi 802.11 b/g/n, Bluetooth 4.2, GPS/ GLONASS/ Beidou, and a microUSB port.