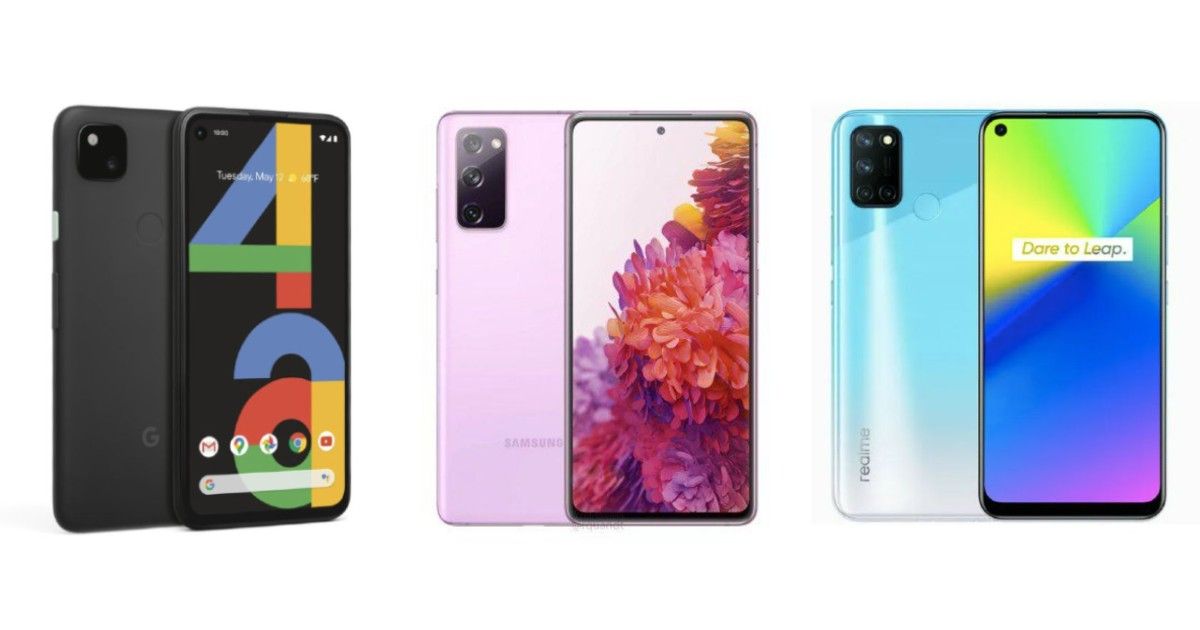 There are tons of new smartphones launching in October from brands like POCO, Realme, Samsung, Google, Vivo, Apple, and more. This week itself, at least five highly-anticipated phones are launching in India, including the Google Pixel 4a, Samsung Galaxy S20 FE, Samsung Galaxy F41, POCO C3, and Realme 7i. The Pixel 4a, Realme 7i, and Galaxy S20 FE, to recall, have all been launched globally and we will soon know their official prices in India. The Samsung Galaxy F41 and POCO C3 will be making their global debut in India this week as well.

POCO C3 is set to launch in India today and is expected to be the cheapest phone from the brand yet. POCO C3 price in India is already confirmed to fall under Rs 10,000 but the exact price and sale date will be announced during the launch event. The POCO C3 specifications from what has been revealed so far include a 5000mAh, HD+ waterdrop display, 13MP triple camera setup, and up to 4GB RAM. The handset could pack a 5MP camera on the front and connectivity options such as Dual 4G VoLTE, Wi-Fi, Bluetooth 5, GPS + GLONASS, and micro USB port.

Samsung Galaxy S20 FE price in India is also expected to be announced today. As per 91mobiles, the phone’s price will be Rs 49,999. The Samsung Galaxy S20 FE was launched globally last week with specifications that include a 120Hz refresh rate 6.5-inch FHD+ Super AMOLED Infinity-O display, 12MP triple rear cameras, 4,500mAh battery, 32MP selfie camera, Android 10 with OneUI 2.5, and wireless charging support. The phone will most likely be available in the country with 4G connectivity and the Exynos 990 SoC.

Realme 7i: launching on October 7th

Realme 7i India launch is on October 7th and the smartphone will arrive alongside the Realme 7 Pro Sun Kissed Leather edition, Realme Buds Air Pro, Buds Wireless Pro, 55-inch SLED 4K TV, and a few more IoT devices. The Realme 7i will be the third smartphone in the series that already includes the Realme 7 and 7 Pro. The Realme 7i price is expected to be lower than the Realme 7, which is retailing at a starting price of Rs 14,999. The company is teasing the device as the first 64MP camera phone in the segment, so we speculate the phone’s to be under Rs 10,000. The Realme 7i was launched in Indonesia with specifications like a 6.5-inch HD+ display, 90Hz refresh rate, Snapdragon 662 SoC, 8GB RAM, 128GB internal storage, 64MP quad cameras, 16MP front-facing camera, and a 5,000mAh battery with 18W fast charging support.

The Samsung Galaxy F41 will be the first F-series smartphone in India and will be sold exclusively on Flipkart. The handset will be unveiled in the country via an online event on October 8th with a waterdrop AMOLED display and a 6,000mAh battery. The phone is also confirmed to rock triple rear cameras with a 64MP primary sensor. The Samsung Galaxy F41 price could be around Rs 15,000 as the phone shares a lot in common with the Galaxy M31. The phone will retail exclusively on Flipkart.

Pixel 4a: launching on October 9th

The Pixel 4a launch seems to be on October 9th as per Flipkart, though the phone will go on sale on October 17th during the Big Billion Days Sale. The Pixel 4a, for those unaware, comes with mid-range specifications including a 60Hz 5.8-inch FHD+ OLED display, Snapdragon 730G chipset, 12MP camera, a 3,140mAh battery, and an 18W fast charging solution. It also features stereo speakers, 3.5mm headphone jack, and a polycarbonate unibody that includes a rear-mounted fingerprint sensor. The Google Pixel 4a runs on a clean and stock Android 10 software with a promise of three major software upgrades.

The Top 5 Upcoming Windows Smartphones in India for April 2012