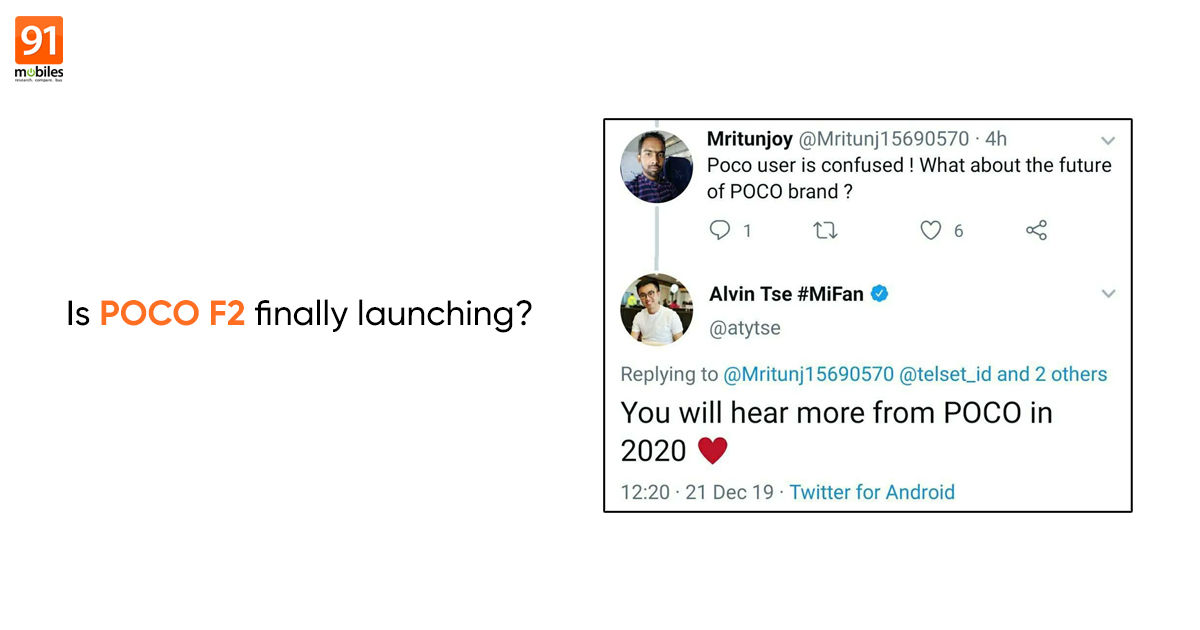 The much-awaited POCO F2 smartphone could break covers as early as next year. Pocophone Global head Alvin Tse has hinted that the successor to the POCO F1, which was unveiled last year, will be launched in 2020. While responding to a user query about the future of the POCO brand, Tse tweeted “You will hear more from POCO in 2020.” The tweet, however, has since been removed, but it’s an indication that the next-gen POCO F2 smartphone could be heading our way. There are no official details about the POCO F2 yet; however, the phone has been the subject of several speculations and rumours.

The POCO F2 is believed to come with a pop-selfie camera design and triple rear cameras, inspired by the Redmi K20 series. The phone will reportedly sport an all-display fascia, with no notch or cut-out whatsoever. While the rumours previously suggest that the handset could be powered Snapdragon 845 SoC, it’s possible that the vendor may use the newer Snapdragon 855 Plus chipset. The POCO F2 would also feature USB Type-C port for charging and a dedicated 3.5mm headphone jack.

Like its predecessor, the POCO F2 is expected to be an affordable flagship, and speculations are rife that it could be priced similar to Redmi K20, around the Rs 20,000 – Rs 22,000. The POCO F1, to recall, was launched in India at a starting price Rs 20,999. The handset was the cheapest phone with Snapdragon 845 SoC back then and sport a 6.18-inch notch-toting display.

For photography, the handset ships with 12MP + 5MP dual rear cameras and 20MP front camera for selfie and video calling. A beefy 4,000mAh battery with Quick Charge 3.0 support fuels the POCO F1, while Android 8 Oreo-based MIUI 9 out of the box to take care of the software side of the things.