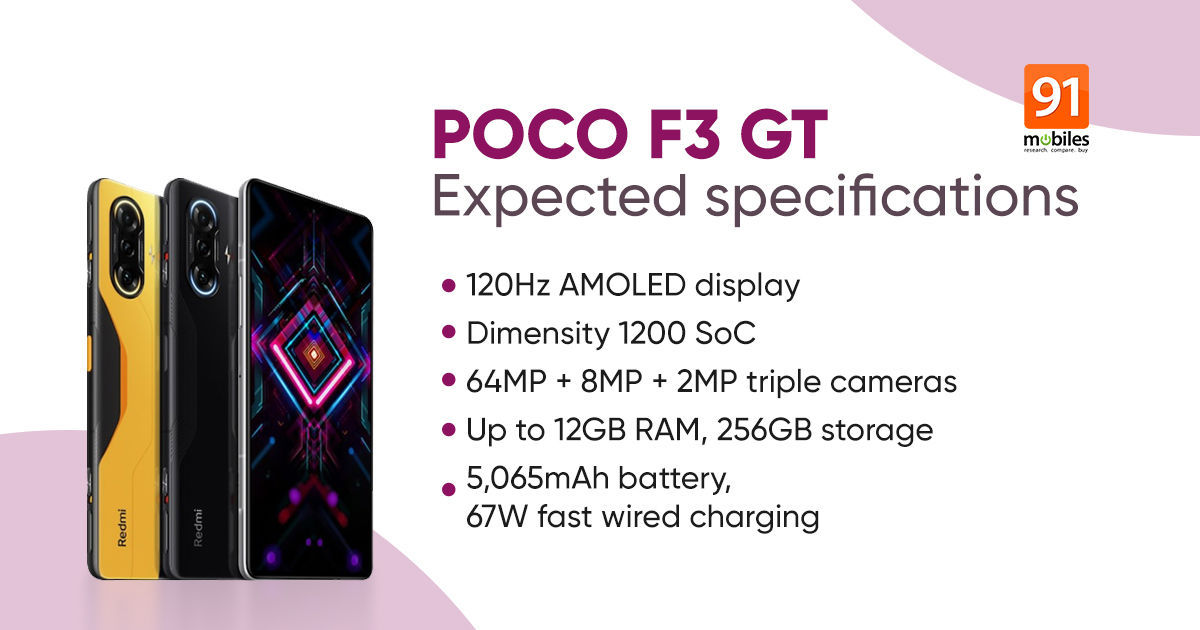 POCO F3 GT Indian launch date has been revealed by the brand after multiple teasers and promotional tweets. The launch will happen on July 23rd at 12pm IST, this is just a day after the OnePlus Nord 2 launch in India; the two phones will compete in the Rs 30,000-segment. Coming back to the POCO teaser, the poster shows the Call of Duty Mobile theme in the background, which suggests the POCO F3 GT will have a special focus on gaming. This isn’t surprising considering the handset is speculated to be a rebrand of the Redmi K40 Game Enhanced Edition. The company had already confirmed the handset will ship with MediaTek Dimensity 1200 SoC, 120Hz AMOLED display with HDR10+ and DC Dimming, Dolby Atmos, aluminium alloy frame, and glass body. We should know the POCO F3 GT price in India and sale details when it’s launched next week.

POCO F3 GT specifications are expected to be similar to those of Redmi K40 Game Enhanced Edition. This means it will come with a 6.67-inch OLED display, a 120Hz refresh rate, 480Hz touch sampling rate, HDR10+, and punch-hole cutout for the selfie snapper. It will be powered by the MediaTek Dimensity 1200 SoC paired with up to 12GB RAM and 256GB storage that is further expandable via a microSD card. The phone boots Android 11-based MIUI 12 custom skin and packs a 5,065mAh battery with 67W fast-charging support.

As for the cameras, the Redmi K40 Game Enhanced Edition aka the POCO F3 GT has a triple camera setup at the back, with a 64MP primary sensor, an 8MP wide-angle lens, and a 2MP macro lens. It has a 16MP snapper on the front for selfies and video chats and a side-mounted fingerprint sensor for security. Connectivity features include 5G, 4G LTE, Wi-Fi 6, Bluetooth 5.1, GPS, and USB Type-C for charging and data transfer.

As for the POCO F3 GT price in India, it will be around Rs 30,000, as confirmed by POCO India head Anuj Sharma in an interview earlier this week. We should learn more details when it launches next week.