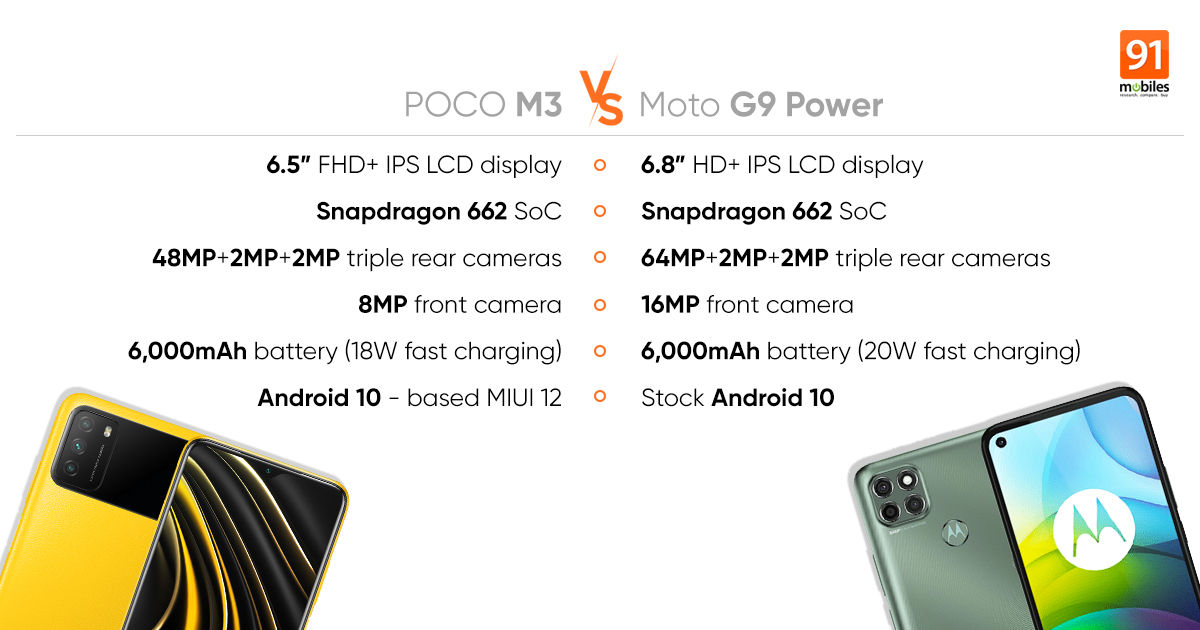 POCO M3 price in India and specifications were announced earlier this week and the smartphone is set to go on sale on Flipkart soon. For all intents and purposes, the POCO M3 is little more than a Redmi 9 Power minus a wide-angle lens. We have already taken a look at how the POCO M3 compares with the Realme 7i in the sub-Rs 12,000 segment. Now, we take a look at the POCO M3 specifications, prices, and design in comparison with the Moto G9 Power, which is another value-for-money offering in this segment. Does the POCO M3 have what it takes to power through this comparison? Let’s find out.

Also read: POCO M3 launched in India: is it better than Realme 7i?

The POCO M3 price in India starts at Rs 10,999 for the base variant with 6GB RAM and 64GB internal storage. The 6GB+128GB variant is priced at Rs 11,999. The Moto G9 Power, on the other hand, costs Rs 11,999 for the variant with 4GB of RAM 64GB of storage. Although both smartphones allow users to expand the storage further via a micro SD card, the POCO M3 offers slightly more RAM.

Although it is strictly a matter of perspective, many would agree that the POCO M3 looks more unique than the Moto G9 Power, primarily due to large camera island on the rear panel and the various colour options, including the POCO Yellow colourway. Furthermore, the POCO M3 has a layer of Corning Gorilla Glass 3 protecting its screen, something that is notably absent on the Moto G9 Power. The POCO M3’s waterdrop-style notch might come off as a bit dated compared to the Moto G9 Power’s hole-punch approach too. The Moto G9 Power opts for a rear-mounted fingerprint scanner, while the POCO M3 comes with a side fingerprint sensor.

Considering that both the POCO M3 and Moto G9 Power run an identical Qualcomm Snapdragon 662 chipset, it is hard to crown a winner in this segment. Therefore, it comes down to minor nuances such as software optimization and frequency of software updates. Many would argue that the POCO M3 is better because of its feature-rich software (MIUI 12 with POCO launcher on top). Others would argue that the bloat-heavy MIUI skin will begin to show its age over time. Like many other Motorola offerings, the Moto G9 Power runs a clean, customisation-free version of Android that is free from bloatware. That being said, it lacks several critical features such as an in-built screen recorder and the ability to take scrolling screenshots.

Both the Moto G9 Power and POCO M3 come with three rear cameras. Two of the lenses on both phones happen to be 2MP macro and depth sensors that we’ve seen on just about every mid-range smartphone released in 2020 and 2021. It all boils down to the primary sensors and the underlying software. The Moto G9 has a slightly better 64MP sensor, whereas the POCO M3 uses the same 48MP sensor found on several other Xiaomi, Redmi and POCO smartphones. It is also worth noting that the Moto G9 Power comes with a 16MMP selfie camera, while the POCO M3 uses an 8MP module. Our Moto G9 Power review found out that its camera performance was below-average despite the higher megapixel count. However, we can’t crown a winner here yet, as we are yet to test the POCO M3.

Both smartphones come with a large 6,000mAh battery, with the POCO M3 supporting fast charging at 18W and the Moto G9 Power at 20W. The extra 2W of power doesn’t mean much in the real world. We were quite satisfied with the battery life on the Moto G9 Power. Stay tuned to our full review of the POCO M3 to find out how well the phone performs in the battery department.