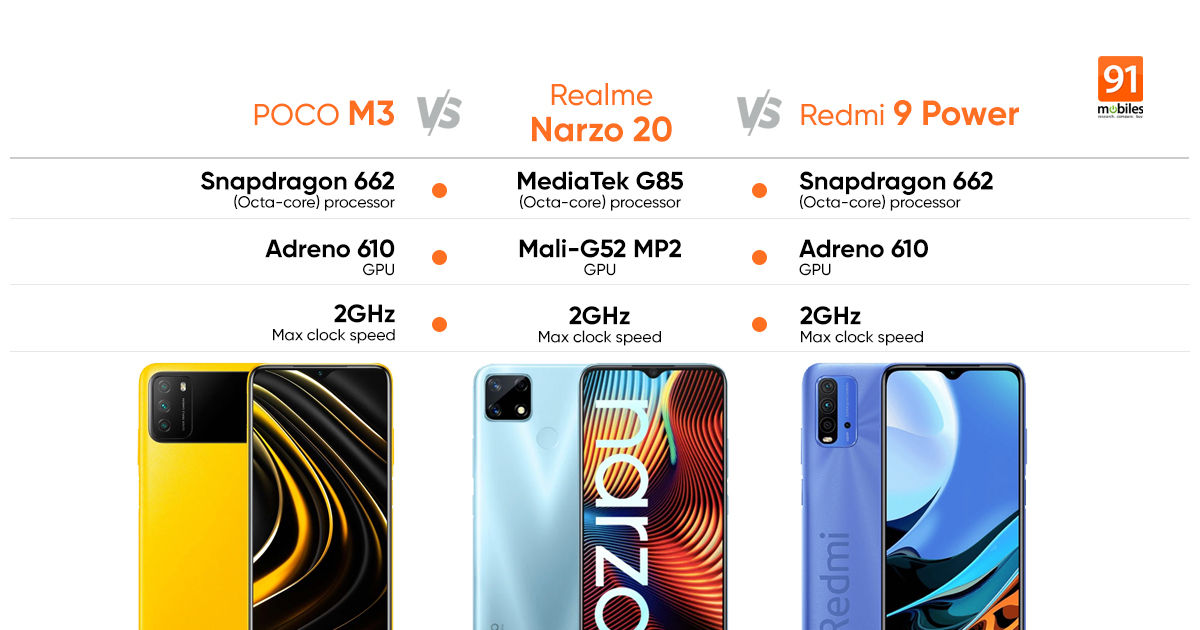 POCO just announced its latest offering in the budget smartphone market with the POCO M3 (review). Priced starting at Rs 10,999, the phone goes up against highly established players, including devices from former parent company Xiaomi. Apart from an extremely eye-catching design, the POCO M3 offers decent specs and a hefty battery backup. The devices in contention are the popular Realme Narzo 20 (review) and Redmi 9 Power (review) smartphones, both of which are priced similarly to the M3. In this particular comparison, you will see how all the three devices fare against each other as far as benchmarks and gaming are considered. The POCO M3 and Redmi 9 Power both house the Snapdragon 662 chipset while the Realme Narzo 20 gets the MediaTek G85. The interesting thing to note here is that none of the starting variants on the Redmi 9 Power and Narzo 20 come with 6GB RAM. However, both the POCO M3 variants available in the market feature 6GB RAM, with the higher end version getting 128GB of storage as compared to 64GB on the starting version. To keep things fair, all the tests have been run on 6GB RAM variants of the smartphones in contention. 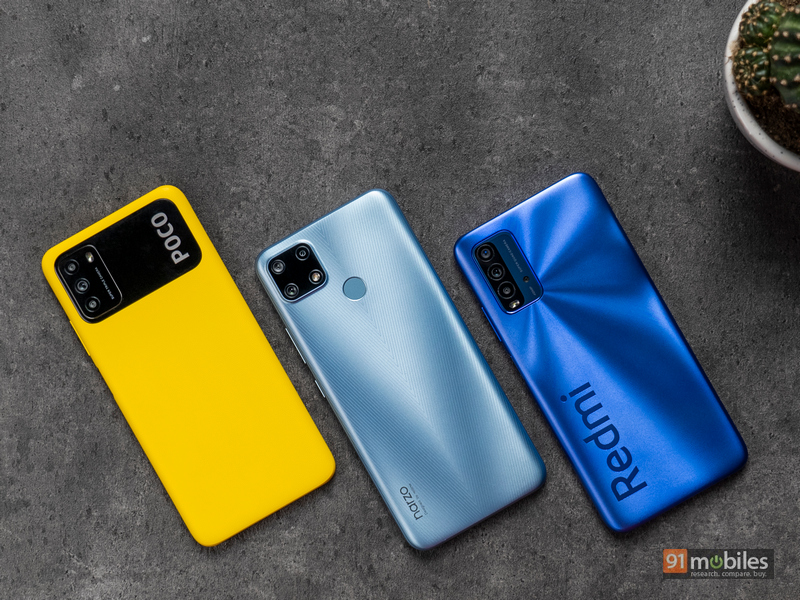 A very reasonable way of gauging a phone’s performance is by running a set of synthetic benchmark tests. While the Play Store is filled with such apps, the most popular ones are Geekbench 5, AnTuTu, GFXbench, and 3DMark. Each benchmark grinds the chipset and returns a score that can be used to compare with other devices. Amongst other things, the smartphone’s GPU, AI, and multitasking capabilities are also put to the test. 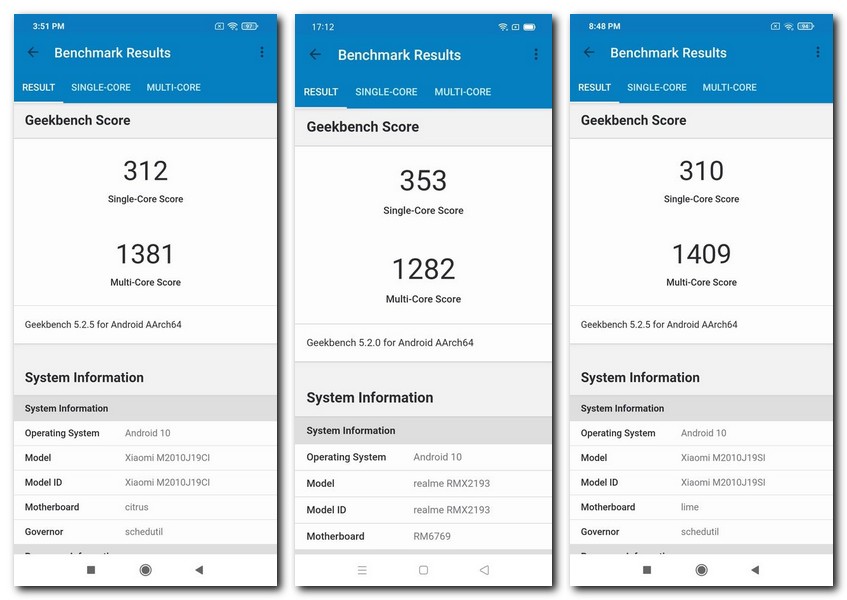 Let’s take Geekbench 5 first, one of the more popular benchmarks. It tests the CPU capabilities of the device and gives an aggregate score for single-core and multi-core tests. Now, the POCO M3 and Redmi 9 Power both use the octa-core Qualcomm Snapdragon 662 chipset. Even though it is on the lower end of the chipset spectrum, the 662 uses ARM’s big.LITTLE architecture wherein there are four performance cores going up to 2GHz and four efficiency cores going up to 1.8GHz. The Narzo 20’s MediaTek G85 SoC works along the same lines as well, but instead of four, it has only two performance Cortex A75 CPUs running at 2GHz and six efficiency Cortex A55 running at a 1.8GHz. Further, the Snapdragon 662 is made using an 11nm manufacturing process while the G85 uses a bigger 12nm process. This should theoretically give the Qualcomm SoC an edge with power efficiency and performance. The POCO M3 scored single-core and multi-core figures of 312 and 1,381 respectively. The same scores for the Redmi 9 Power were 310 and 1,409, while the Narzo 20 logged 353 and 1,282 respectively. From these scores, you can see that the Narzo 20 had the highest single-core score but at the same, its multi-core results are the lowest. A reason for this might be because of a lower number of performance cores on the G85. However, as a metric of real-life usage, all devices are more or less the same as far as performance is considered with the difference in score being largely negligible. 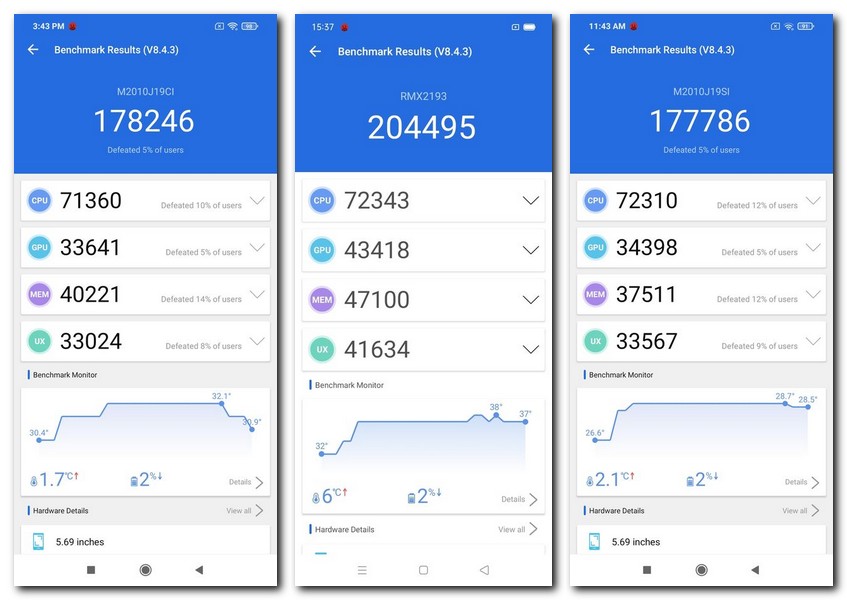 While Geekbench puts the CPU performance to the test, AnTuTu will take into consideration a lot of other aspects such as multi-tasking capabilities, GPU prowess, AI optimisation, and more. Based on this the device gets an overall score which is a culmination of various tests that are performed in the benchmark. The Qualcomm Snapdragon 662 has the Adreno 610 GPU while the MediaTek G85 comes with the Mali-G52 MP2. However, the latter can attain a 1GHz clock speed which is about 30 percent higher than the former. As such the Antutu score on the Narzo 20 is the highest at 204,495 while the POCO M3 hovers at 178,246 along with the Redmi 9 Power which is at 177,786. The GPU score for the Narzo 20 is 43,418 while the M3 and Redmi 9 Power are at 33,641 and 34,398 respectively. This gives the Narzo 20 an edge over the other two devices. 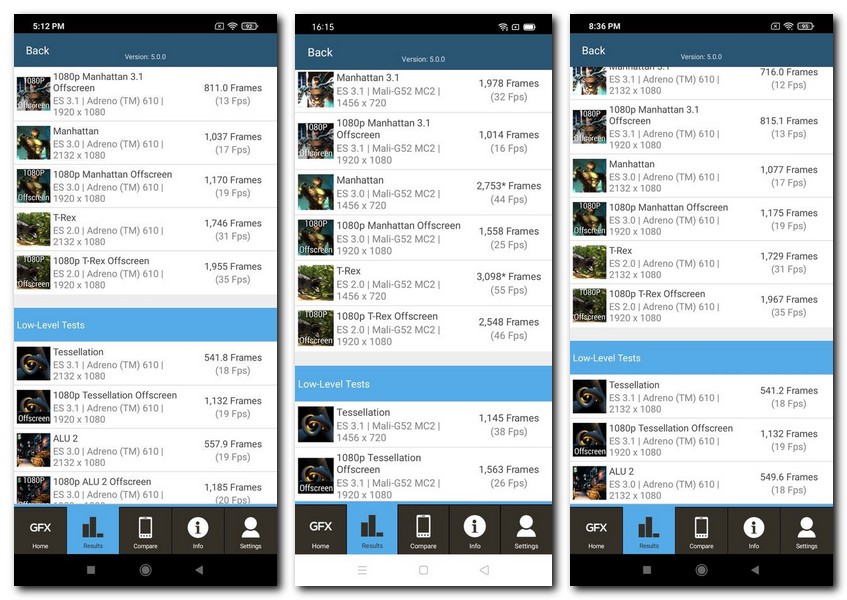 Both GFXBench and 3DMark paint a picture of how good the graphics capabilities are on the device. The POCO M3 and the Redmi 9 Power lack the distinct advantage the Narzo 20’s overclocked GPU has. On GFXBench, there are two popular tests, i.e. T-Rex and Manhattan, which provide a total fps count. Both the POCO M3 and Redmi 9 Power got a score of 31 and 17fps respectively in the two tests. The Narzo 20 effectively destroys both the devices with scores of 55fps and 44fps. 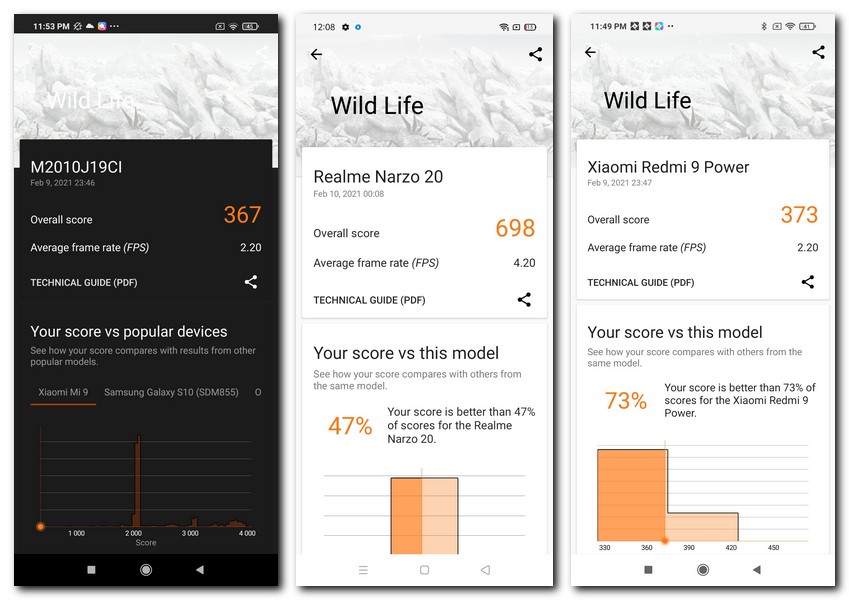 To make sure, I also ran 3DMark’s Wildlife test on all three devices. Here again, the Narzo’s score of 698 was significantly better than the POCO M3’s score of 367 and Redmi 9 Power’s 373.

It does seem clear that what the POCO M3 gains in the CPU and processing department, it loses about the same in graphics. From benchmarks, it emerges quite clearly that if you have some GPU intensive tasks at hand, then the Narzo 20 is definitely the better option. However, only by running a heavy game can we know for sure.

To evaluate the gaming prowess, I ran Call of Duty Mobile (CoD) on all three phones. The criteria for testing was basically to see what were the maximum graphics supported, the amount of battery drain, and rise in temperature during a 30-minute gameplay session. 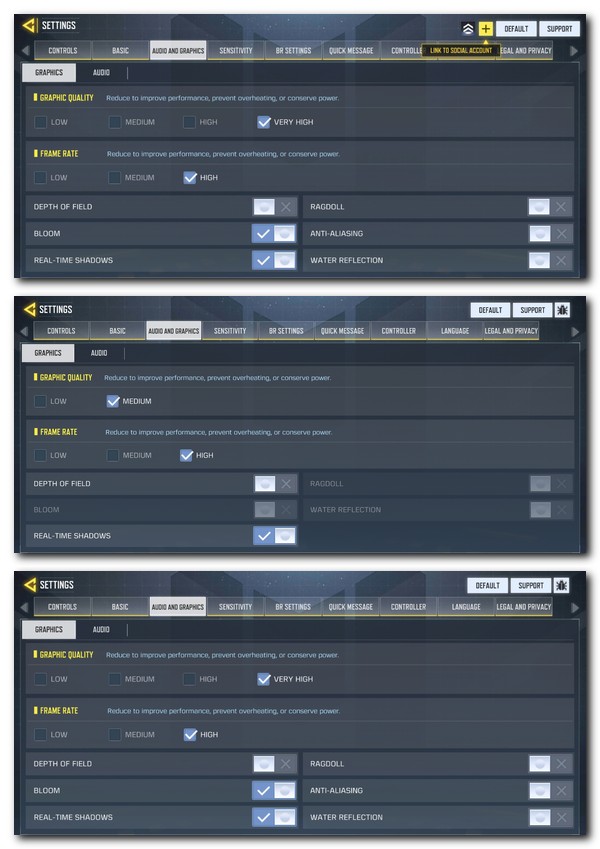 On the POCO M3, the graphics options available are Very High for the Graphics Quality (GQ) and High Frame Rate (FR). The Narzo 20 surprisingly revealed only a maximum of Medium GQ option and High FR. This does seem to be a problem plaguing Realme devices as earlier, the Dimensity 800U powered Realme X7 (review), a proper mid-range device, also displayed the same visual settings on CoDM. However, once inside the game, you get graphics and frame rate quality that are much higher than what the settings menu displayed. In the case of the Realme Narzo 20, the GQ was very much on par with the POCO M3 and the FR was actually a shade higher as well. Now you can’t expect a smooth 60fps on a budget device, but I got a constant 45fps on the Narzo 20 while the POCO M3 was a bit choppy at times. The Redmi 9 Power is also able to display the exact settings as the POCO M3 while the overall gameplay in terms of the frame rate was slightly better.

Looking at the rise in temperature and battery drop, I saw the POCO M3 start at 26 degrees and end at 37 degrees at the end of my 30-min gaming session. During this period, the device’s battery levels dropped by 14 percent. The Redmi 9 Power fared about the same with a rise of 12 degrees and a battery drop of 16 percent. The Realme Narzo again turned out to be the winner but only marginally with an 11 degree temperature gain and a 12 percent battery drop. However, this is more impressive as the Narzo 20 can churn out a better frame rate than both the competing devices.

The POCO M3 and Redmi 9 Power handle CPU tasks quite well, which can be attributed to higher number of performance cores. However, when it comes to raw GPU usage, the Narzo 20’s benchmarks beat the M3 and Redmi 9 Power. You also get better gaming performance and efficiency with the Narzo 20. One thing which works in favour of the POCO M3 is the starting 6GB RAM option which the other two phones don’t offer. Put simply, both the POCO M3 and the Redmi 9 Power can work quite well with normal multi-tasking and CPU-related activities. However, if you are looking to play intensive games, then the Narzo 20 seems to be the better choice.