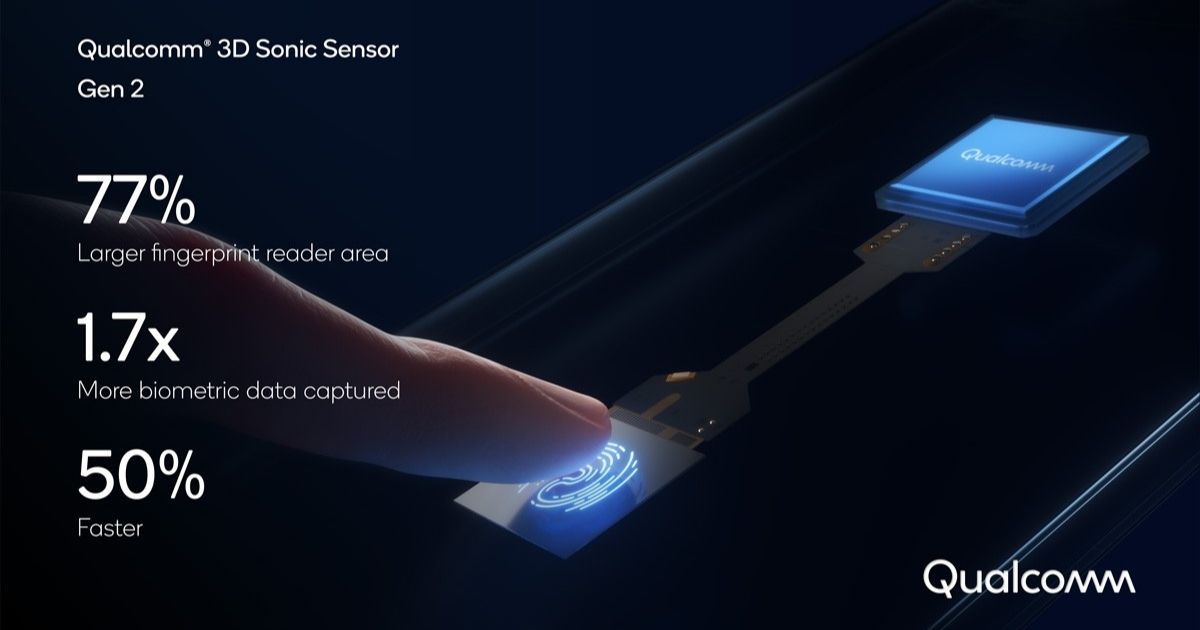 Qualcomm has unveiled the second-generation 3D Sonic Sensor with several improvements over gen-1. The 3D Sonic Sensor is an ultrasonic fingerprint reader that uses sound waves to scan a fingerprint and is mostly used as an in-display security solution. The first generation sensor had several drawbacks when compared to traditional optical in-display fingerprint scanners: it was slow, the accuracy was not as good, and the scan area was also smaller. With Gen 2, Qualcomm has worked on all those issues and introduced a product that’s much faster, offers a larger scanning area, and is also much thinner. The new sensor is also compatible with flexible panels that are used in foldable devices. Let’s take a look at some of the specifications of the new sensor.

Firstly, the 3D Sonic Sensor gen 2 has a 77 percent larger scan area when compared to the outgoing model. The previous variant measured 4 x 9 mm, whereas the new sensor comes in at 8 x 8 mm. The new scanner can capture up to 1.7 times more biometric data thanks to the larger scanning area. This also means that users will now be able to easily find the scanner and accurately unlock their device. The sensor is 50 percent faster, and 0.2 mm thick, which makes it possible for the new scanner to be included in flexible displays. And unlike optical scanners that have trouble scanning wet fingers, ultrasonic sensors can do it without any issues.

According to Qualcomm, devices with Gen 2 3D Sonic ultrasonic scanners should start rolling out in Q1 2021. It is highly likely that the upcoming Samsung Galaxy S21 would use the new sensor. Even newer Galaxy Fold devices could feature an ultrasonic scanner thanks to the improvements with gen 2. We will have to try the new sensor to find out if it’s really as good as Qualcomm claims.