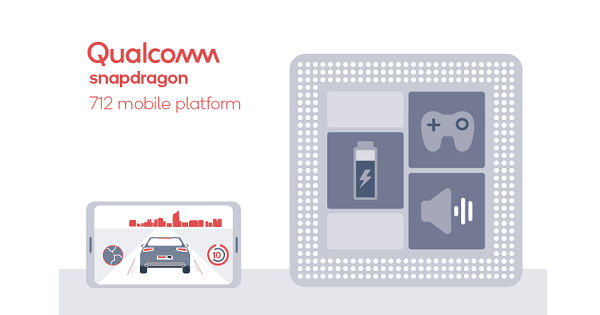 World’s largest chipmaker Qualcomm has introduced the second chipset under its upper mid-range Snapdragon 700-series, dubbed the Snapdragon 712. The new SoC is just a new iteration that brings slightly better performance (10 percent to be exact) compared to its sibling Snapdragon 710. The latter was announced last year with the 10nm process (same as the Snapdragon 845 SoC), 8x Kyro 360 cores, Adreno 616, X15 LTE, and Quick Charge 4+ tech.

The new Snapdragon 712 SoC offers almost the same specifications as its sibling; however, the eight Kyro 360 cores are now said to run at 2.3GHz compared to 2.2GHz. Other than that the Snapdragon 712 is said to pack better Bluetooth audio, owing to the TrueWireless Stereo Plus and Broadcast Audio technologies. That’s the only major differences between the two Snapdragon 700 series SoCs. Qualcomm claims that the Quick Charge 4+ tech can juice up a device from 0 to 50 percent in just 15 minutes.

Therefore, the Snapdragon 712 also boasts of the same graphics thanks to Adreno 616 GPU and Hexagon 685 DSP. For connectivity, the SoC houses a Qualcomm’s Snapdragon X15 that supports LTE Cat.15 downlink and Cat.13 uplink, reaching peak speeds of 800Mbps and 150Mbps respectively. In terms of cameras, it has offers support at up to 20-megapixel dual cameras or 32-megapixel single sensor with Spectra 250 ISP.

“With all the premium features of the Snapdragon 710 plus new performance enhancements, our newest mobile platform packs virtually everything needed to deliver an elevated mobile experience. Whether you’re a gamer, photographer, or just someone who wants an incredible mobile experience, Snapdragon 712-powered smartphones will be there to deliver it,” Qualcomm said in its press release.