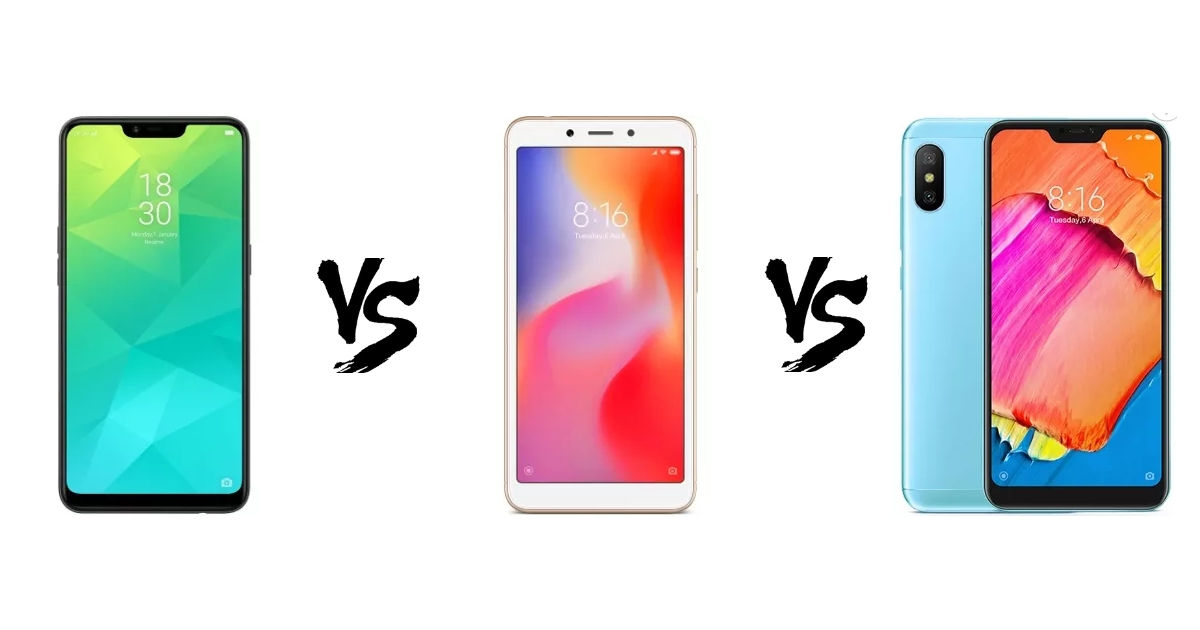 Home Comparisons Realme 2 vs Xiaomi Redmi 6 vs Redmi 6 Pro: which is...

“Both the Realme 2 and Redmi 6 Pro come with a display notch, while the Redmi 6 continues with a tall screen”

Over the last few years, the budget segment in the Indian handset market has grown leaps and bounds. While Xiaomi has made a name for itself in this category with its Redmi series, its supremacy is being challenged by a new brand in the town — Realme. The company was recently spun off as an independent entity and it has just launched the Realme 2, after introducing the blockbuster Realme 1. Xiaomi on the other hand, just took covers off the Redmi 6 and Redmi 6 Pro, both of which are available in a similar price range. If you’re looking for a capable budget smartphone, you are bound to be confused between these three smartphones. To make it easier for you to arrive at a decision, we have compared the Realme 2 with the Redmi 6 siblings to see which one comes outs on top.

If you’ve used a smartphone from Xiaomi before, then you’ll find both the Redmi 6 and Redmi 6 Pro to be a familiar sight. The smartphones come with generic designs and are crafted from polycarbonate. The duo gets a fingerprint scanner and a dual-camera module on the rear panel along with a loudspeaker grille. The Redmi 6’s fascia is adorned by a 5.45-inch HD+ display with an aspect ratio of 18:9. The ‘Pro’ sibling on the other hand, sports a 5.84-inch panel with a notch up top and a sharper full HD+ resolution in 19:9 format.

In comparison, the Realme 2 is clearly a looker with a shiny design that features a unique diamond cut pattern on the back. The pattern on the rear cover bounces off the light in different directions, adding to the charm. In terms of elements at the back, you’ll find a pair of cameras in the top left, fingerprint scanner in the centre and Realme branding at the bottom. For visuals, you get a large 6.2-inch panel with a resolution of 1,520 x 720 pixels and an aspect ratio of 19:9 to accommodate the notch. This ensures that the phone has minimal bezels and an impressive screen-to-body ratio of 88.8 percent.

No prizes for guessing which smartphone gets our vote when it comes to aesthetics. With the Realme 2, not only you get a larger display, but a flaunt-worthy phone as well.

Moving on to the performance, the Realme 2 features the Qualcomm Snapdragon 450 chipset, while the Redmi 6 is one of the first MediaTek-powered smartphones from the brand in India after a hiatus and features the Helio P22 SoC. In contrast, the Redmi 6 Pro is equipped with the Snapdragon 625 processor. All three handsets are available in two RAM and storage configurations – 3GB + 32GB, and 4GB + 64GB. The phones also support expandable memory of up to 256GB with the use of microSD cards.

As far as the performance is concerned, the Realme 2 is at par with the Redmi 6 siblings. Even though the SD625 chip powering the Redmi 6 Pro might seem to be better than the Snapdragon 450 silicon fuelling the Realme smartphone, they offer the similar experience even while playing the latest phenomenon like PUBG.

In terms of the software, the Xiaomi Redmi 6 duo boots Android 8.1 Oreo-based MIUI out of the box. On the other hand, the Realme 2 comes with OPPO’s ColorOS based on Android 8.1 Oreo. While it comes down to personal preferences, both skins come with custom themes and useful optimisations.

The trio comes with a pair of cameras on the back, with the secondary sensor being a depth-sensing unit. Specs-wise, the Realme 2 comes with 13MP + 2 MP shooters, while Xiaomi’s Redmi 6 and 6 Pro sports 12MP + 5MP snappers. While the setup seems similar, considering the secondary sensor is only useful while capturing bokeh images, slightly higher resolution of the primary camera gives the Realme 2 slight edge.

The Realme 2 also has the Xiaomi smartphones beat when it comes to the battery as the former flaunts a massive 4,320mAh pack. In contrast, the Redmi 6 draws fuel from a significantly smaller 3,000mAh cell, whereas the Redmi 6 Pro sips juice from a 4,000mAh unit.

The price of the Realme 2 starts at Rs 8,999, while the 4GB RAM version carries a price tag of Rs 10,999. As opposed to that, Xiaomi Redmi 6’s base model will set you back by Rs 7,999, whereas the default variant of the Redmi 6 Pro costs Rs 10,999. The Redmi 6 is surely the most affordable handset among the trio, but it does seem to cut some corners in aspects like battery life. And while the Redmi 6 Pro offers some impressive features, it also is priced higher in comparison. All said and done, the Realme 2 comes across as a more value-for-money offering and is an all-rounder choice around Rs 10k, for it brings forth features like a modern notch display, a head-turning design and a powerful battery.