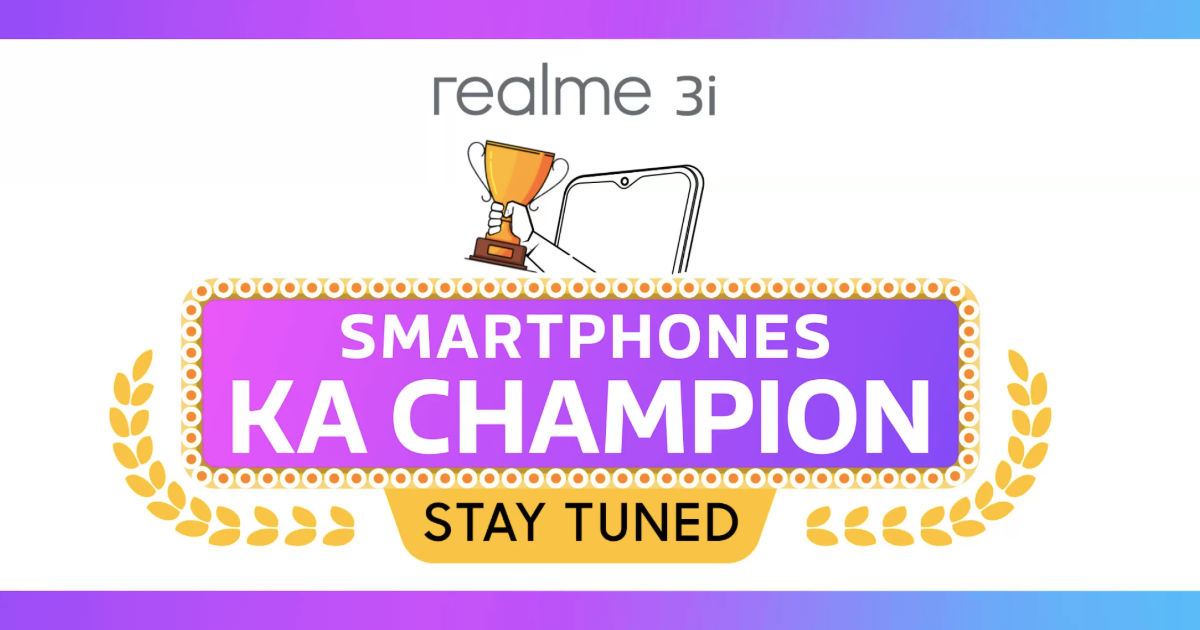 “The Realme 3i Flipkart listing touts features such display, battery, camera, and style for the upcoming smartphone”

A new Realme 3i smartphone will be launching in India soon, the company has revealed via a listing on e-commerce platform Flipkart. While the Realme 3i Flipkart listing doesn’t mention when the smartphone will be unveiled in the country beyond that it is “coming soon,” we can expect it to break cover on July 15th, alongside the Realme X (first impressions). Since the Realme 3i is a new smartphone altogether, there is no information about the handset available at present. However, we can expect details to start spilling over the next few days, as has become the norm these days.

In the Flipkart listing, the Realme 3i is being promoted as the ‘Real champion’ and ‘Smartphones ka champion’. The phone is also touted as the most-stylish, big battery, display, and camera champion. Unfortunately, the teaser doesn’t reveal much else about the handset, except that it will come with a display with waterdrop notch. The Realme 3i will most like be a budget offering that could bridge the gap between the brand’s Realme C2 and Realme 3 smartphones, which are priced in India starting at Rs 5,999 and Rs 8,999 respectively.

Other details such as Realme 3i specifications, price, and availability is not known at the moment. The Realme X, meanwhile, will come with a pop-up selfie camera design. The handset will also boast of an in-display fingerprint scanner, mid-range Snapdragon 710 SoC, and a 6.53-inch AMOLED display with 1,080 x 2,340 pixels resolution. The phone will rock a 48-megapixel primary sensor coupled with a 5-megapixel secondary sensor, while on the front, it has a 16-megapixel shooter for selfies and video calling.

The Realme X will boot Android ColorOS 6, which is based on Android 9 Pie and house a 3,765mAh battery with fast-charging support. The handset has already been launched in China with 4GB + 64GB, 6GB + 64GB, and 8GB + 128GB storage configurations. The company’s CEO had previously revealed that Realme X price in India will be under Rs 18,000 and there will be a special Spider-Man edition of the handset as well.