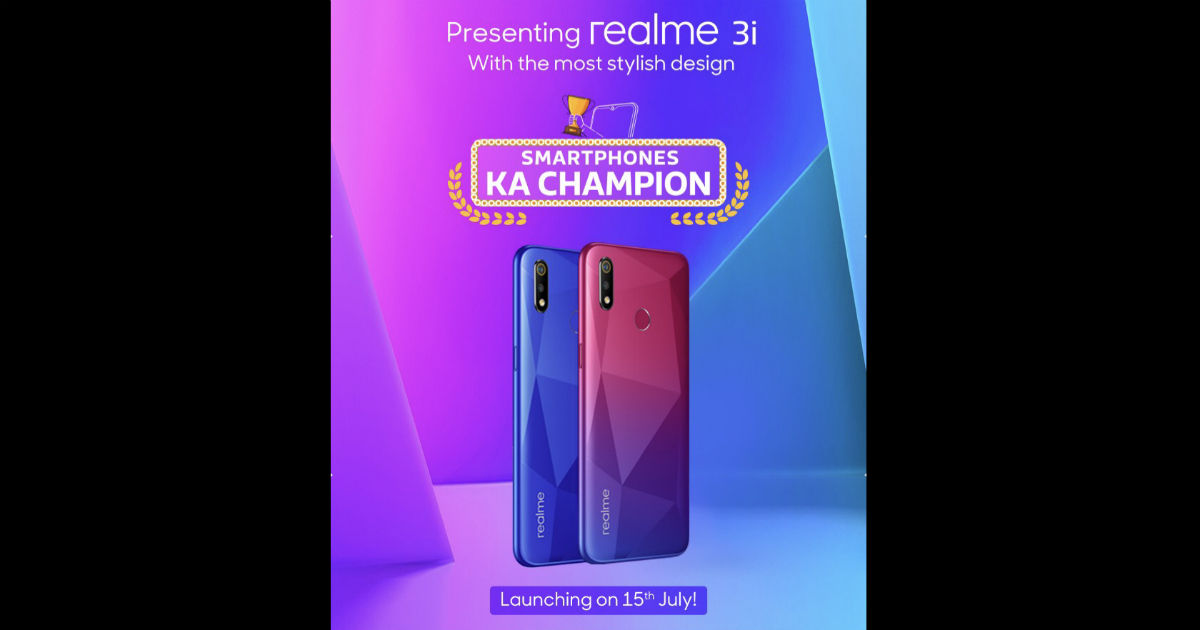 “The Realme 3i listing also confirms the smartphone will have dual rear cameras, diamond-cut rear casing design, and fingerprint sensor on the back”

Realme 3i smartphone was confirmed yesterday via a Flipkart listing yesterday, though the specifications of the smartphone remained under wraps. Now, an updated Flipkart listing has revealed the Realme 3i will be powered by the MediaTek Helio P60 processor and 4,230mAh battery. This nearly confirms the specifications that were revealed yesterday via Geekbench, showing the smartphone will be powered by octa-core Helio P60 SoC running at 1.99GHz clock speed. We can also expect the 4GB RAM and Android 9 Pie-based custom OS. Moreover, the Realme 3i India launch date has been confirmed as July 15th by the listing.

In the updated Flipkart listing, Realme asks fans to participate in a challenge. One of the answers in the question reveal the smartphone will feature the MediaTek Helio P60 processor and 4,230mAh battery. The listing also mentions the smartphone will have a gradient diamond-cut design, dual rear cameras, and rear-mounted fingerprint sensor. While the gradient colour has a mix of red and blue, there is also an all-blue colour option shown on the listing page. However, the brand has not given a glimpse of the device’s front panel, so we will have to wait a little before we find out what it exactly looks like.

These Realme 3i specifications have confirmed the speculation around the positioning of the upcoming smartphone. It was said the smartphone will be positioned between the Realme 3 (Helio P70) and Realme C2 (Helio P22) models. We should learn more about the smartphone at the July 15th, where the brand will also unveil the Realme X smartphone, its first smartphone with a pop-up selfie camera module.

The Realme X offers features such as Snapdragon 710 SoC, 6.53-inch full-HD+ screen, in-display fingerprint sensor, and 16-megapixel selfie camera. It also has a dual camera setup on the back, featuring a 48-megapixel primary sensor and a 5-megapixel depth sensor. It has a 3,765mAh battery with 20W fast-charging, USB Type C port, and comes in 4GB + 64GB, 6GB + 64GB, and 8GB + 128GB variants.