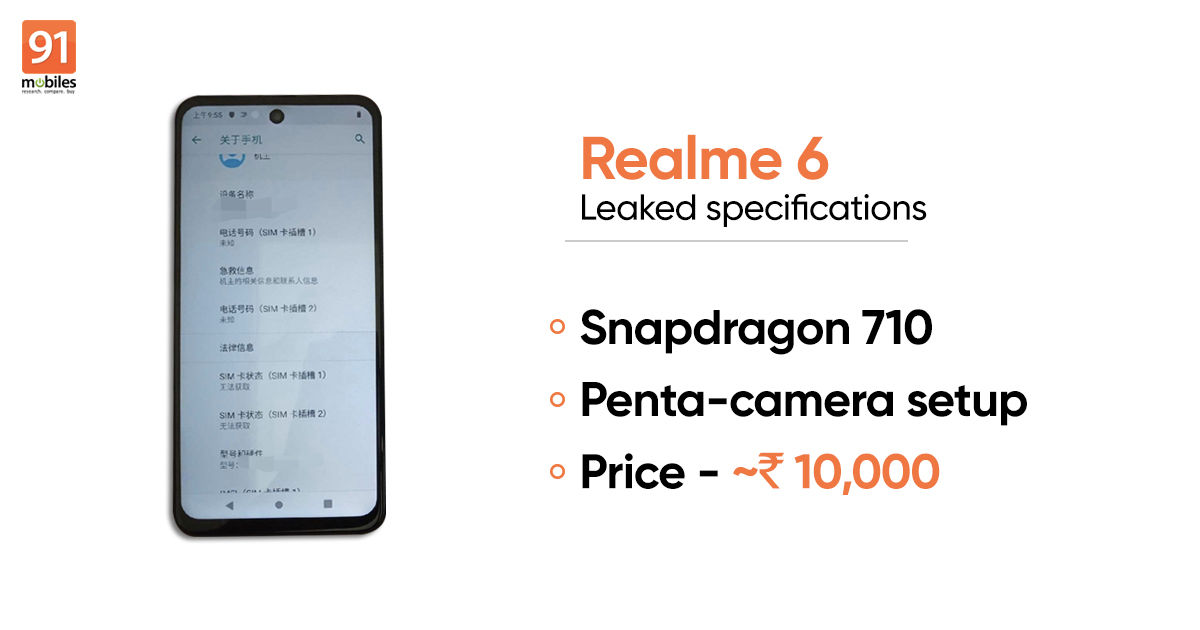 “The Realme 6 price will be reportedly around RMB 1,000 (about Rs 10,000) and the images show it will have a centre-aligned hole punched in the display”

Realme 6 definitely seems to be in development even as the company is gearing up to launch the Realme X2 Pro in India on November 20th and Realme XT 730G in December. The handset’s alleged retail box packing surfaced online recently, revealing the Realme 6 would feature a penta camera setup at the back and ship with the Snapdragon 710 SoC. While the authenticity of that leak is questionable, the purported live images of the Realme 6 have leaked now. The tipster on Weibo also says the Realme 6 price will be around RMB 1,000 (about Rs 10,000) and that the handset will launch in 2020.

The Realme 6 leaked live images show the complete fascia of the phone, which is headlined by a centre-aligned punch-hole cutout and slim bezels above the screen and on the sides. Like most Android phones, the chin is quite thick. It looks like Realme 6 is still in the testing phase, as one of the Realme 6 devices in the image seems to have AOSP version of Android installed while the other is blurred out, but the ColorOS icons are visible. Another live image shows the Settings page in the Chinese language, but it doesn’t reveal any specifications apart from the fact that it’ll have dual SIM slots. Given the recent developments, Realme 6 surely sounds like a worthy and substantial upgrade over the Realme 5 series that is still around a couple of months old now.

Separately, Realme’s market share grew from a mere 3 percent in Q3 2018 to 18 percent in Q3 2019 in India, according to Counterpoint Research. Realme claims to have shipped over 10 million units in Q3 2019, which is a massive 808 percent year-on-year growth. Counterpoint global shipments data shows that Realme has become the top seventh biggest smartphone vendor by shipments in the world in Q3 2019, up from 47th a year ago. India and Indonesia accounted for 80 percent of its shipments.